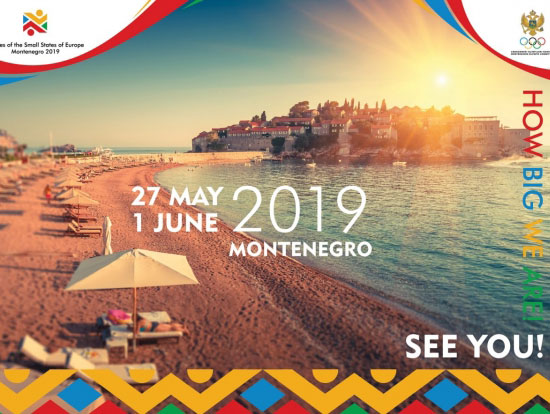 18° GSSE WILL KICK OFF IN MONTENEGRO ON MONDAY 27 MAY!

The 18th Games of the Small States of Europe (GSSE) will start in Montenegro on 27 May.

The Opening ceremony is set to take place in Budva Old Town at 21 pm, expecting around 2,000 people attending the event, including athletes and officials from the European National Olympic Committees of Andorra, Cyprus, Iceland, Liechtenstein, Luxembourg, Malta, Monaco, Montenegro and San Marino.

Every two years since 1985, the GSSE have given the smallest nations in our continent a platform to shine, on a rotating basis. But this year’s edition is special in that it will be Montenegro’s first time hosting the multi-sport event after becoming the last country to join the GSSE, in 2009.

The local organisers are understandably eager to welcome Europe to the five beautiful towns of Bar, Budva, Cetinje, Podgorica, and Tivat, which will share the responsibilities of hosting from 27 May to 1 June 10 different sports: athletics, swimming, judo, shooting, tennis, table tennis, basketball, volleyball, beach volleyball, and bowls.

It will be a historic moment for Montenegro, which will be looking to showcase itself on the continental stage and prove that it is capable of hosting major sports events.

Organising the GSSE will also provide Montenegro and its citizens with a number of positive legacies. The concept of the Games of the Small States of Europe initially received the support of then-International Olympic Committee President Juan Antonio Samaranch, who saw them as an important vehicle with which to deliver the Olympic values of friendship, excellence and respect.

Montenegro is also likely to see an increase in the number of people practicing sport during and following the event, in addition to job creation and the strengthening of volunteerism in the country.

“I have no doubt that the Montenegrin NOC and the local organising committee will be up to the task,” said EOC President Janez Kocijančič. “I wish them every success during the final phase of preparations for what will be a terrific edition of the Games”.

“I was never convinced that the top sports events belong only to the big and mighty,” Kocijančič added. “With the Games of the Small States of Europe, the European Olympic Committees once again pave the road to a better Olympism.

“The 2019 GSSE could be the first of many future sports events for the country, including the European Youth Olympic Festival or even the Youth Olympic Games. With a motto like “How Big We Are,” I am sure they will also be dreaming big as well,” Kocijančič concluded.