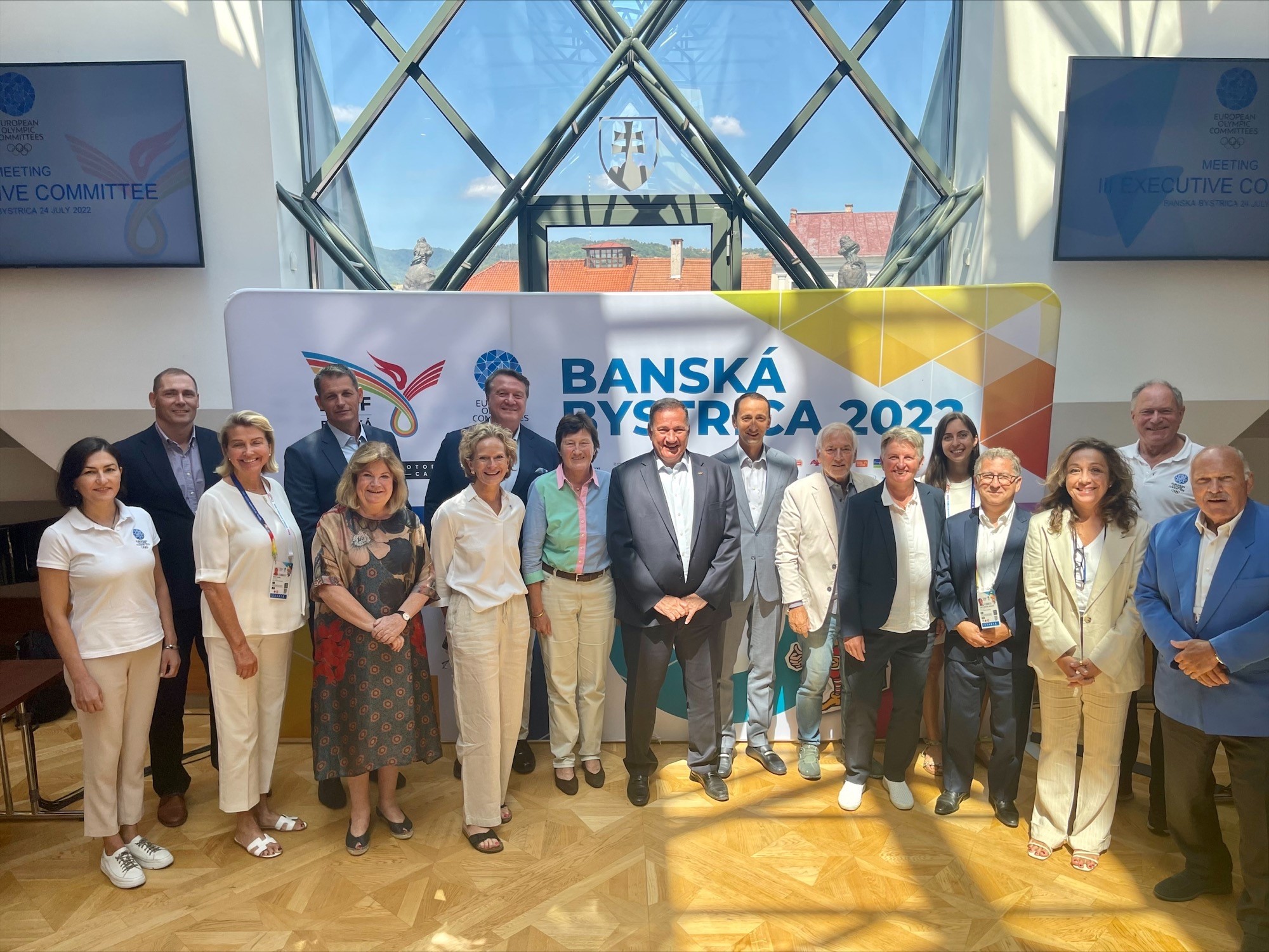 The EOC Executive Committee (ExCo) met at the City Hall in Banska Bystrica, Slovakia during the 16th edition of the Summer European Youth Olympic Festival, which takes place from 24-30 July in the Slovak city. The highlights of the ExCo meeting are as follows.

• Shared a message on behalf of IOC President Thomas Bach. Thanked the IOC for their ongoing support and collaboration to advance the European Olympic Movement.
• Provided an update from the Mediterranean Games Oran 2022.
• Updated the ExCo on key Presidential activities since the last ExCo meeting, including attendance at:
o EU Sport Forum in Lille.
o European Evening of Sport in Brussels.
o Fair Play Award in Budapest during FINA World Championships.
o 50th anniversary of the Olympic Games Munich 1972.
o NOC of Azerbaijan 30th anniversary – an EOC delegation will attend its celebrating events in Baku on 11 November 2022.

• Together with legal team, provided an updated the ExCo on the status of the Russian Olympic Committee’s appeal to CAS related to the EOC General Assembly in Skopje.
• Proposed to appoint a “dispute-resolution committee” of three members in order to internally remedy to the ongoing dispute with the Russian Olympic Committee. The ExCo approved this proposal and appointed Raffaele Pagnozzi, Peter Mennel and Zlatko Matesa.
• Received approval from the ExCo of the EOC’s new Code of Ethics. NOCs will now be asked to approve the Code of Ethics. Congratulated the EOC Ethics Commission for their work on this.
• Reiterated support of the European Model of Sport, following the recent European Super League appeal hearing at the European Court of Justice.

• Shared an updated draft budget for the European Games 2023, illustrating its various items and confirming that, unless exception cases occur, there is a surplus.
• Informed that the EOC will cover the entry fee of the Ukrainian Team at the EYOF Banska Bystrica 2022.

• Confirmed first Coordination Commission meeting will take place on 12-13 October in Krakow.
• Received approval from the ExCo on the requirement to appoint a PR agency in Poland to support with communications around the European Games.
• Shared that there are plans in place for the recruitment of 8,000 volunteers.
• Noted that the main Athletes’ Village will be based in Krakow University’s residence halls and the university have changed holiday dates for the students so that they can accommodate athletes during the Games.
• Expressed full confidence in the Organising Committee and the EOC to jointly deliver a spectacular third edition of Europe’s premier sports event.

• It was agreed that Commission Chairs will present at the EOC Seminar this year in Olympia (30 September – 1 October).
• ExCo member and Sustainability and Active Society Commission Chair Berit Kjøll reiterated importance of EOC progressing towards signatory status of the UN Sport for Climate Action framework.
• It was agreed that the EOC will take the lead on sustainability in the European Olympic Movement by signing the UN Sport for Climate Action framework and will be aligned with ANOC, which is already a Signatory, to advance this effort and encourage NOCs to become signatories too.