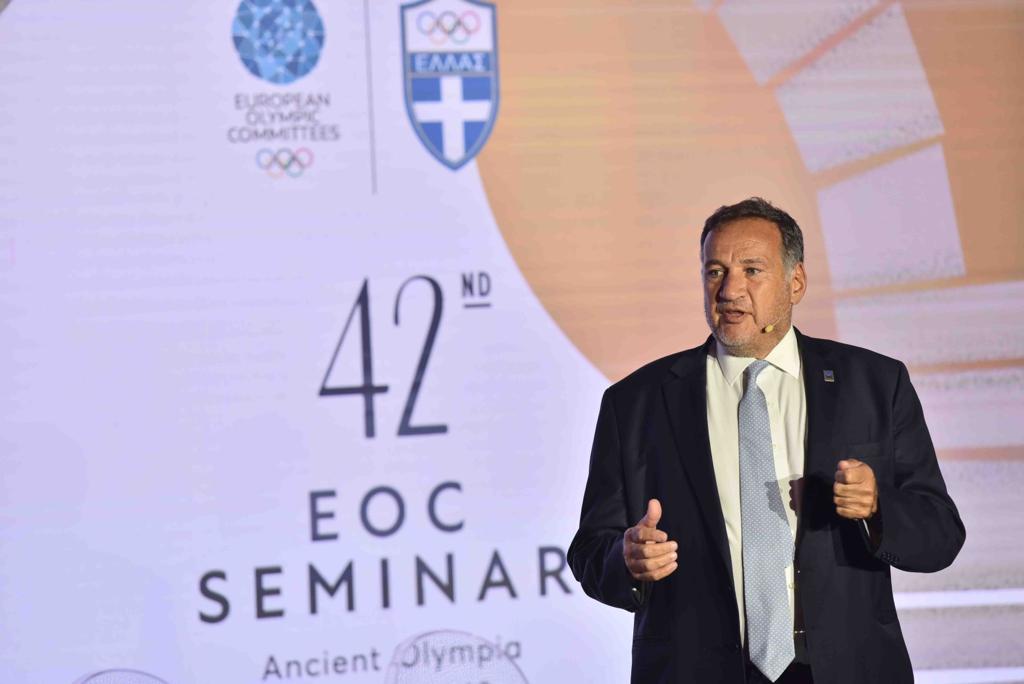 The 42nd EOC Seminar came to a close today at the International Olympic Academy in Olympia, Greece with productive sessions on Marketing & Communication and the EOC’s Sports Programme.

The day began with a presentation by the Chair of the Coordination Commission for the European Games Krakow and Malopolska 2023, EOC Executive Committee member Hasan Arat. Arat described the initial challenges and opportunities the Organising Committee faced in preparation for the Games.

“We had difficult times but we never lost our trust. My Polish colleagues, it has been a pleasure to work with you so far, and together, we will build a great European Games,” Mr. Arat said in his closing comments.

President of the Polish Olympic Committee Andrzej Kraśnicki and the President of the Organising Committee Marcin Nowak provided an update on the progress being made on the sports facilities, athletes’ accommodation and operations. Mr Nowak confirmed that the majority of sports would have an equal number of men and women participating. Additionally, President Kraśnicki noted that this edition of the European Games would have the most Olympic Games qualifying events in the competition’s history.

A discussion on Marketing, Communications and social media followed with a panel featuring representatives from Team Great Britain, together with the Portuguese and Slovenian NOCs, where they shared innovative approaches to marketing. The social media panel focused on methods to engage with the youngest generation and strategies specifically targeted to small NOCs. Secretary General of the National Olympic Committee of Slovakia, Josef Liba, described to delegates how organising the EYOF Banska Bystrica 2022 impacted the NOCs social media performances in an absorbing presentation.

Chair of the Organising Committee for EYOF Banska Bystrica 2022 Peter Hamaj shared the final report on the success of the event and explained the plans to leave a legacy for the school children in the community. He highlighted the gender equality amongst the young athletes who participated at the event, which was almost equal, and explained the integral role that the 1,032 volunteers played in ensuring that the competition could operate at a high standard.

The 16th Winter EYOF will be held in Friuli Venezia Giulia, Italy. Presentations on preparations for the event were delivered by the General Director of the Organising Committee Giorgio Kaidisch and the Chair of the Coordination Commission Borut Kolic.

Reports were then given on the 17th Summer EYOF in Maribor by the Director of the Organising Committee Natasa Ritonija and the Chair of the Coordination Commission Guro Lium.

In conclusion, EOC President Spyros Capralos thanked all the delegates and panellists for their participation in the Seminar before providing his insights on the discussions.

“I want to thank all the delegates that have participated over these last two days. Cooperation and communication are the best methods to lift each other up and safeguard the future of European sport. We are here in Ancient Olympia, the birthplace of the Olympic Truce. Now, more than ever, we must ensure that these sacred values are respected, protected and prioritised not only in our sporting activities, but in all aspects of life on our continent. The European Olympic Committees must continue to work together and we need to be united for the sake of our athletes and young athletes, who dream of competing in a peaceful environment,” he said.

You can read about the highlights from Day 1 here.