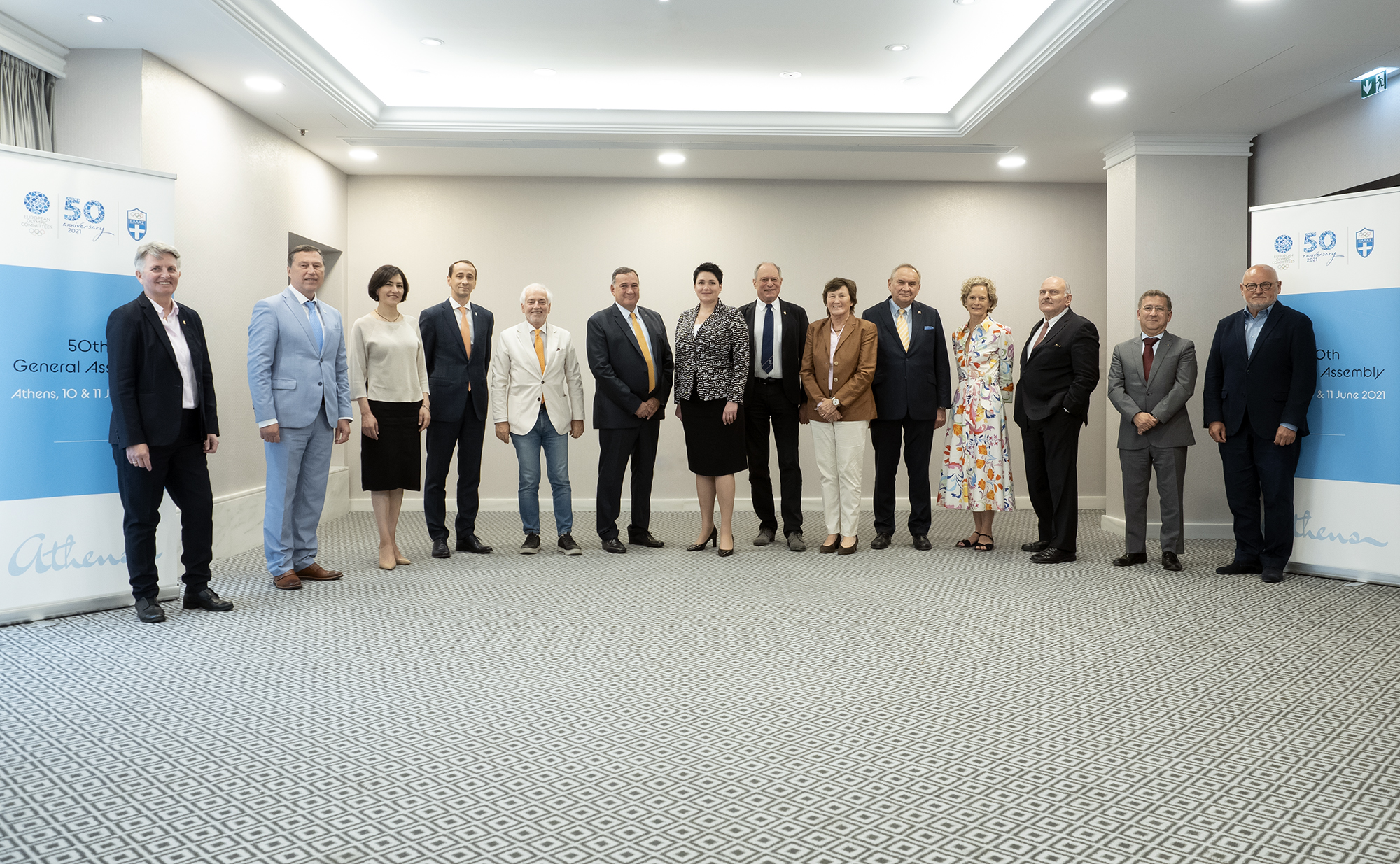 The milestone 50th Anniversary General Assembly of the European Olympic Committees (EOC) came to a close today in Athens, with the umbrella body for the continent’s 50 National Olympic Committees looking confidently toward the future.

EOC Executive Committee Member and Chair of the EOC Strategic Agenda 2030 Working Group Djordje Visacki provided a report together with external consultant Jon Tibbs on the initiative to help shape the direction of the organisation over the next decade.

Tibbs mentioned that there was a 100 per cent response rate from the 50 NOCs to an online questionnaire and interviews conducted together with market research consultancy Quantum. The consultation phase focused on four key themes – EOC governance and organisational structure, EOC sports events, EOC support for NOCs, and EOC relationships with key stakeholders – and looked to answer four questions: Where the European Olympic Movement is now and why? Where it wants to be and why? How does is get there? And how does it show it is getting there?

“Ten recommendations will serve as a useful tool for the newly elected ExCo to define the strategic plan. It can be a cornerstone for the strategic vision of the EOC,” said Visacki. “The Second Phase is now on the shoulders of the new ExCo. It is the opinion of the Working Group that it is very important that we finish the document by the end of the 2021 so we can start implementing next year.”

EOC Executive Committee Liaison Member with the EOC EU Commission Jean-Michel Brun gave an impassioned presentation on the “tragic importance” of the EOC and IOC in safeguarding the European Sport Model, which continues to come under attack from purely commercial interests.

Brun was followed on stage by EOC EU Commission Chair Juri Tamm and Director of the EOC EU Brussels Office Folker Hellmund, who spoke about the many activities being undertaken with regard to the European Sport Model, funding opportunities for sport, gender equality, sustainability and other ways to improve the position of sport and its influence in Europe.

Sebastien Gillot of the World Anti-Doping Agency (WADA) provided a detailed presentation on the entry into force of the 2021 World Anti-Doping Code on 1 January, with a focus on what NOCs can do to contribute by educating their athletes. Updates were also given on the work being done to review WADA’s governance, the Independent Observer Program for the Tokyo 2020 Olympic and Paralympic Games, and an introduction to Dried Blood Spot (DBS) testing, the technology for which is expected to be rolled out in the next few years.

Peace & Sport’s Director of International Relations & Sport Diplomacy Iris Vlachoutsicos presented a trophy for the Peace And Sport Award – April6 Initiative of the Year 2020 to the National Olympic Committee of Kosovo, which won for its #WhiteCard contest that attracted 5,000 participants. The trophy was accepted by NOC President Ismet Krasniqi.

The meeting concluded with a handover from EOC Acting President to newly elected EOC President Spyros Capralos. Capralos vowed to work on behalf of all 50 National Olympic Committees, of which representatives from 46 were able to travel to Greece for the special 50th Anniversary General Assembly.

“I’d like to reinstate how honoured I am to have this opportunity to lead the European Olympic Committees, and pledge to do my best to further elevate European Sport in challenging times,” he said. “I have listened to you, and I am confident we will all join forces to ensure we keep the wheels turning by enriching and establishing European sport high in the global sports chart.

“We need to fight together to get for sport a fair share from our government’s budget for the recovery funds after the pandemic. We share many of the same concerns and see the same challenges, but we also have the right armour to turn these challenges to unique opportunities.”

Capralos also announced that he had asked Nygaard to become Vice Chair of the Coordination Commission for the European Games 2023, a role that the Dane accepted.