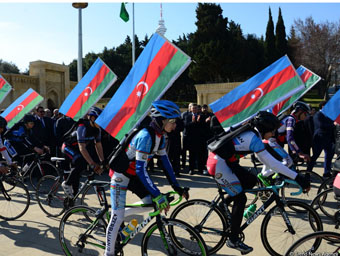 AZERBAIJAN –  Today, 5 March is the Day of Physical Culture and Sports in Azerbaijan, according to a decree enacted by President Ilham Aliyev in 2005.

The celebration of the day on this date is not accidental. National Leader Heydar Aliyev met at the Baku Sports Palace on 5 March 1995 with the champions and prize winners of the world and European championships. That day he established the Sports Foundation and launched a new strategy on the development of physical culture and sports.

10 years later, in 2015, Baku hosted the inaugural European Games. The big multi-sport event was a great milestone in the sporting life of Azerbaijan.

The 2012 EOC General Assembly decided to grant Azerbaijan the right to be the first host city of the European Games, so putting the country into international limelight.

A series of sports events devoted to the date are being held in the country, organised by the Azeri Ministry of Youth and Sports.

The attention of the Azeri President towards sport and athletes together with a number of initiatives to set up new Olympic sports centres are just some of the contributions to the future development of Azeri sports, as well as a way to raise awareness on the Olympic values. Not only in the capital Baku, but also in different regions of Azerbaijan modern Olympic centres have been commissioned for youth.

First Lady and President of the Heydar Aliyev Foundation as well as of the Azerbaijan Gymnastics Federation Mehriban Aliyeva has also made a great contribution to Azeri sports.

Azeri sports are indeed experiencing a period of rampant growth. The promotion of a healthy and active lifestyle of the youth of the country is a key priority for the Azeri government. For this purpose, national strategies on the development of physical culture and sport are being prepared and implemented.

By 2020, sports federations, sport clubs and sport schools of the country will be provided with specialized sports training and athletics facilities. Physical culture and sports organisations will keep on working on strengthening the logistics; the training of personnel will be further improved; social protection of experts working in the field will be enhanced.