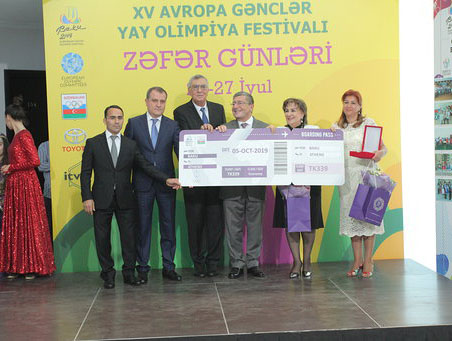 The National Olympic Committee (NOC) of the Republic of Azerbaijan celebrated winning athletes of the European Youth Olympic Games (EYOF) Baku 2019 and winning schools of the Olympic Culture Education Programme (OCEP) in an event called “Victory Days” in Baku, Azerbaijan on 29 July 2019.

Organised by the NOC Azerbaijan, “Victory Days” is an annual celebration that brings together Azerbaijani medallists, their families and friends, as well as representatives from the sports community and media.

It is an occasion for winning athletes to be awarded special gifts, as well as to attend live performances and communicate with fans.

In attendance among others were Minister of Youth and Sports Azad Rahimov, Minister of Education Jeyhun Bayramov and Vice-president of the Azerbaijan National Olympic Committee Chingiz Huseynzade.

This year, in addition to the country’s sports champions, a special tribute was paid to legacy project OCEP. In particular, the NOC of Azerbaijan, the Ministry of Education and the Ministry of Youth and Sports awarded OCEP’s team of experts, the best OCEP schools as well as the volunteers with special gifts and certificates.

The schools representing Serbia, Switzerland and Sweden were the winners of the category “Active schools” and won a special trip to the Olympic Culture and Sport Camp in one of the beautiful regions of Azerbaijan.

Whereas the schools representing Ukraine, Spain and Azerbaijan were the winners of the category “The most active schools” and won a special trip to Greece, the motherland of ancient Olympic Games and Olympism.

Last but not least, the volunteers were acknowledged their great contribution to the success of EYOF Baku 2019 as well as their active support to the running of OCEP’s pavilion in the Athletes village.