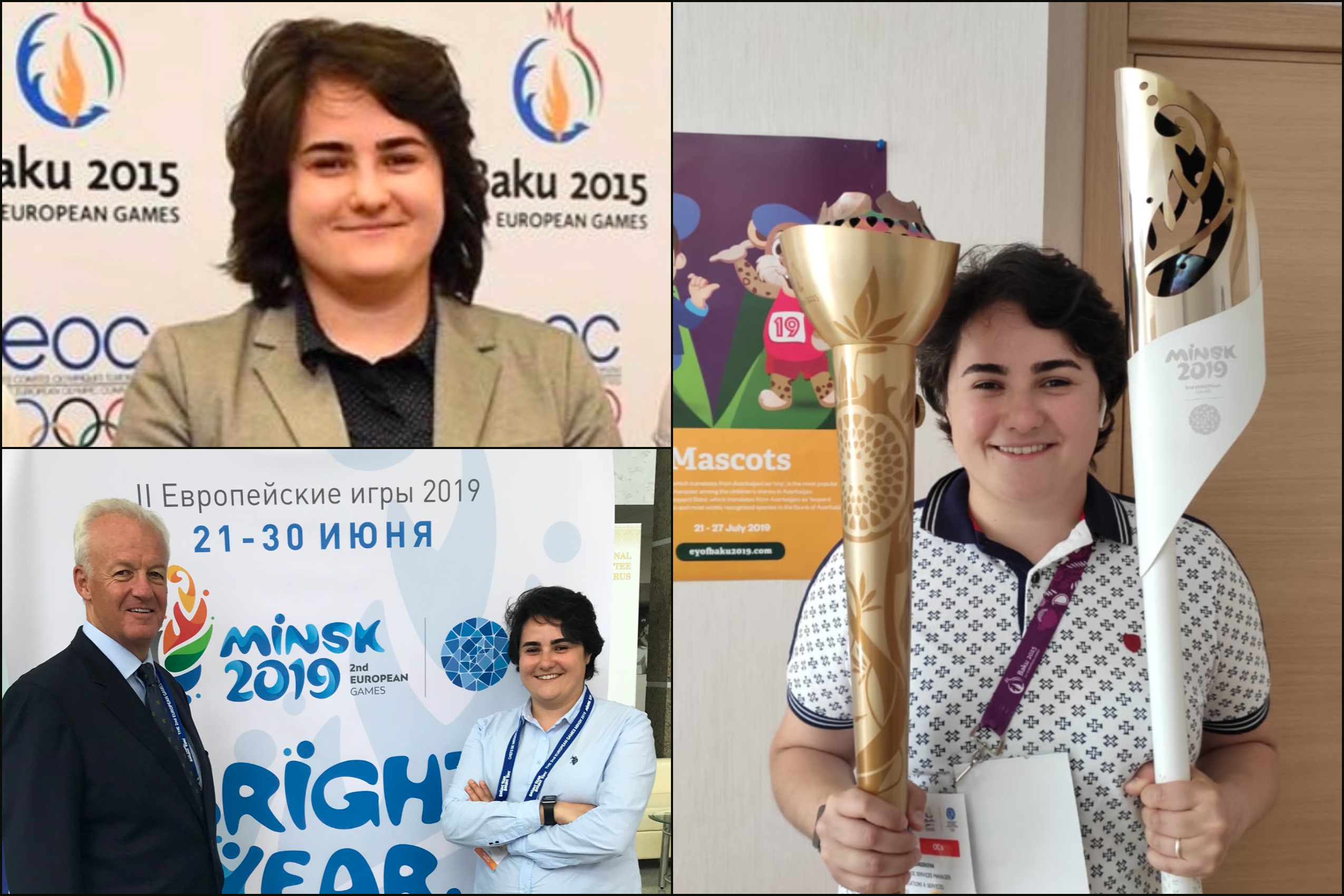 With the bulk of the European year of sport now behind us, the European Olympic Committees (EOC) would like to thank all of those who made the European Games, two editions of the European Youth Olympic Festival, and the Games of the Small States of Europe possible in 2019.

Without the many thousands of volunteers and local experts working tirelessly behind the scenes, the success of these events could not have been possible.

One worker who stood out a little more than most at EOC events this year was Sevda Jahangirova, a native of Nagorno Karabakh, Azerbaijan, who over the years has come to epitomise the term “human legacy” used to describe the expertise gained by those working to deliver major multi-sports events.

In the Olympic world, that expertise either remains within the host country or is put to use at other events around the globe. In Jahangirova’s case, both are accurate.

Jahangirova first dipped her feet into the world of sport in the lead up to the inaugural European Games in Baku in 2015. She had just finished an internship at the European Parliament and returned to Azerbaijan eager to do something that would positively contribute to society in one way or another.

“When I heard that there was going to be an incredible event called the European Games, I thought it was the opportunity that I was looking for and should definitely join this project,” she says. “I was sure that being part of this spectacular event would be a milestone and great leap for my professional life. This was not only because I enjoy dynamic work but because I also wanted to play a role in creating history with my home country hosting the best athletes of Europe as they competed in the first ever European Games.”

At Baku 2015 she performed the role of National Olympic Committee (NOC) Services specialist, gaining valuable experience from outside experts who had worked at the London 2012 Olympic Games and soaking up as much knowledge as possible. Following the success of those Games, Jahangirova felt inspired to put her newly acquired skills to use elsewhere, first at the Islamic Solidarity Games Baku 2017 and then at the 2017 Asian Indoor and Martial Arts Games in Ashgabat, Turkmenistan.

This year Jahangirova not only joined the Media and Communications department for the Formula 1 Azerbaijan Grand Prix, but she also led the NOC Services team at Minsk 2019 before taking up the role of Senior NOC Services Manager for Baku 2019. Quite an impressive run, one that she credits to the transfer of knowledge from the first European Games.

“It all started at Baku 2015, where I worked with professionals with Olympic experience who shared with us how to follow all procedures and policies, taught us how to plan and evaluate our operations, and shared a huge amount of valuable information and knowledge,” she says. “The event was a very new and different concept for us as a country. The European Games had an impact on the lives of hundreds of young people in terms of what they learned. For dozens of young people, it determined their future career path.”

Jahangirova was soon tapped to bolster the staff at the Minsk European Games Organising Committee, where she effortlessly took up the role as Head of NOC Services, receiving high praise from many NOC Chefs de Mission before, during and after the 21-30 June event.

She attributes her smooth transition from event to event to the self-development and increased confidence she has built up over the years. “I had some concerns during Baku 2015 that I might fail, but I was literally well-prepared for any situation in Minsk thanks to the knowledge and experience I gained from previous events.”

One of her biggest takeaways from half a decade inside sport is that there are many great opportunities both professionally and personally that one can take advantage of while working for events like the European Games and European Youth Olympic Festival. For Jahangirova, the top three benefits are self-realization, friendships and a true sense of the value of teamwork.

“When I lived in [Western] Europe, I frequently heard about teamwork, but Baku 2015 I can say was the first time I was required to be a team player, and later, I was leading the team myself,” she says. “If you don’t have a team that is supporting you and if you are not a team as a whole, the organisation of the event cannot be successful.”

“This is what I learned from Sophie Lorant, our colleague and head of our function at Baku 2015, who brought her experience from London 2012 and made such a big contribution to the whole team’s growth and myself in particular.”

Having given her all at back-to-back-to-back sports events this year without a moment to catch her breath, it is perhaps unsurprising to learn that Jahangirova’s main goal following the Baku 2019 EYOF was to take a well-deserved break. But having clearly caught the bug for working major international sports events, Jahangirova already has one eye on her next project.

“I hope to do the Olympics one day, so I will go forward in that direction,” she says. “I enjoy what I do and I believe the experiences that I gained so far and my professional background along with my skills will enable me to join the Olympics. I will continue in this field because I believe in sport and how powerful it is.”