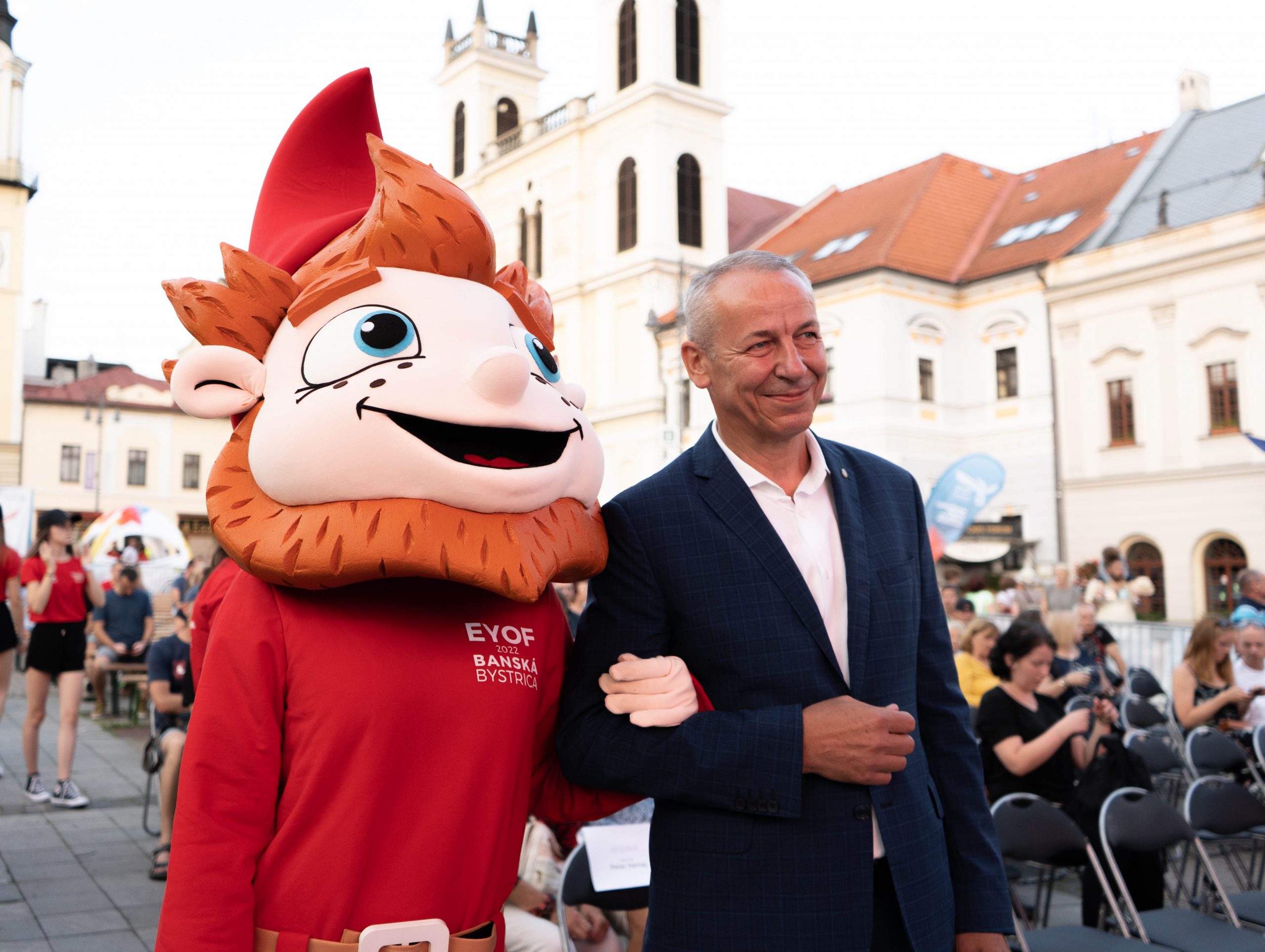 Banska Bystrica 2022 unveils mascot to mark one year to go to EYOF!

The countdown clock to the the European Youth Olympic Festival (EYOF) Banská Bystrica 2022 officially kicked off go on 24 July 2021, marking one year to go to the biggest youth multisport event in Europe.

To celebrate the milestone, the Organising Committee unveiled its mascot, a mining gnome named Permoník.

The countdown clock was placed in the Europa SC shopping centre in Banská Bystrica and will count the days over the next twelve months.

Hundreds of visitors were able to listen to concerts, try out various sports disciplines and have fun with a number of activities.

“The EYOF will be a beautiful celebration of sport in Slovakia. I am very glad that the Ministry of Defence of the Slovak Republic is also financially involved in the modernisation and reconstruction of the sports facilities, which can later serve as the field of play of future Olympians who will bring up in Banská Bystrica,” said Marian Majer, State Secretary of the Ministry of Defence.

Mayor of Banská Bystrica and President of the Organising Committee Ján Nosko recalled that the EYOF should have started on that day: “If a new coronavirus had not hit the world, instead of commemorating one year to the beginning, today we would have celebrated the beginning of the event.

“The pandemic has caused the postponement of the Tokyo Olympics and our event. We were ready to host the EYOF already this year, but the postponement has helped us to focus on the details and prepare an event with a higher emphasis on quality, safety and sustainable concept. We look forward to seeing the European Youth Olympic Family in Banská Bystrica next year.”

Several Olympians started their careers at the EYOF

Slovakia and the whole sporting world are currently experiencing the Games of the XXXII Olympiad in Tokyo. While the Olympic Games are the culmination of the efforts of all athletes, the European Youth Olympic Festival is the first big multi-sport event for young athletes, representing a springboard for their careers on their way to the Olympics. From Slovakia, current Olympians such as Emma Zapletalová, Gabriela Gajanová, Barbora Mokošová and Barbora Balážová have competed in the EYOF.

Permoniks, the mining gnome, as mascot

The town of Banská Bystrica and the surrounding region are linked to the tales of “permoniks” namely the mining gnomes.

According to legends, the Permoniks were the ancient guardians and protectors of minerals and treasures in the vicinity of the mining tunnels. They guarded and dug ore with precious minerals, while helping miners in their work and warning them of any dangers.

The mascot was selected by a jury composed of experts in fine arts and Olympism. The winning design was produced by Milan Prekop from Bratislava and chosen out of 1,102 entries.

“We were delighted and pleasantly surprised by the public interest in the art competition. The jury did not have an easy task, but we are convinced that they have chosen a unique mascot. Its face and appearance are easy to remember and will please every visitor to the EYOF. The Permonik will gradually appear at other events associated with the EYOF and the city of Banská Bystrica,” said Peter Hamaj, Executive Director of the EYOF 2022 Banská Bystrica Organising Committee.

The Organising Committee continues to look for volunteers who contribute to the success of the EYOF 2022 Banská Bystrica.

Further information is available on the official website www.eyof2022.com