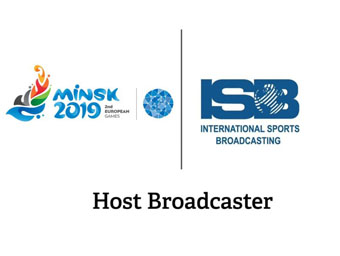 The second edition of the European Games is less than 150 days away, and for sports fans unable to travel to Minsk, Belarus to take in the action in person, there will be more than 120 countries around the world where you can watch from the comfort of your own home.

International Sports Broadcasting (ISB), the host broadcaster for the Games, says it has already reached agreements in more than 106 territories, many of which are top broadcasters in Europe. Other deals in place will bring the European Games into households as far away as sub-Saharan Africa and New Zealand, with a total estimated reach of more than 500 million potential viewers.

“This is excellent news not only for the success and longevity of the European Games, but especially for the athletes, who deserve to have the biggest possible viewership while competing at Europe’s premier multi-sport event,” said European Olympic Committees (EOC) President Janez Kocijančič. “We look forward to welcoming the world to Minsk this summer, be it in person or via our strong network of broadcasters.”

ISB will produce an estimated 500 hours of broadcast coverage of Minsk 2019, which will run from 21-30 June in the Belarusian capital. During the 10 days of European Games competition, ISB will provide extensive live coverage of events as well as a daily highlights package. The company will also cover the Opening and Closing Ceremonies.

ISB is recognised worldwide for its excellence and innovation in sports broadcasting. Founded in 1996 by Manolo Romero, ISB has served as the host broadcaster for many of the world’s leading sporting events, including seven Olympic Games, six Paralympic Games, numerous World Championships and World Cups, and continental events such as the Pan American Games.

“We are very pleased with the agreements reached so far and expect to announce a number of other key deals soon,” Romero said. “Our ultimate target is more than 120 rights holding broadcasters and we are confident that we will achieve it.”

Over 4,000 of Europe’s best athletes will compete in 15 sports at the European Games: 3×3 basketball, archery, athletics, badminton, beach soccer, boxing, canoe sprint, cycling, gymnastics, judo, karate, sambo, shooting, table tennis and wrestling. Nine of the 15 sports will act as qualifiers for the Olympic Games Tokyo 2020, with the European Games also counting as the official European championships for four sports.

There will be 91 men’s events, 89 women’s events and 21 mixed events in total, with 115 universality spots available.