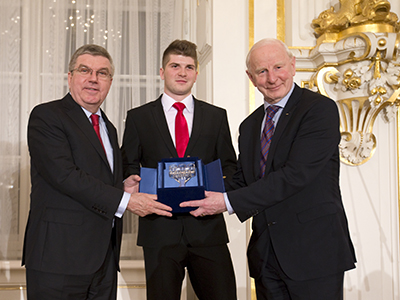 Janošek was one of five finalists, all of whom were shortlisted by the National Olympic Committees of Europe, not just for their athletic performances but also for their sense of fair play.

The awards ceremony took place during a Gala Dinner after the first day of the 44th EOC General Assembly. The dinner was held in the Baroque Spanish Room at Prague Castle, the seat of the head of state of the Czech Republic.

Janošek, who takes home a €12,000 training grant, has been a member of the Aso Dukla Brno cycling team since 2011. In 2014, he won the 1km time-trial (TT) at the Junior European and World Championships – and retained his World Championship title this year.

He is also a multiple Czech junior champion (in the sprint, keirin, and omnium) and a Junior Czech record holder
(in 1km TT, team sprint, and 200m TT)

His ambitions for the future are focused on the 2020 Olympic Games in Tokyo – where he is hoping for a medal in the sprint or keirin.

The 50 NOCs attending the EOC General Assembly had elected Janošek as the winner earlier in the day.

After Janošek, the following young European athletes were also recognised for their elite performances in 2015, and for their exhibition of fair play:

Accepting awards on behalf of these athletes were: