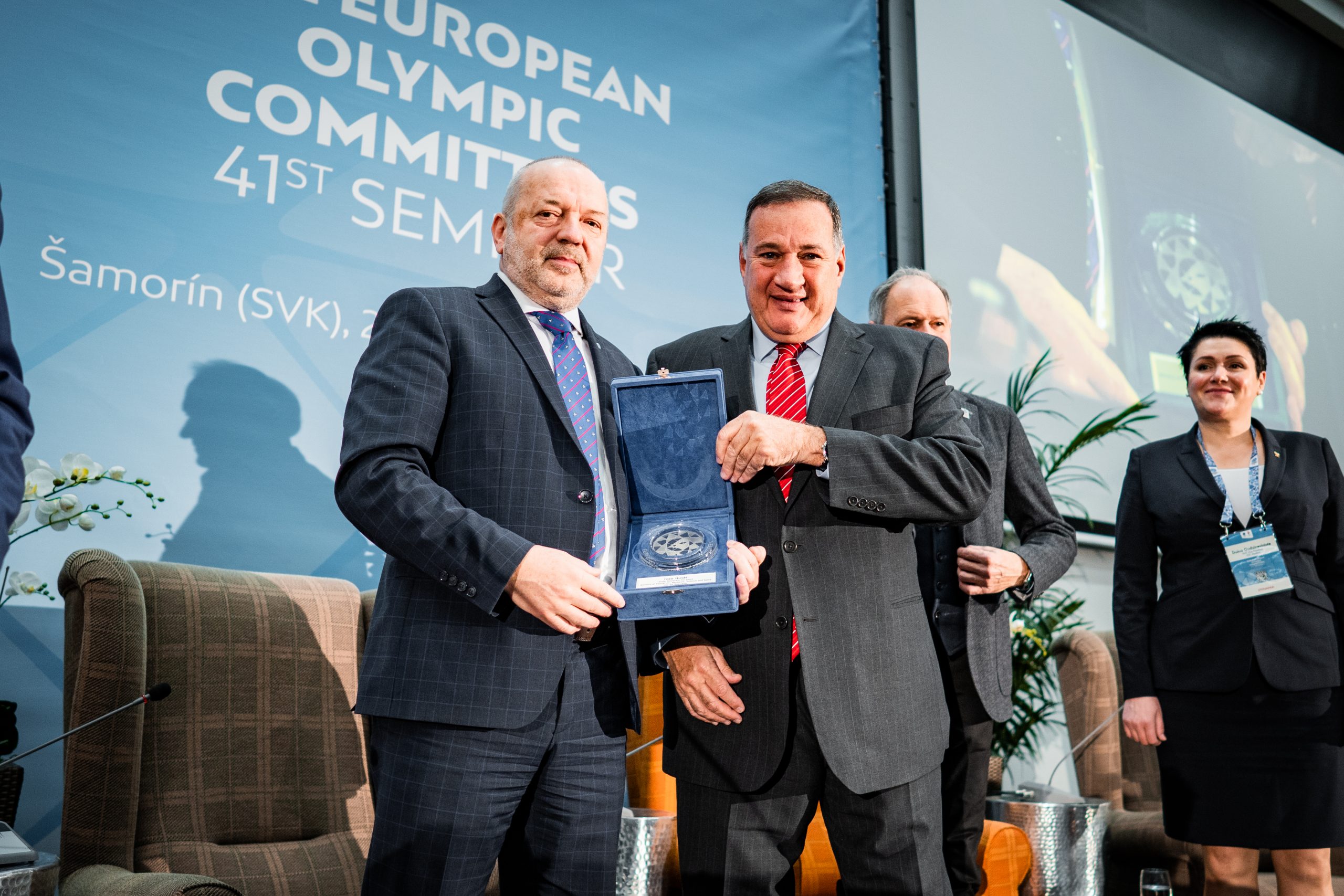 Day 1 of 41st EOC Seminar comes to close in Samorin

The first day of the 41st European Olympic Committees (EOC) Seminar has wrapped up at the X-Bionic Hotel in Samorin, Slovakia.

“Allow me to begin by extending my deep gratitude to our hosts, the Slovak Olympic and Sports Committee, for hosting this important event under these exceptional circumstances,” said President Capralos, referring to the fact that the country had issued new lockdown measures to curb the spread of COVID-19 a day earlier.

With delegates from 44 of the 50 European National Olympic Committees attending in person, and those from the three others following along online, EOC General Secretary Raffaele Pagnozzi introduced the latest updates to the format for the Seminar, all designed to facilitate more dialogue and information-sharing.

A Web App was developed by the EOC so that anyone could ask questions electronically. All questions were sent directly to the Master of Ceremonies, four-time Olympian Danka Bartekova, who could then pose the questions seamlessly to the speakers.

Olympic Solidarity Deputy Director Pamela Vipond began the presentations with an overview on the support provided to the world’s National Olympic Committees (NOCs) for the Olympic Games Tokyo 2020. In total, 310 European athletes received scholarships, with 70 of those going on to win medals at Tokyo 2020 and 101 earning diplomas.

The day was split into two main themes: “After Tokyo 2020” and “Best Path to the Future.” Secretary General of the Association of National Olympic Committees (ANOC) Gunilla Lindberg and Toshio Tsurunaga, IOC Head Of NOC Games Services And NOCs Relations, kicked things off with a comprehensive debrief of Tokyo 2020, with a particular focus on the measures taken to overcome the challenges of COVID-19.

While admitting to a number of issues experienced at the postponed Games, Tsurunaga concluded by saying, “Generally I think the Games were very, very successful, especially under the conditions we operated.” He added that the lessons learnt at Tokyo 2020 are already being applied to preparations for the upcoming Olympic Winter Games Beijing 2022.

The focus then switched to the tremendous performances of European athletes at Tokyo 2020. EOC Sports Director Peter Brüll gave a general overview, noting that athletes from 40 of the 50 European NOCs won medals, accounting for almost half (48.43 percent) of the entire medal haul.

Deeper dives into what made their teams so successful in Tokyo were provided by Professor Antonio La Torre, Technical Director at the Italian Athletics Federation (FIDAL); Gwladys Epangue, Member of the Athletes’ Commissions of the EOC, French NOC and Paris 2024; Eros Bologna, Secretary General of the San Marino NOC; and Besim Aliti, Secretary General of the Kosovo Olympic Committee.

Sustainability in sport has become a pressing issue for all Olympic Movement stakeholders, and a compelling session on all the terrific initiatives Paris 2024 has been implementing was conducted by IOC Olympic Movement Sustainability Senior Manager Julie Duffus and Berit Kjøll, President of the NOC of Norway and EOC Executive Committee Member.

Following an update from the IOC on preparations for Beijing 2022, the Seminar moved into Session 2: Best Path to the Future, which focused on the prevention of manipulation of sport competitions, the EOC Strategic Agenda 2030, and European Union projects that support NOCs and EOC sports events.

A great deal of useful information on how to educate and protect athletes from unfair practices in sport such as doping and betting activities was presented by an expert panel that included Evangelos Alexandrakis, the IOC’s NOC Contact Manager in the Olympic Movement Unit on the Prevention of the Manipulation of Competitions; and EOC Ethics Commission Members Maja Smrdu, Martine Spreitzer-Kropiunik and Juha Viertola.

The participants were then split into groups of four to discuss in greater detail four of the eight strategic priorities identified by the Strategic Agenda 2030 Working Group headed by Chair Djordje Visacki. The four breakaway workshops tackled EOC Sport Events, NOCs of Europe, EOC Management and Good Governance and Transparency.

Each group was asked a series of questions related to their topic, which they answered anonymously through an online app while a panel of experts debated the points. The results will be collated and presented back to the full Seminar by Chairman Visacki on Day 2.

The final discussion of the day was led by Director of the EOC’s EU Office Folker Hellmund and EU Funding Officer Carlotta Giussani. The two provided useful information on what EU Funding Programmes are available (such as Erasmus+), which countries are eligible, and how to go about applying for them. The NOCs of Europe were all encouraged to increase engagement with the EU with regard to such funding.

On the agenda for Day 2 of the Seminar are the 14th European Laurels Awards, Athletes’ Commissions Best Practices, and sessions on Marketing & Communication and EOC Sports Events. An EOC Executive Committee meeting is also scheduled to take place first thing in the morning.