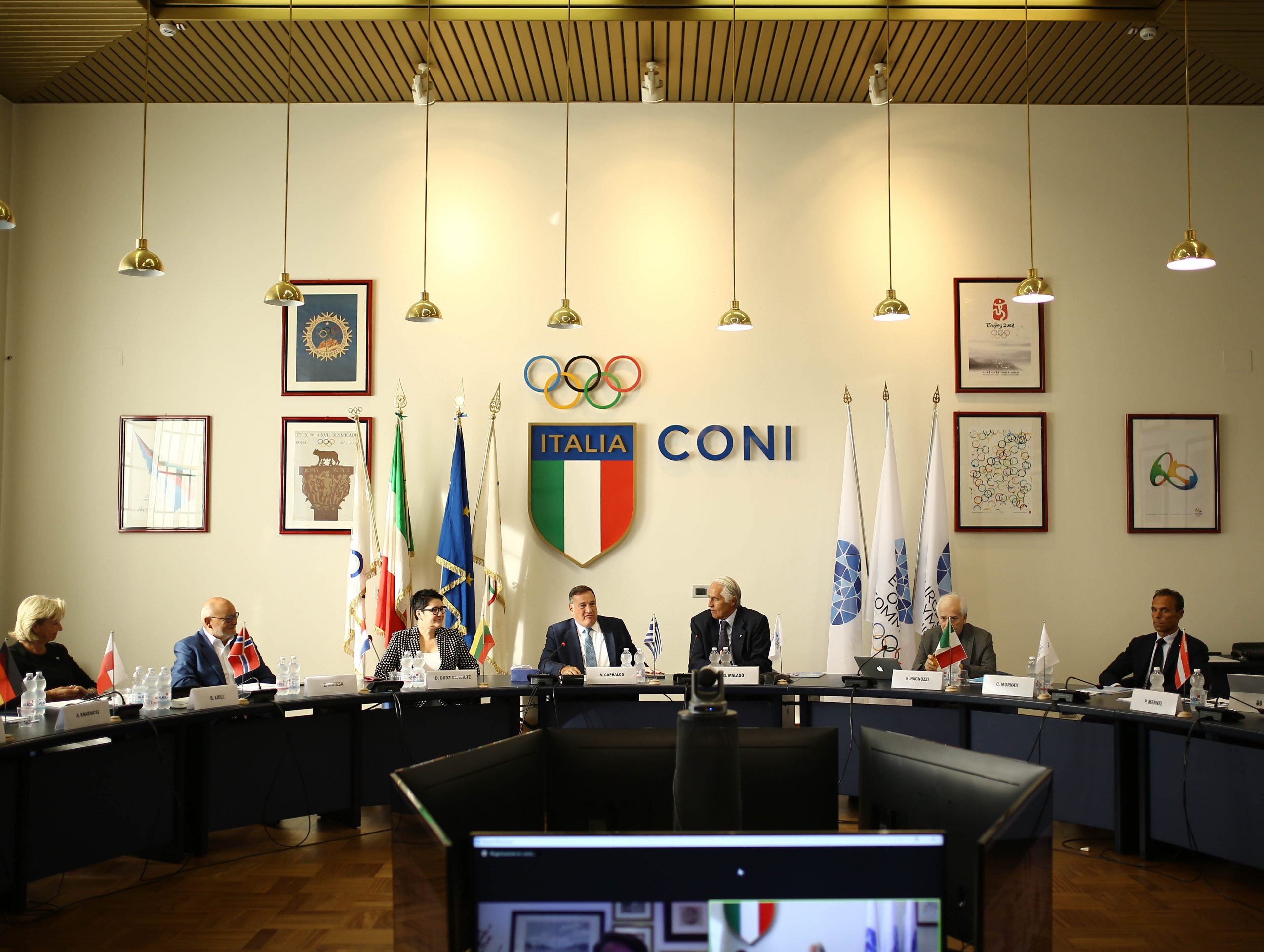 The 2nd Executive Committee meeting of the 2021-2025 period took place today at the headquarters of the Italian Olympic Committee (CONI) in Rome.

It was the first full meeting since the new Executive Committee was elected in June, and was led by President of the European Olympic Committees (EOC) Spyros Capralos.

Opening the meeting, President Capralos reminded members of the important duty the Executive Committee has as leaders of the Olympic Movement in Europe. “We are a new team, and we need to learn together to be effective and efficient to continue the work of the EOC for the interest of sport on our continent,” he said.

“I am very proud of all of the work our NOCs do. During the next four-year period we need to continue our support of the activities and to move to the next phase and implementation of Strategic Agenda 2030. It is clear if we look at the Olympic Games in Tokyo and the success of our European athletes, the direction that we are taking as an organisation, and specifically with the European Games, is starting to have a positive effect.”

The meeting featured updates on the European Games Krakow-Malopolska 2023, the upcoming 2021 EOC Athletes’ Assembly and EOC Seminar, future support for the Games of the Small States of Europe (GSSE), the role of EOC Commissions, as well as the next phase of Strategic Agenda 2030.

Chairman of the Coordination Commission for the 2023 European Games Hasan Arat delivered a detailed report on the preparations for the event and highlighted the support coming from ATOS and EBU. With 23 sports already included in the programme, it was confirmed that all of the Olympic sports will provide qualification opportunities for the following year’s Olympic Games Paris 2024.

In addition to the report on the activities of the EOC Head Office in Rome, EOC Secretary General Raffaele Pagnozzi introduced the ExCo to the full programme for the upcoming 41st EOC Seminar in Samorin, Slovakia, scheduled to take place over two days from 25-26 November.

The format will focus on more interactive sessions in a relaxed format. On the provisional agenda are sessions on Sport in a Digital Age, EOC Sports Events, Strategic Agenda 2030, how NOCs can access EU Funding, and the benefits of sustainable sport. The 10th Piotr Nurowski Best European Young Athlete Prize (Summer Edition) will also be awarded at the Seminar.

While discussing the future of the EOC Commissions and Working Groups, the ExCo received a proposal for an overhaul to ensure that these groups continue to be fit for purpose. The initial plan includes the creation of three working groups covering Strategic Agenda 2030, the hosting strategy for the European Games 2027 and a group to explore the possibility of a Winter European Games. The proposals for Working Groups and Commissions will be presented at the next ExCo meeting after a period of consultation.

Following the findings of the report from phase one of Strategic Agenda 2030, which was presented to the General Assembly in June, the mandate was given to the new Executive Committee and a Working Group led by Djordje Visacki to work on the next phase of the project. Updates on the progress and road map will be given to the NOCs during the Seminar.

The 6th Assembly of the European Athletes will take place in Dubrovnik, Croatia on 2 October, and EOC Athletes’ Commission Chair Gerd Kanter provided a brief summary of the activities and challenges that the Commission has tackled over the last four years. He went on to introduce the agenda for the gathering, which will see the election of the 2021-2025 European Athletes’ Commission, and encouraged more active involvement of the new Commission. The list of candidates and other information can be found here.

EOC Treasurer Peter Mennel presented the revised EOC budget, the appointment of an Audit Committee for the 2021-2025 period, and the allocation of the 2017-2020 Olympic Solidarity subsidy surplus.

Members received a statistical overview of the European results from the Olympic Games Tokyo 2020. The results highlighted how strong Europe performed once again at the Olympic Games. Praise was given to the International Olympic Committee (IOC) and the Japanese organisers for staging a great event under such challenging conditions.

Finally, members received updates on the European Youth Olympic Festivals (EYOFs), European Union matters, including a proposal for signing a joint Agreement between the EOC and EU Commission for closer collaboration, and the latest ANOC developments.

The next EOC ExCo meeting is scheduled for 24 November in Samorin, Slovakia on the eve of the 41st EOC Seminar.