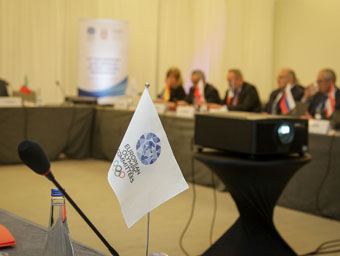 The Executive Committee of the European Olympic Committees (EOC) will convene, tomorrow 20 September in Stockholm, Sweden for its third meeting of 2018.

The agenda for the one-day meeting includes discussions on a variety of matters related to the European Games. EOC Coordination Commission Chair for the European Games Minsk 2019 Spyros Capralos will report on the progress being made for the 2nd edition of the Games scheduled for next 21-30 June. The bid process for the 3rd edition of the Games in 2023 is also expected to be tabled for approval by the Executive Committee.

“With the European Games, both editions of the European Youth Olympic Festivals, and the Games of the Small States of Europe all taking place in 2019, we have a full schedule of important topics to discuss in Stockholm,” said EOC President Janez Kocijančič, who will oversee the working session, hosted by the National Olympic Committee of Sweden. “We will work diligently and efficiently to ensure the success of all our properties, while providing full support to the 50 European National Olympic Committees as their athletes prepare for competitions, including the upcoming Youth Olympic Games, around the world.”

Also on the schedule are reports from the EOC’s Commissions and Working Groups, European Union Matters, and preparations for the Summer and Winter editions of the European Youth Olympic Festivals in Baku and Sarajevo & East Sarajevo next year, the Youth Olympic Games in Buenos Aires in October, and the XXIII ANOC General Assembly set for 26-29 November in Tokyo.

The Executive Committee is also set to discuss the programme of the 47th EOC General Assembly in Marbella, Spain from 9-10 November. This includes the Order of Merit, Laurels and candidates for the Piotr Nurowski Prize.

The fourth and final EOC Executive Committee meeting of 2018 will take place on 8 November in Marbella ahead of the General Assembly.