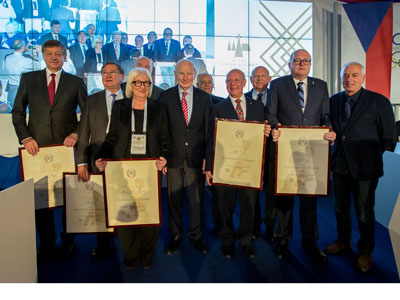 Rome, November 24, 2015 – the recent 44th EOC General Assembly was the perfect place where, like every year since 2007, to award the European Olympic Laurels to NOC sports leaders who have distinguished themselves for their merits and their commitment to sport.

And indeed in Prague the EOC awarded its 9th European Laurels to five NOC’s sport leaders: Mrs Morana Palikovic Gruden (CRO), Mr Alain Geles (FRA), Mr Joseph Cassar, (MLT), Mr Ioan Dobrescu (ROU) and Mr Igor Kazikov (RUS). Sport leaders who, day after day, have put their efforts and expertise at the service of sport, within their NOC or in their country in general.

Each year, the NOCs’ candidatures flock to the EOC headquarters. The task is less than easy for the Executive Committee called to choose the small group of recipients, taking into account a fair balance among regions.

This year’s 5 laurels resumes:
-Mrs Morana Palikovic Gruden (Croatia)
President of the Croatian Skating Federation and member of the Croatian Olympic Committee Council, chair of its Women in Sport Commission, European Fair Play Movement Delegate. After a career as a journalist, she built a political career within the City of Zagreb, as deputy mayor of the City, Member of Parliament and Chair of the Parliamentary Club of Deputies. She is currently Vice-President of the Croatian Popular Party and Representative in the Assembly of the City of Zagreb.

-Mr Alain Geles (France)
Gelès built a career within the French NOC until 2002 – as Director of International Relations, CNOSF President’s Chief of Staff, and Director General of the Organising Committee for the 1994 Olympic Congress Centennial.
He has served national and international sport with dedication and passion throughout his professional career and as a volunteer official.
A former Rugby France University champion, he was Director of the South Pacific Games in Noumea, and National Technical Director of the French Federation of Volleyball.
Within the Association of European NOCs, from 1997 to 2001 Gelès was an active member of its Executive Committee and Chair of its Juridical Commission.

-Mr Joseph Cassar (Malta)
Cassar has served on the MOC Council since 1990, and as Secretary General of the Maltese Olympic Committee since 1993.
Since the seventies – besides practicing several sports at competition level, including Cross Country Running, Athletics, Underwater Activities, Basketball, Volleyball, Football, Badminton and Table Tennis – Cassar has held important administrative posts in numerous sports bodies and managed a number of international sporting events in Malta, including: Secretary General of the Malta Sub Aqua Club, founder of the Federation of Underwater Activities, of which he became Secretary General and later President, President of the University Sports Committee, Treasurer of the Malta Amateur Weightlifting Association, and Director of the Malta Sports Council.
He was entrusted the chair of a number of ministerial and other national sports committees in Malta, and he also served on the Sports Committee of the Commonwealth Games Federation.
At European level he was an Executive Member of the European Sports Committee.
Within the EOC, he has sat on the EYOF Coordination Commission for six consecutive EYOFs.
He was the Administrative Secretary for the 1993 Malta Games of the Small States of Europe, and again Secretary General of the Executive Committee for the 2003 Malta GSSE.

-Mr Ioan Dobrescu (Romania )
One of the strongest pillars of the European and international sports environment, Dobrescu is one of the longest serving Secretaries General for the NOC of Romania, and has dedicated his life to the service of sport. He will step down as Secretary General after Rio 2016).
A 1st National Division and National Team Junior basketball player, he then became basketball coach for 1st Division juniors and Head Coach of the National Juniors Team, and is currently President of the Romanian Basketball Federation.
At governmental level, he was State Secretary for Sport in the Ministry of Youth and Sport.
He was among the founders of the Romanian Sports Law society in 2000 and a contributor to its application rules, including the first legal creation of public awards for athletes with good results at the Olympic Games, as well as founder of Life Rent, for athletes who have won medals for Romania at the Olympic Games, European and World Championships.
His is an outstanding career in the service of sports and the European Olympic Movement, and in keeping Romania among the elite of the global Olympic nations.

-Mr Igor Kazikov (Russia)
A distinguished leader in the Russian Olympic movement, Kazikov devoted more than 40 years of his life to working in Russian physical culture and sport institutions.
In 1994, he started his career in the Russian Olympic Committee, where he held various positions, up to First Vice-President, then as Presidential Advisor.
He has participated as Deputy Chef de Mission of the Russian national team at 5 Olympics Games from Atlanta to London, and 4 Winter Olympics from Nagano to Vancouver.
His managerial talent became most evident in the preparation period and during the XXII Olympic Winter Games in Sochi.
He is also the First Vice-President of the Russian Triathlon Federation and member of the Council and Executive Board of the Russian Ice Hockey Federation.
Today Kazikov serves as the Head of the ROC Directorate for Participation in Olympic Sporting Events, which is responsible for the preparation and management of Russian athletes’ participation in the events held under the auspices of the IOC and EOC.
Kazikov is engaged in scientific research. He has written 60 scholarly works on improving and strengthening coaching in the run-up to multi-sport events.