EOC MOURNS PASSING OF JACQUES ROGGE, THE PRESIDENT WHO GAVE AN UNFORGETTABLE IMPETUS TO THE ASSOCIATION

It is with profound sadness that the European Olympic Committees (EOC) has learnt of the passing of former EOC and IOC President Jacques Rogge at the age of 79.

Count Rogge had a brilliant career as an athlete, initially in rugby and then in sailing, while continuing his activity as an orthopaedic surgeon with a degree in sports medicine.

While the Members of the Association gradually expanded due to the geopolitical changes of the time reaching 50 Members, Jacques Rogge brought a new impetus to the organisation. President Rogge launched the European Youth Olympic Festival (EYOF) in 1991 – a multisport event for Europe’s brightest young talents that is still going strong today.

Under his leadership, the scope of the work done by the Association saw a considerable upturn. The activities of the Association increased and benefitted the NOCs of Europe in many ways – through both direct and indirect assistance in preparation for the Olympic Games and the reinforcement of their role at national level.

Rogge brought the relationships with various sports organizations and in particular the European Union to another level.

In 2001 he left the EOC and was elected President at the IOC, where he continued his action in favour of young people, particularly by giving birth to the Youth Olympic Games.

In addition to his acknowledgement of IOC Honorary President, Rogge was also appointed Special Envoy for Youth Refugees and Sport by United Nations Secretary-General Ban Ki-moon, to help promote sport as an empowerment tool for youth from displaced and refugee communities towards peace, reconciliation, security, health, education, gender equality, and a more inclusive society.

All those who were lucky enough to know him will remember Jacques Rogge as a noble man, an innovative leader and sports enthusiast.

The EOC sends its sincerest condolences to his wife Anne, his children and grandchildren.

As a mark of respect, following the invitation from the IOC, the EOC flag will be flown at half-mast for five days at the EOC headquarters in Rome. 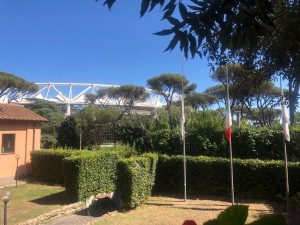