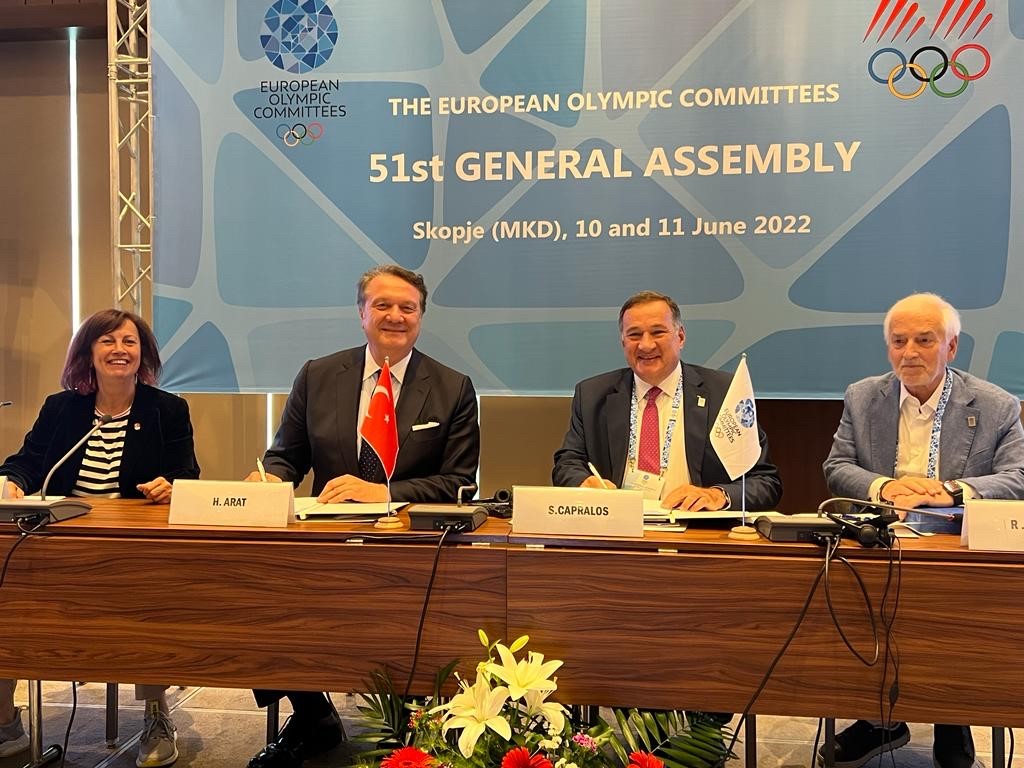 The 51st EOC General Assembly concluded in Skopje, North Macedonia today after two days of productive discussions. The second day concluded with EOC President Spyros Capralos calling for the European sports family to be a unifying force, following reports on the European Youth Olympic Festivals (EYOFs), the EOC Strategic Agenda 2030, and the promotion of the European Sport Model.

In his closing remarks, EOC President Spyros Capralos said, “We have covered a range of topics, setting a clear route forward for the EOC. And as we continue to work towards key milestones, such as the European Games and Paris 2024, I hope you feel energised by what we have learnt here in Skopje.

“We must carry forward what we have discussed here and continue to promote the use of sport as a vehicle for peace and non-discrimination. Even when the world is divided, sport can unite. The EOC will continue to be guided by the Olympic principles and values, and we are looking forward to the return of all athletes to the field of play once the circumstances allow, which is unfortunately not yet the case as stressed in Skopje by IOC President Thomas Bach.”

EOC Strategic Agenda 2030 Working Group Chair and EOC Executive Committee (ExCo) Member Djordje Visacki shared an update to NOCs on the progress made since the contributions NOCs made at the EOC Seminar at the end of last year. The Working Group will continue to seek input from NOCs and feed it into the creation of a 2023-26 Action Plan, which will be developed in collaboration with the EOC ExCo.

The General Assembly also received a report from EOC EU Office Director Folker Hellmund, which reiterated the importance of protecting and enhancing the European Sport Model. In alignment with the IOC, the EOC General Assembly agreed this model ensures sport continues to be run in the interests of the many in Europe.

Reports were also provided by the Games of the Small States of Europe, which will take place in Malta next year, as well as the Mediterranean Games Oran 2022 organising committee and the World Anti-Doping Agency.

Last night (10 June), NOCs attended a Gala Dinner organised by the Olympic Committee of North Macedonia. Celebrating the NOCs 30th anniversary, delegates enjoyed an evening of both opera and traditional music at the National Opera and Ballet. Former NOC President Vasil Tupurkovski was presented with a commemorative gift by EOC President Spyros Capralos to mark the occasion.

During the Gala Dinner, Slovenian ski jumper Nika Prevc was announced as the winner of the 7th Winter Edition of the Piotr Nurowski Prize for the Best European Young Athlete, following a vote amongst NOCs during the first day of the General Assembly.

The 52nd EOC General Assembly will be held in Istanbul, Turkey, in October 2023. Meanwhile the 43rd EOC Seminar will take place in Olympia, Greece from 30 September – 1 October 2022.