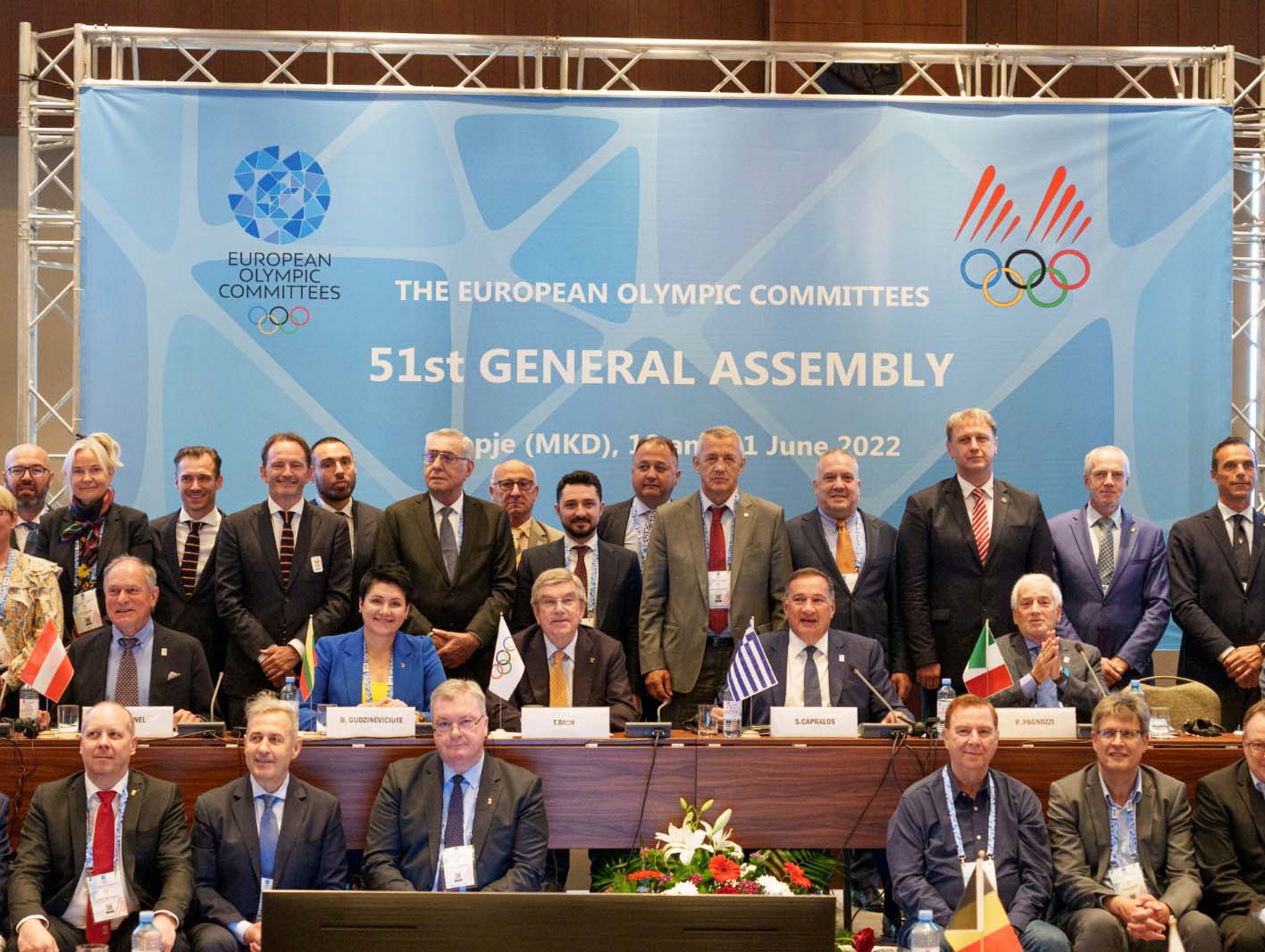 The first day of the 51st EOC General Assembly (10-11 June) in Skopje, North Macedonia covered a wide-range of topics as the National Olympic Committees (NOCs) of Europe reflected on a year of significant progress and discussed the organisation’s path forward as the world continues to move towards a post-pandemic world.

Mr Spyros Capralos opened the General Assembly for the first time as EOC President, following his election exactly one year ago. President Capralos shared his gratitude to NOCs for their role in supporting the Ukrainian Olympic Community, and outlined that the NOCs of Russia and Belarus would not attend as a one-off decision in the current exceptional context to protect the proper functioning of the General Assembly.

EOC President Spyros Capralos said, “It is a special honour to be here in Skopje and to address the EOC General Assembly as President of the EOC for the first time. This was a year with a lot of activities. There have been difficult moments, but plenty to celebrate and be proud of. I strongly believe that we are on the right path to achieve the goals we have set ourselves. We continue to pray for peace and hope to see the return of all athletes to the field of play – where the message of peace and unity is at its most powerful. Thank you very much to the NOC of North Macedonia for its warm hospitality, and thank you to all NOCs for outstanding contributions today and every day.”

President Capralos expressed the EOC’s commitment to the Olympic principles and values, and urged NOCs to continue to focus on using sport as a vehicle for peace and non-discrimination. Following the opening speech of the EOC President, International Olympic Committee Dr Thomas Bach, and IOC Member and National Olympic Committee of Ukraine President Mr Sergii Bubka addressed the General Assembly, both promoting the integral role sport plays for peace and unity around the world.

The EOC General Assembly then heard a series of key reports on work over the past year, with President Capralos and Secretary General Mr Raffaele Pagnozzi outlining how significant progress had been made in areas such as governance, communication, finances, commission activity, event organisation, and relations with the EU and other external stakeholders.

Day 1 of the General Assembly also featured reports from the Organising Committees of the Olympic Games Beijing 2022, Paris 2024, and Milano-Cortina 2026. Meanwhile a report was delivered by EOC Executive Committee (ExCo) member and European Games 2023 Coordination Commission Chair Mr Hasan Arat, following the major milestone reached last month with the signing of the Host City and Region Contract in Poland.

“We are making excellent progress with our partners in Poland, particularly after the major milestone of signing the Host City and Region Contract,” said Arat. “Poland has a long history of success in sport and I believe the European Games will help inspire the future generation of athletes to continue this legacy. There is still work to do but we are taking steps in the right direction every day. I would like commend the Polish NOC and Organising Committee for their efforts.”

Further reports were delivered by IOC Director of Olympic Solidarity and NOC Relations Mr James Macleod and EOC Executive Committee (ExCo) member and ANOC Secretary General Ms Gunilla Lindberg. During her report in her capacity as ANOC Secretary General, Ms Lindberg noted how the 2023 ANOC World Beach Games and ANOC General Assembly will be held in Bali, Indonesia. Earlier in the day, Ms Lindberg was presented with the EOC Order of Merit, the organisation’s highest recognition.

The Chairs of each EOC Commission provided comprehensive updates on the activity of their Commission over the past year, which has been guided by the strategic direction set out by the Executive Board in line with the development of the EOC Strategic Agenda 2030. The newly-established Digital and Technology, Sustainability and Active Society, and Gender Equality, Inclusion, and Diversity Commissions addressed the General Assembly for the first time.

Elsewhere, EOC Athletes’ Commission Chair Mr Gerd Kanter introduced the five finalists for the 2022 Winter Piotr Nurowski “Best European Young Athlete” Prize. NOCs then cast their votes and the results will be announced at tonight’s Gala Dinner in Skopje, which is being held at the National Opera and Ballet on the occasion of the 30th anniversary of the Olympic Committee North Macedonia.