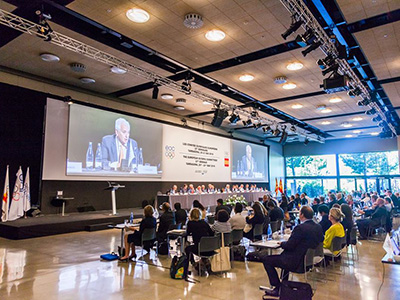 Tarragona, 21 May 2016. The 37th European Olympic Committees (EOC) Seminar finished today in Tarragona, Spain, with important technical conclusions having been reached over the course of the past two days in many different fields relating to the administration of sport in Europe.

Delegates were also able to participate in two workshops focused on Rio 2016 and on European Union policies and projects.

Prior to the Seminar, the EOC had convened an Executive Committee meeting on Thursday which was followed by a lunch attended by King Felipe VI of Spain.

“It has been a very productive two days in Tarragona for the European Olympic Movement. One of the themes which has strongly emerged from this seminar is the importance of holding our National Olympic Committees and our sports to the highest code of ethics and that working in unity is vital to achieving this. Of course, a major part of this is fighting to protect clean athletes and we fully support the efforts taken by the IOC to protect the clean athletes and to step up the fight against drug cheats.

“I would like to thank our hosts at the Spanish Olympic Committee for their superb organisation of this seminar, particularly President Alejandro Blanco and Secretary General Victor Sánchez Naranjo. But also the many members of staff and volunteers involved in this year’s Seminar. It has been a great success and I am sure Tarragona will host to an outstanding Mediterranean Games next year.”

The 37th EOC Seminar also saw the awards ceremony take place for the first ever Piotr Nurowski prize for the best young European athlete in winter sports. From five nominees, 16-year-old Ukrainian biathlete, Krystyna Dmytrenko, was voted as the winner.

“The past two days will prove invaluable for European NOCs over the next 12 months. We have seen some first-class presentations here and the updates given by the Organising Committees from Rio 2016 and Pyeongchang 2018 were very informative for our NOCs. We are extremely grateful to everyone for their presentations and to all the delegates for their active participation.”

The 38th EOC Seminar in 2017 will be hosted in Skopje, the capital of the Republic of Macedonia, after a vote by delegates.