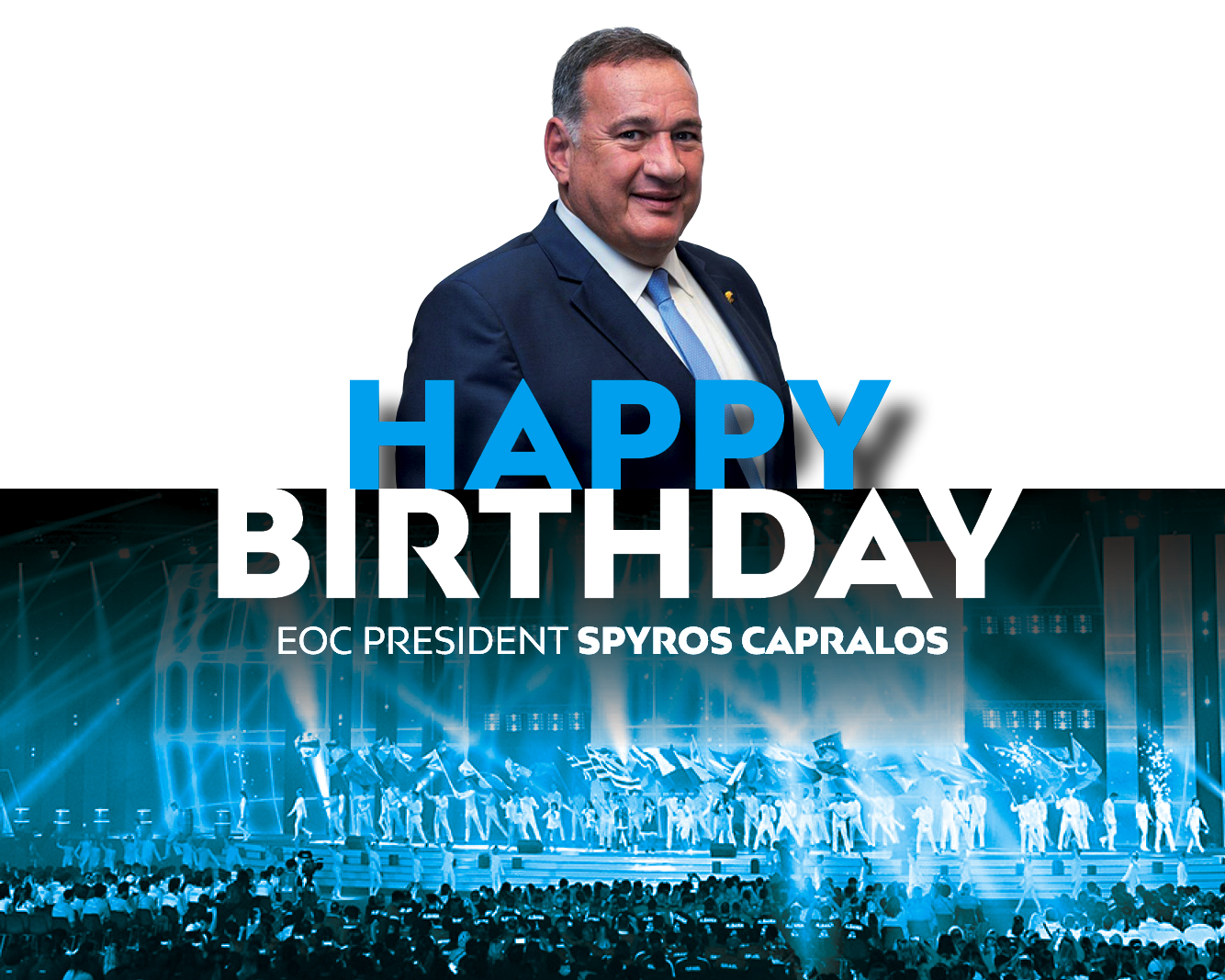 On behalf of the European Olympic family, the EOC wishes President Spyros Capralos a very happy birthday! President Capralos turns 67 today and is celebrating his first birthday since being elected as EOC President in June 2021. To mark this special day, the EOC looks back at the illustrious career of its President so far.

Born in Athens, the host of the modern Olympic Games, it is fitting that so much of Mr Capralos’ life has been dedicated to the Olympic Movement. Indeed, sport was central to his life from a very early age and he quickly showed promise as an athlete.

Talented in many sports, it was aquatics that ultimately stole his heart. He was a national champion swimmer for many years, before pursuing a career as a water polo player. In 1980, Mr Capralos made his Olympic debut in Moscow, and four years later became a two-time Olympian in Los Angeles.

During his stellar career in the water, Mr Capralos studied economics at the University of Athens, graduating in 1978. A year later, he undertook an MBA at the prestigious INSEAD in France, giving him the foundation to excel in the business world after retiring as an athlete.

From the 1980s onwards, Mr Capralos quickly advanced in the banking world, working in Athens, Paris, London, Milan and New York. He worked for the National Bank of Greece as Executive Vice Chairman, the Federation of European Securities Exchanges as President, and President and CEO of world-leading shipping company Starbulk Carriers Corp. In addition to his numerous sporting roles, Mr Capralos remains as Chairman of Starbulk, a position he has held since 2014.

His equally impressive sporting and business credentials have made him the perfect fit for sports administration, a career which began in 1991 when he took up the post of Greek Swimming Federation Vice-President. Just over a decade later, and with wide-ranging experience under his belt, Mr Capralos was appointed as Executive Director of the Organising Committee for the Olympic Games Athens 2004. It was in this role that he truly showed the world his unique ability as an Olympic leader.

Five years later, Mr Capralos was elected as President of the Hellenic Olympic Committee, a post he remains in to this day. In the same year, he was warmly welcomed to the EOC family as a member of the Executive Committee. Since then, his contribution to the European Olympic Movement has been nothing short of exceptional and he has been central to the organisation’s modernisation.

Amongst many highlights, Mr Capralos was the Chairman of the Coordination Commission for the first-ever European Games, hosted in Baku, Azerbaijan in 2015. After remarkable success in this role, he continued as Chair for the second edition, held in Minsk, Belarus in 2019. This was a special year for Mr Capralos in many respects, but most notable of all his achievements was his election as a Member of the International Olympic Committee.

Two years on, Mr Capralos was elected as President of the EOC during the EOC General Assembly in his home city of Athens, and upon his election, he became a Vice President of ANOC. Despite the challenges he has faced since his election as EOC President, particularly with the COVID-19 pandemic, he has already made significant progress in his efforts to lead the European Olympic family to a stronger and more sustainable future.

Today we celebrate President Capralos’ birthday and wish him health, happiness and continued success in the future. Happy Birthday President!