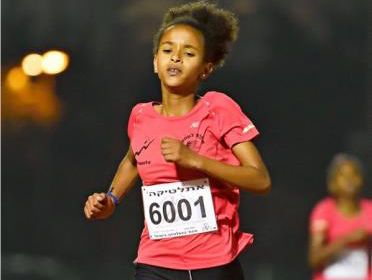 Nazret Kobodom, the 16-year-old Eritrean long-distance runner currently seeking asylum in Israel, is all set to compete at the European Youth Olympic Festival (EYOF) in Baku this 21-27 July.

The 2018 Israeli under-16 champion in cross country and 2,000 metres will travel to Azerbaijan with the Israeli Team and compete in the 300 metres event, for which she has an impressive personal best of 10” 40’.

It is the first time a refugee athlete will compete under the EOC flag at an EOC event.

At the Opening Ceremony, Kobodom will march in the parade of nations in an EOC uniform under the EOC flag together with her coach as the penultimate team ahead of Azerbaijan, who will enter last as hosts. She will also wear her EOC uniform while competing, but will otherwise spend the rest of her time with the Israeli Team wearing their uniform.

“My dream is to participate in international competitions and become a professional athlete,” Kobodom said.

Nazret’s family fled from Eritrea in 2011 and, after a long journey through Sudan and Egypt, entered Israel asking for asylum. Since May 2016, Kobodom has been part of the Alley Athletics Club in Tel Aviv, running in regional and national competitions.

The EOC Refugee Athlete initiative follows the first-ever Refugee Olympic Athletes team that competed at the Olympic Games Rio 2016, when the International Olympic Committee (IOC) announced a selection of 10 refugees competing under the IOC flag. History will repeat itself next year in Tokyo when an IOC Refugee Olympic Team is expected to compete in eight sports.

With the aim of harnessing the power of sport to build inclusive communities, the EOC is also cooperating with Peace and Sport, a neutral and independent worldwide organisation that uses the values of sport as a tool for peace.

Peace and Sport is currently working with the United Nations High Commissioner for Refugees (UNHCR) on the topic of sport for refugees, with a view to increasing the opportunities offered to refugees to practice sport at all levels.

This topic was also discussed at the last EOC Seminar during a panel session “The European model of sport and its value for civil society and social integration,” where interesting initiatives of inclusion were discussed.