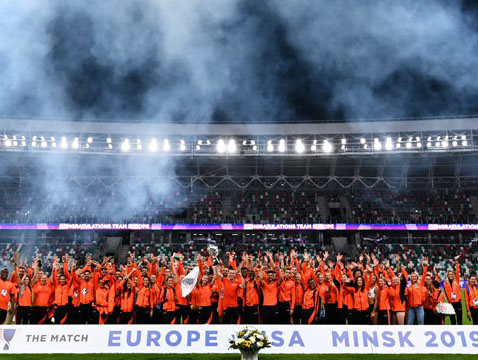 EUROPE TRIUMPHS OVER UNITED STATES IN “THE MATCH” OF ATHLETICS

Team Europe won the inaugural edition of “The Match Europe v USA”, which was held in Belarusian capital Minsk on 9-10 September.

The Athletics battle saw the Europeans holding a 27-point lead after the first day of two and steadily increased their advantage throughout Tuesday to win by a 724.5-601.5 margin.

This event was the last major athletics competition before the World Championships in Doha from 27 September to 6 October.

Among their winners was the quartet of Germany’s Patrick Domogala and Jessica-Bianca Wessolly, Poland’s Iga Baumgart-Witan and Bosnia and Herzegovina’s Amel Tuka in the event-concluding mixed 4×400 metres relay, due to make its Olympic Games debut in Tokyo next year.

“I would like to congratulate Team Europe on a fantastic victory at The Match and I would also like to pay tribute to Team USA who were great visitors and fought for every point right to the end,” said European Athletics President Svein Arne Hansen.

“We brought not only a strong team to Minsk for the The Match but also a very diverse team. I was delighted that over 30 nations were represented on Team Europe which shows that athletics in Europe is in a very good place,” also added.

Hansen also warmly congratulated the Belarus Athletic Federation and the Local Organising Committee (LOC) for their dedication in staging The Match, which took place at the recently refurbished Dinamo National Olympic Stadium in the Belarusian capital.

“Belarus has been a great supporter and a wonderful host. I am delighted that so many of the athletes – from Team Europe and Team USA – were enthusiastic about the concept, but also so impressed by the quality of the facilities, organisation and hospitality in Minsk. I am sure the athletes will leave Minsk with only good memories,” he concluded.