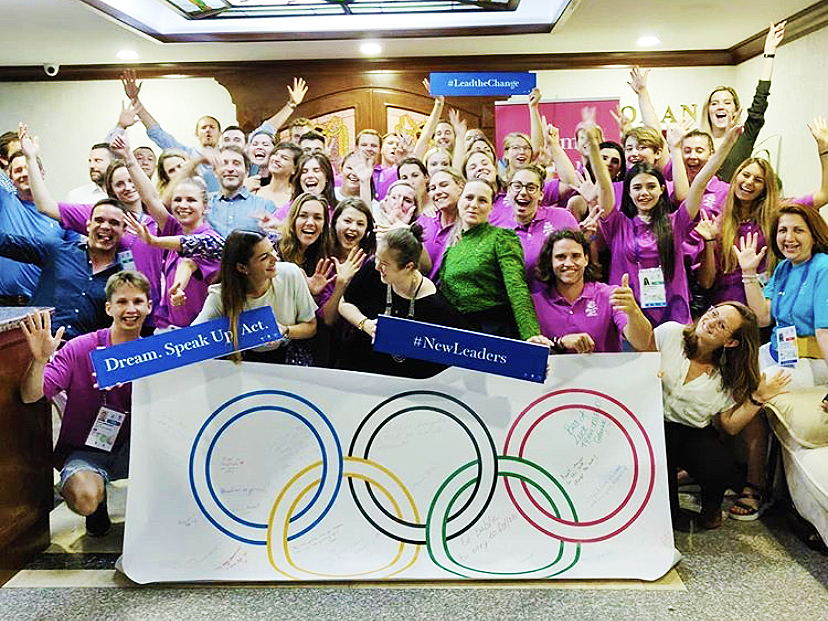 On the occasion of the European Youth Olympic Festival (EYOF) Baku 2019, the European Young Ambassadors had the opportunity to meet face to face with the European Game Changers who are participating in the New Leaders program.

The two groups of young people have spent the past months working together online, exchanging ideas and sharing their experiences of the Olympic values of friendship, respect and excellence for the benefit of the Olympic Movement. As part of the preparation for the EYOF, they have been creating special videos for the athletes that are being shown in the Athletes’ Village.

The European Young Ambassadors Programme aims to strengthen Olympic values among young athletes participating at the EYOF and encourage them to delve deeper into the world of sport, going beyond the field of play, and discover the power of the Olympic Movement.

The driving force behind this initiative is the EOC Olympic Culture and Legacy Commission, led by Chair Susanna Rahkamo: “By bringing together these two groups of young people, we are creating a platform to inform and educate the athletes participating in the EYOF about the Olympic Movement with the aim to spark their curiosity and interest in embracing the values of friendship, respect and the pursuit of excellence.”

“The young athletes at EYOF are in their teens, and are therefore in the process of making their own decisions and restructuring their values and beliefs, so our intention is to show them how through sports they can make a big impact not only on their personal glory but on people near and far, to connect and build harmony in the world since the Olympic Movement is the biggest peace movement on the planet.”

To bring this concept to life, special educational activities are being organised in the Athletes’ Village in the recreational area. To learn more about the Young Ambassadors Program please visit www.eyof.org/