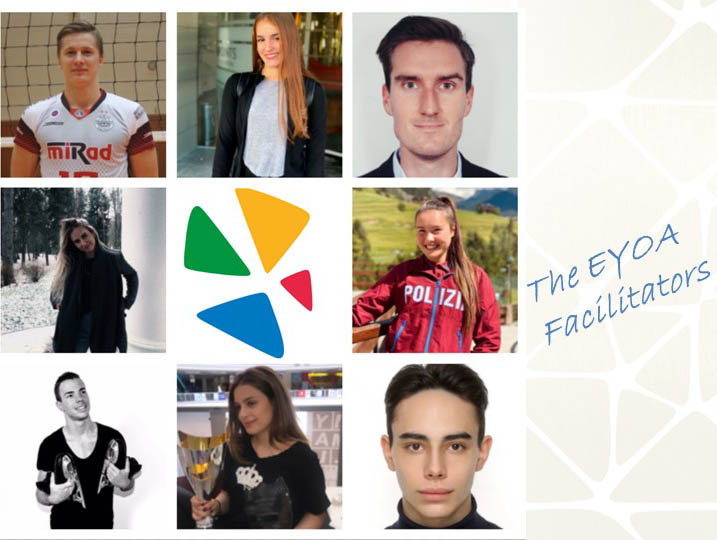 It is going to be a great Virtual Olympic Week: The European Young Olympic Ambassadors (EYOA) make progress in preparing educational activities

January 12, 2020, saw the fifth live webinar of the European Young Olympic Ambassadors programme taking place. Over the past weeks the participants have been actively brainstorming ideas for educational activities, which will be organised for athletes online during the original dates of the EYOF 2021 in Vuokatti. It is now time for the detailed planning and preparation of the educational programme. “Great progress has been made since our last meeting, and we are extremely happy” said Clea Papaellina, Head of the Education Team-EYOA Programme Vuokatti 2021.

One feature of the EYOA project is that the ambassadors are free to create their own programme based on their personal experiences and interests. Therefore, all activities will be organised in various innovative formats, but will all be focused on the same goal, to share the Olympic Values with young athletes throughout Europe.

Let us introduce to you the second group of participants – the group of Facilitators. The main activities of this group include creating educational games for athletes, guiding athletes through the educational activities, and facilitating interactions and communication between athletes from different countries.

Artem Markov (20) from Russia is a student of the Moscow State Institute of International Relations. Playing piano, chess, skiing, and reading feature at the top of his list of hobbies. Artem’s career goal is to become a politician. He views his participation in the programme as an opportunity to take an active part in the promotion of the Olympic Values and to do it with many energetic people from other countries. He believes that Olympism is the most effective tool of diplomacy that contributes to achieving peace and international understanding.

Gustav Andersson (28) from Sweden is a big football fan and has been playing since he was 6 years old. For the past 8 years, Gustav has been working as a football coach. In addition, he likes to play golf. Gustav aims to pursue his career within one of the international sports organisations and is looking forward to acquiring greater knowledge of the Olympic Family, connecting with mega sporting events and further improving his leadership skills.

Elisavet Voulgari (18) from Greece is currently enrolled at the University of Sofia where is pursuing a degree in Medicine. Elisavet speaks five languages. She fell in love with figure skating at the age of 12 and has participated in numerous competitions. In her free time, she plays piano and does ballet. For Elisavet, the idea of Olympism is “to think positively, live with honor and excellence”. The true value of Olympism is that “it helps to believe in yourself”.

Jorik Hendrickx (28) is a competitive figure skater from Belgium who has participated in five World Championships, five European Championships and two Winter Olympic Games. The opportunity to share stories and passions and to meet new people is what attracted Jorik to the EYOA project. Jorik says, “all athletes are unique in their own way. With a lot of hard work and determination you can achieve all your goals.” His message to everyone is: “Inspire others. Share the Olympic Values.”

Fausta Repečkaitė (18) from Lithuania is a cross country skier and is fluent in three languages. Therese Johaugt and Johannes Høsflot Klæbo are the athletes who have been role models and inspiration figures for Fausta. She describes herself as an active person who is always ready to learn new things. As for her participation in the EYOA programme, Fausta said, “I am ready to give my attention, love and lessons that I learned from webinars to the young athletes together with my experience and positive energy. I hope that together we are going to make the best EYOF.”

Kamil Pavlinsky (25) from Slovakia is a big fan of volleyball and has tried out many versions (classic indoor volleyball, beach volleyball, and even snow volleyball). He also has a background in tennis. Kamil encourages everyone to be the change that you wish to see in the world. He believes that participating in the EYOF programme will help him to learn something new and to meet people with the same passion for sport from around the world.

Daniella Ipsarides (18) from Cyprus is a four-time National figure skating Champion. Daniella is the first athlete to represent Cyprus in figure skating at the 2017 EYOF in Erzurum. She is currently a student of sport psychology in the USA. “Live in the moment” is the message that Daniella would advise everyone to adopt as a motto.

Elisa Confortola (18) is a short track speed skater from Italy. She took part in the 2019 EYOF Sarajevo and East Sarajevo and was a member of the Team at the 2020 YOG in Lausanne. “It never gets easier; it just gets better” is the phrase that motivates her. For Elisa, her participation in the programme will help her to become more sociable and extraverted and to make new friends from various countries of Europe.

EYOA alumni play an essential role in ensuring the success of the programme. This group of Facilitators is coordinated and supported by alumni participants Kristin Valdis from Iceland, Paulius Martinkenas from Lithuania, Alfred Varnik from Estonia, and Rebekka Dahl from Denmark.