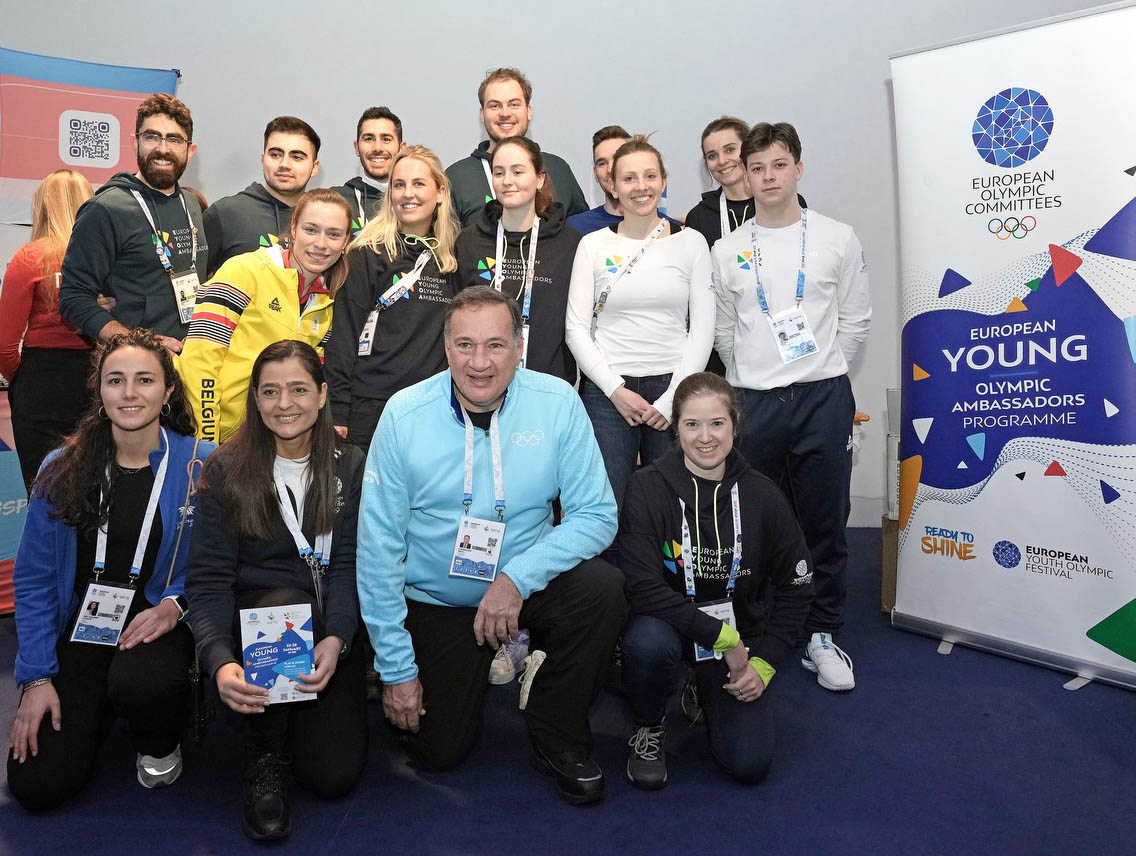 To mark International Day of Education, European Olympic Committees (EOC) President Spyros Capralos visited the EYOA’s booth at Casa Italia as the programme, now in its sixth edition, continues to invest in young people who are inspired by sport and the Olympic values.

The group of 26 ambassadors + 6 alumni (ex Ambassadors) in Italy, Austria and Slovenia for this week’s festival hail from a variety of different backgrounds and countries, including some from elite sport, and all share a passion for teaching the young competitors the values of friendship, respect and excellence.

More than 15 different activities have been prepared by the ambassadors, who since being selected have spent the past few months preparing for the programme with a variety of different webinars.

These include an Olyvision song contest and cultural meetings, which sees participants listen to music from other countries and learn about different cultures, as well as an Olympic quiz, where they learn more about the history of the Olympic Games, winter sports and the EYOF legacy.

As well as the fun activities, there were important workshops organised in collaboration with the International Testing Agency and the International Olympic Committee to educate the athletes on doping, match-fixing and the prevention of the manipulation of competitions.

EYOA alumni member Sintija Misina, who is out in Italy mentoring the new cohort of ambassadors as well as gaining experience in the EYOF’s social media team, hailed the creativity of the latest participants.

Latvian Misina said: “With Friuli Venezia Giulia taking place in clusters across the region, as well as in Austria and Slovenia, this Festival provided a different challenge for the latest Ambassadors – but it is one they have risen to brilliantly.

“The different activities they have come up with and the way they have interacted and educated the more than 1300 athletes taking part has been fantastic to see and represents everything this programme is about.”

After being on hand to present the first medals of the games on Sunday, President Capralos took part in some of the organised activities during his visit and was delighted to see the EYOA programmme thriving six years after its creation.

Capralos said: “While the focus will be on the athletes in Friuli Venezia Giulia, making sure the next generations are fully instilled in the Olympic values off the slopes and rinks is just as important.

“I am thrilled to see the latest Ambassadors step up to the mark to ensure the sixth edition of the programme has been just as successful as the previous five.

“It was brilliant to take part in some of the activities they had organised and to speak to some of the leaders of tomorrow.”