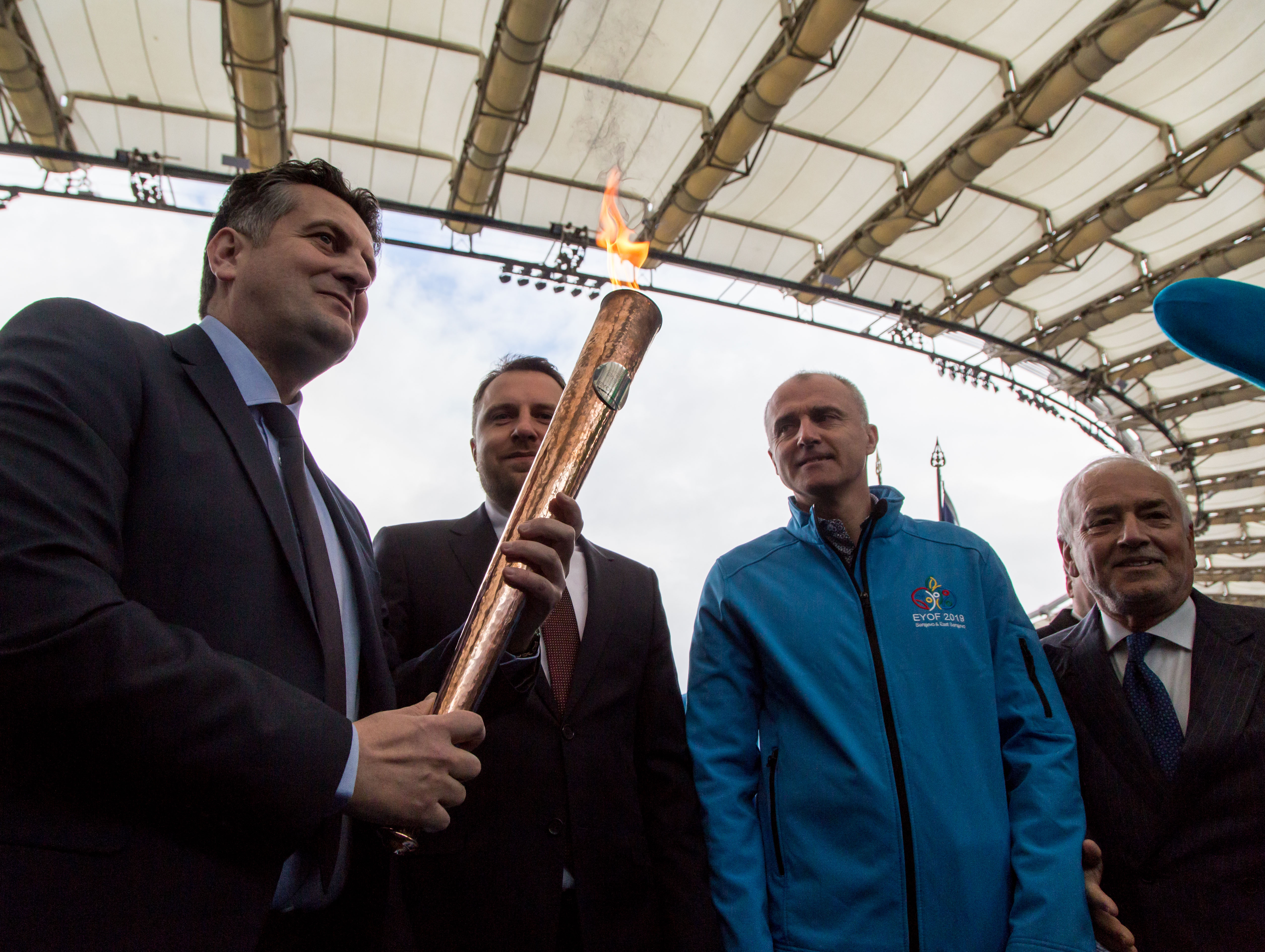 Another moment in the sporting history of Sarajevo & East Sarajevo was made today with the lighting of the flame for the 2019 Winter European Youth Olympic Festival in Rome, the long-time home of the European Olympic Committees (EOC).

Representatives from the EOC, the local organising committee for the EYOF and regional dignitaries were on hand to celebrate at the Flame of Peace Ceremony, held just 10 days before the start of the event that will run from 10-15 February.

The flame will make its way back to Bosnia and Herzegovina in a convoy of Jeeps in time for the Opening Ceremony, where it will be used to ignite the 1984 Olympic cauldron inside Asim Ferhatović-Hase Stadium.

Speaking at the ceremony at Rome’s Olympic Stadium, Sarajevo Mayor Abdulah Skaka said the European Youth Olympic Games are an opportunity for the people of Sarajevo & East Sarajevo to work together toward a common goal: a peaceful and prosperous future.

“I am very happy to be here,” said Skaka, “It is a very special moment. The EYOF 2019 means a lot for Bosnia and Herzegovina and we look forward to meeting you in Sarajevo and East Sarajevo.”

East Sarajevo Mayor Nenad Vuković said: “I would like to thank the EOC for its continuous support, which provides us with the needed energy to deliver a successful event. Receieving the Flame of Peace was very emblematic for our two cities.”

In addition to the flame, EOC Secretary General Raffaele Pagnozzi presented the mayors and the CEO of the local organising committee Senahid Godinjak with The Dea Pax Golden Olive Tree sculpture, a symbol of peace and friendship whose branches represent the unfolding of the EOC umbrella to receive athletes from all European National Olympic Committees.

The olive tree was considered sacred by Dea Pax, the Roman goddess of peace, and the sculpture, made by the renowned sculptor and goldsmith Nicola Amato, was designed in homage to these values.

“At the time of the ancient Olympics, months before the Games, messengers of peace went out across all of Greece proclaiming the Olympic Truce,” said EOC Secretary General Pagnozzi. “In much the same way, the Flame of Peace has been lit for the Sarajevo and East Sarajevo EYOF and wish that together with the Olive Tree they will bring lasting peace and prosperity to all your people.”

Among participants featured also Giorgio Brandolin, the President of CONI Region Friuli Venezia Giulia, future host of the Winter EYOF 2023, who was really excited to get a first taste of such emotional atmosphere.

“It is a great pleasure to be here for the Shine Ceremony. Above all, because we are seeing from the friends of Sarajevo and East Sarajevo that there is great enthusiasm in organising such events,” Brandolin stated. “In 2015 we organised the Summer EYOF in Lignano Sabbia D’oro and for us is like living again the emotions from the past but looking at the future. We hope that, also by means of the experience of Bosnia and Herzegovina, we will be able to best represent our region and deliver the young European athletes a successful event.”

The EYOF will shine a light on the best young winter athletes from across Europe and give them an opportunity to cut their teeth at an Olympic event, many for the first time. In total, 46 European National Olympic Committees have committed to participating in Sarajevo & East Sarajevo, with upwards of 1,600 athletes aged 14-18 competing in eight sports: alpine skiing, biathlon, cross-country skiing, figure skating, ice hockey, short track speed skating, snowboarding and curling.