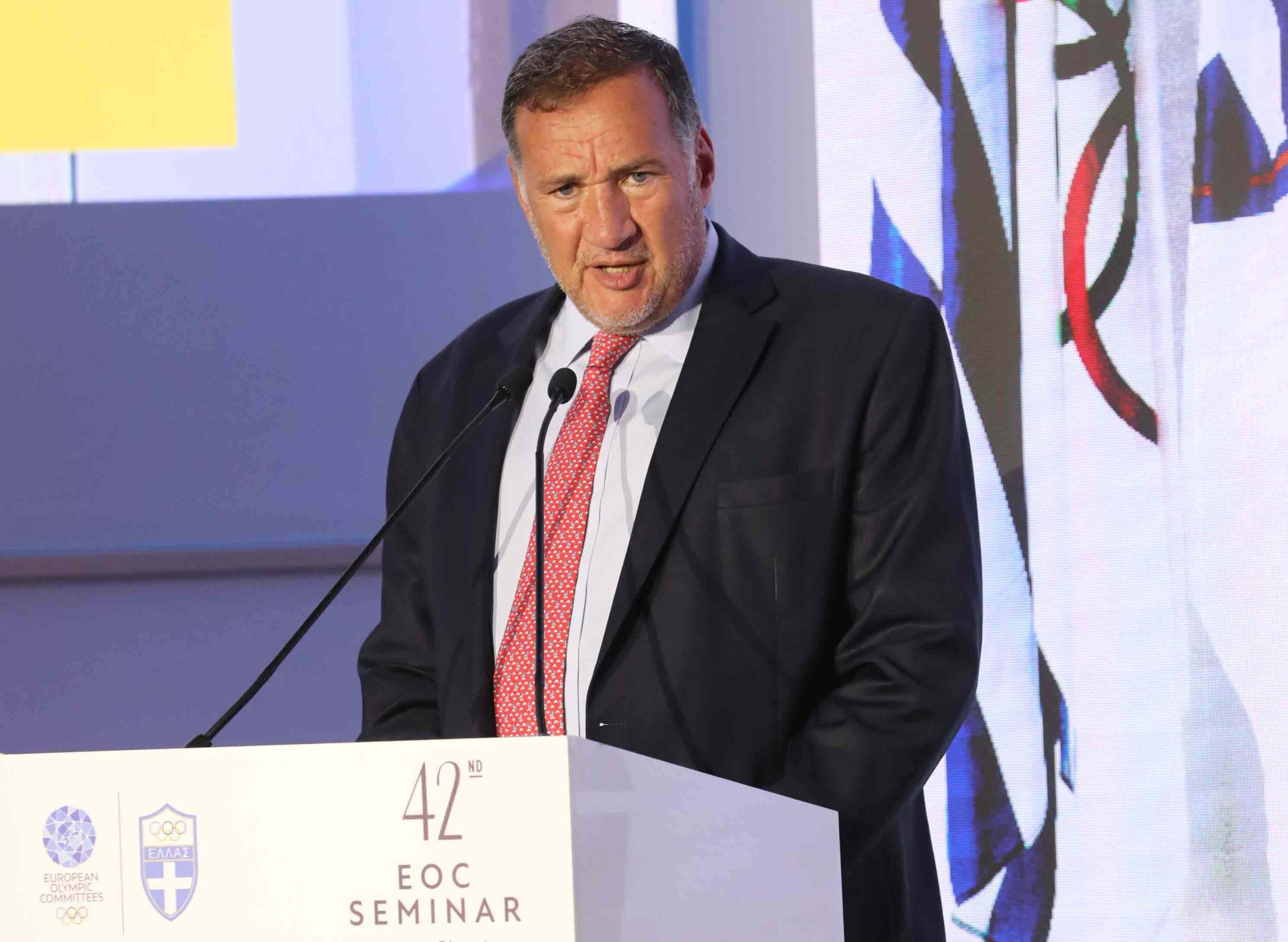 The first day of the 42nd European Olympic Committees (EOC) Seminar has ended at the International Olympic Academy (IOA) in Olympia, Greece.

The seminar started with welcome addresses from EOC President Spyros Capralos and the President of the International Olympic Academy Isidoros Kouvelos.

“I hope you enjoyed the morning tour of the Museum and even more so, the visit to Ancient Olympia, the birthplace of the Olympic Movement. The Ancient Stadium, where the EOC Executive Committee completed the relay to promote the #BeActive campaign for the European Week of Sport, is a unique venue etched in history. It is a location everyone involved in the Olympic Movement should visit.”

With the majority of European National Olympic Committee delegates attending in person, EOC General Secretary Raffaele Pagnozzi emphasised the importance of discussing ideas with colleagues from across the continent and to share knowledge with each other.

ANOC Secretary General, Gunilla Lindberg, began her presentation by explaining the organisation’s Strategic Plan Assessment, which included a 12-point questionnaire that was sent to NOCs for their feedback. She clarified the organisation’s plans to promote gender equality with a new regulation that requires at least one female to be a member of the ANOC Executive Council and every commission. She also highlighted ideas surrounding the international sports calendar and how to better manage this for the benefit of athletes.

The next presentation was from Pamela Vipond, the IOC Olympic Solidarity Deputy Director.  Ms Vipond, spoke about recent activities from European National Olympic Committees (ENOCs). She expressed her satisfaction at the unprecedented support shown by ENOCs to the Ukrainian Olympic Community, as several countries opened their doors to Ukrainian athletes to help them prepare for upcoming events. The Solidarity Fund, created by the IOC and the EOC, received donations from the Olympic Movement of over $2 million, which included significant contributions from the ENOCs. Ms Vipond stressed that the next important steps towards helping the athletes of Ukraine would be to create a strategy to distribute funds and help them prepare for qualifying events for the Olympic Games Paris 2024 and the Olympic Winter Games Milano-Cortina 2026.

Chair of the Working Group and Secretary General of the Serbian Olympic Committee, Djordje Visacki, informed delegates on the progress that has been made to develop the EOC’s Strategic Agenda 2030. The first phase of the project was a comprehensive NOC Consultation, which derived key findings and insights from a survey and interviews with all 50 NOCs. ​His presentation focused on the six key strategic priorities centred around the EOC’s approaches to facilitate and strengthen support for NOCs, ideas to advance holistic support for personal and professional development of athletes and techniques to foster gender equality and inclusion in EOC sports events. Additionally, fundamental concepts for the Strategic Agenda 2030 involved the EOC’s Governance and Management and how to implement policies aligned with the IOC Good Governance Principles respecting the highest ethical standards​, as well as methods to deploy a robust and diversified marketing strategy to enrich experience related to the EOC Sport Events.

One of the highlights of the Seminar was the 11th Summer Edition of the Piotr Nurowski Prize (PNP) for the Best European Young Athlete. The five finalists gathered at the Gala Dinner, held at the Touris Club, to await the results of the vote for the winner of the prize. Serbian high jumper Angelina Topić narrowly won as she edged out Great Britain diver Andrea Spendolini Sirieix in the votes by 33% to 31%.

The annual prize is awarded to up-and-coming young athletes, who in recent months have showcased not only outstanding sporting achievements but also exceptional conduct on and off the field of play, with Topić coming out as the thoroughly deserving winner.

The agenda for Day 2 of the Seminar includes, the 15th European Laurels Awards, the EOC’s Sports Programme overview and reports on the 3rd edition of the European Games Krakow – Malopolska 2023.