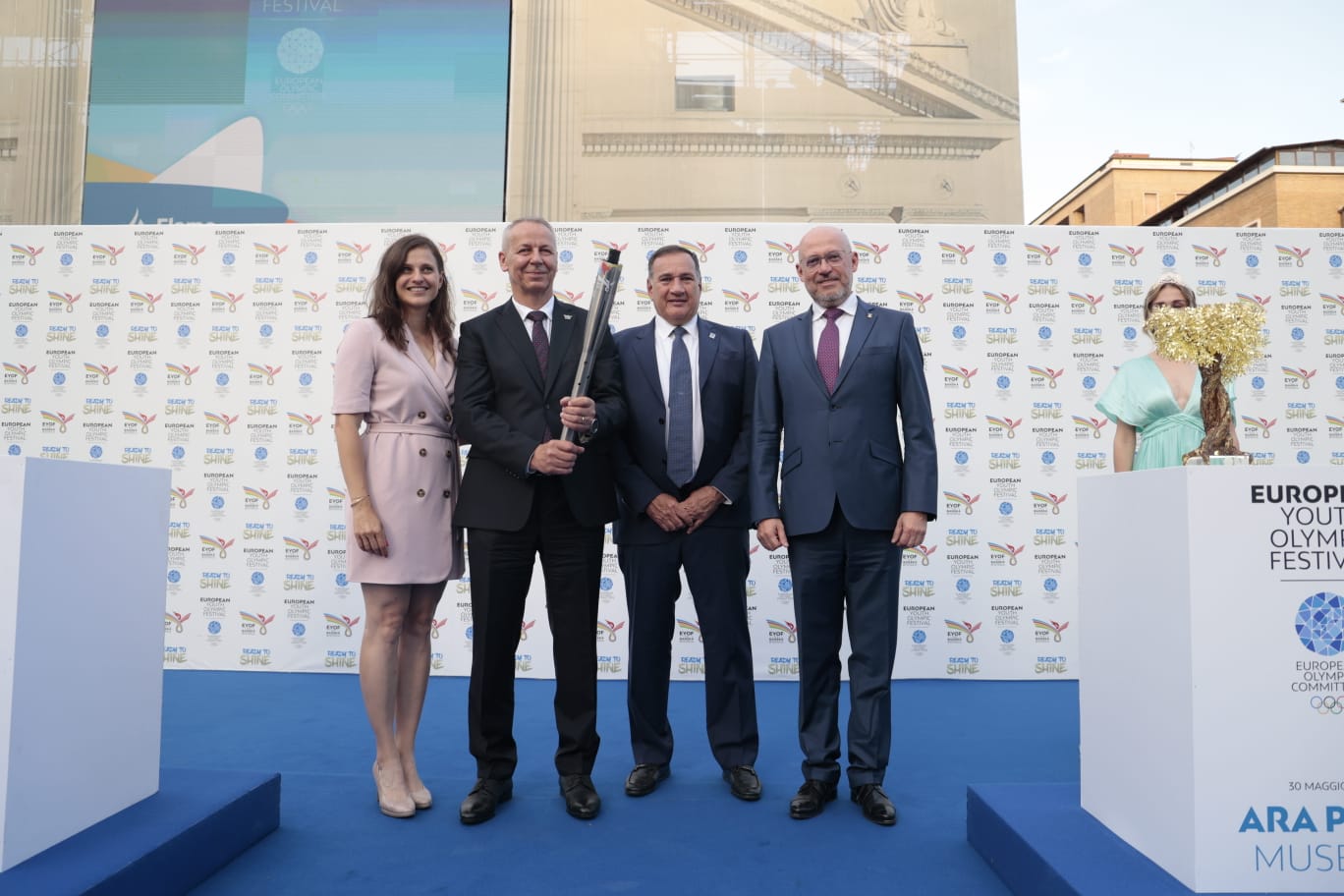 A major milestone in the preparation for the 16th Summer European Youth Olympic Festival (EYOF) Banská Bystrica 2022 was reached today as the Flame of Peace was lit in Rome at the Ara Pacis Augustae, a monument built by Emperor Augustus to celebrate peace throughout the Roman empire.

With just over 50 days to go until the start of the summer edition in Slovakia, representatives of the EOC, the EYOF Banská Bystrica 2022 Organising Committee, the National Olympic Committees (NOCs) of Slovakia and Italy, and the Municipality of Rome gathered for special celebration of peace through sport.

EOC President addressed the delegates, saying, “After the success of the Vuokatti Winter EYOF earlier this year, I am sure you all share my excitement for what’s in store in Banská Bystrica this July. The historic Ara Pacis truly is the perfect setting for today’s ceremony, and it is a reflection of the values we seek to promote through the EYOF. Each time we host this magical event, the flame of peace is lit as a beacon of hope and optimism for people all over Europe.

“However, this time the message has taken on even greater importance, with the war in Ukraine showing no sign of coming to end. The crisis remains at the forefront of all our minds and we pray every day that peace imminently returns. Through sport, we can, and we must continue to set an example for society. Our actions are ultimately what will define us, and I am proud of the way the European Olympic family, especially Slovakia, has stood firmly in solidarity with Ukraine.”

Councilor for Tourism, Great Events and Sport for the Municipality of Rome Alessandro Onorato wished good luck to Slovakia and expressed that, “The lighting of this flame of peace sends an important message to the whole of Europe, the message that through sport Europe can learn to live in peace and fraternity, and provide a better tomorrow for our Youth, who are destined to become citizens of a new world.  Olympic sport is indeed not just sport but also education.”

Slovak Olympic and Sports Committee President Anton Siekel added, “The Shining Ceremony is a significant milestone on the exceptional path of preparations for EYOF Banská Bystrica 2022. It reminds us, that we are approaching the final stage before the start of the most important multi-sporting event in Slovakia. After the ceremony the fire sets out on a pilgrimage through Slovak towns and villages to commemorate not only the approaching EYOF in Banská Bystrica 2022, but also the Olympic values and ideas of peace and brotherhood.”

President Capralos led the handover of the Torch as well as the The Dea Pax Golden Olive Tree sculpture, a symbol of peace and friendship. President Siekel, and Mayor of Banská Bystrica and Organising Committee President Jan Nosko, represented the Slovak delegation in receipt of the symbolic objects, alongside young volleyball star Alexandra Fričová.

Mayor Ján Nosko, said “I am very pleased that the EYOF will take place in Banská Bystrica. It is an honour for us and, as the European City of Sport 2017, we will take on a difficult task that is not only a challenge but also a big commitment. More than 3,000 visitors are expected to come to Banská Bystrica, which is an economic benefit for the city. We are only 55 days away from the biggest multisport event in Europe and I believe that we will be able to deliver a great event, from which everyone will keep an unforgettable experience, enjoy a unique atmosphere and meet new friends.”

Around 3,000 athletes from 48 NOCs will travel to Banská Bystrica from 24-30 July 2022, competing in 11 sports and sending a message of unity to the youth of Europe.