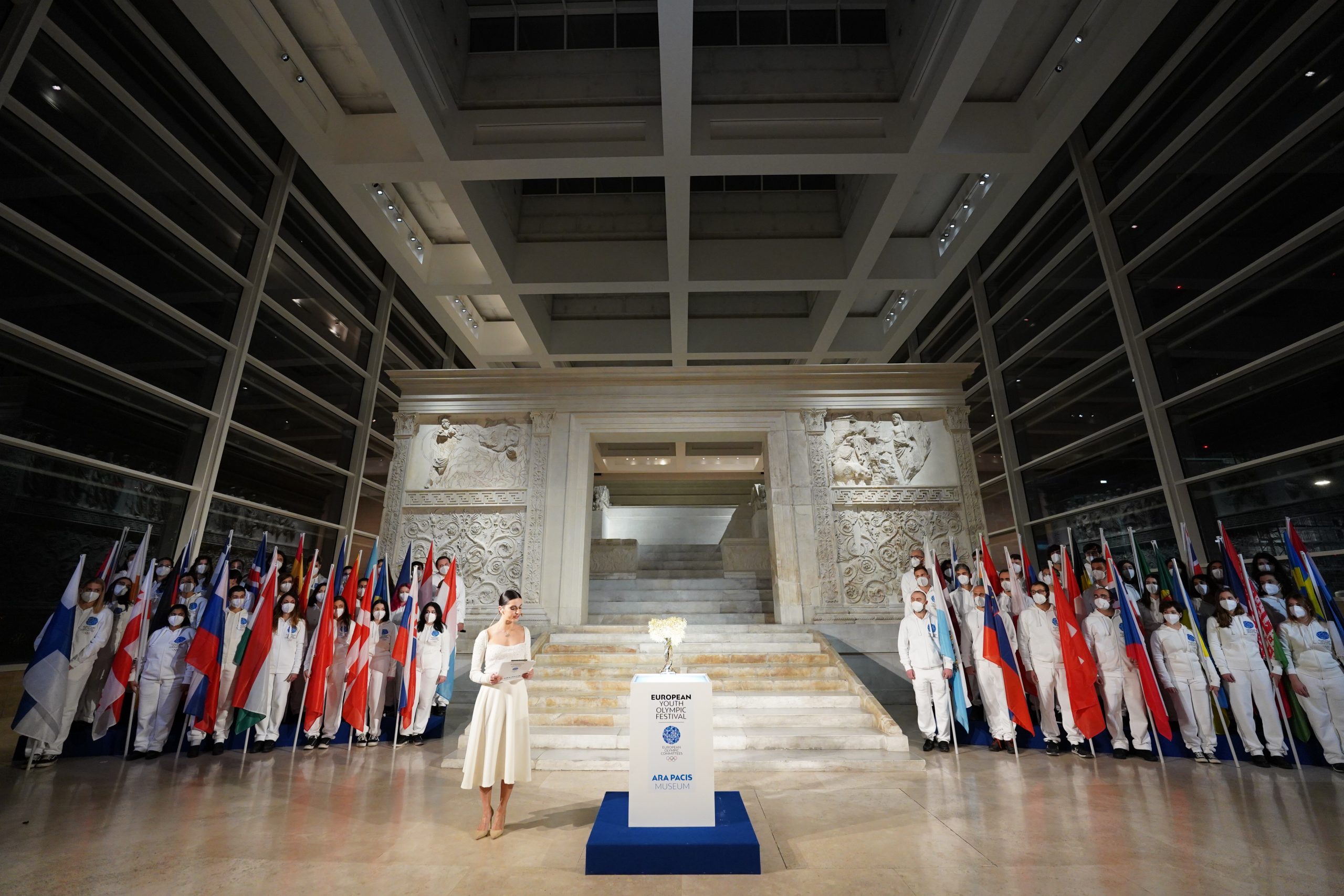 The Flame of Peace for the Vuokatti 2022 European Youth Olympic Festival was lit today in Rome at an elaborate Shine Ceremony held at the Ara Pacis Augustae, a monument built by Emperor Augustus to celebrate peace throughout the Roman empire.

With a little over 100 days to go until the main event gets underway in Finland, representatives from the European Olympic Committees (EOC) and the local organising committee for the EYOF were present to celebrate the lighting of the torch.

“Today we are celebrating peace and brotherhood, as the European Olympic Youth Festival at its core has always been an occasion to bring together the youth of Europe in peaceful competition,” said EOC President Spyros Capralos.

“The EYOF were first brought to life by former EOC and IOC President Jacques Rogge, who presided over the first edition in Brussels in 1991. As Vuokatti 2021 will be the first EYOF held since his passing, I would like to dedicate this edition to him.”

“In keeping with the times, we are also celebrating sisterhood today. We are pleased to announce that Vuokatti will be the most gender-balanced EYOF in the event’s history, thanks to the inclusion of girls’ ice hockey and Nordic combined. This is a tremendous achievement and something we can all be proud of as we continue to work for equal rights in all areas of sport.”

Making EYOF history, Vuokatti will host the event for a second time having first held the event when it was known as the EYOD twenty years ago.

“This has been a long way to organise this EYOF and I think this flame ceremony is one big stop and celebration in our special journey and I would like to thank all those that have made this possible. We are looking forward to welcoming you all to Vuokatti in March next year,” said Mika Kilpeläinen, Mayor of Sotkamo and Chief of Organising Committee of EYOF Vuokatti 2022.

Finnish Athlete Veera Immonen who participated in the EYOF 2019 in Sarajevo was on hand to light the torch, the same torch that was used for the EYOD in 2001.

In addition to the flame, the representatives from Vuokatti 2022 were presented with The Dea Pax Golden Olive Tree sculpture, a symbol of peace and friendship whose branches represent the unfolding of the EOC umbrella to receive athletes from all European National Olympic Committees (ENOCs).

The olive tree was considered sacred by Dea Pax, the Roman goddess of peace, and the sculpture, made by the renowned sculptor and goldsmith Nicola Amato, was designed in homage to these values.

Vice President of the Italian National Olympic Committee (CONI) Silvia Salis and Paola Mattoccia from the Municipality of Rome were also present and addressed participants.