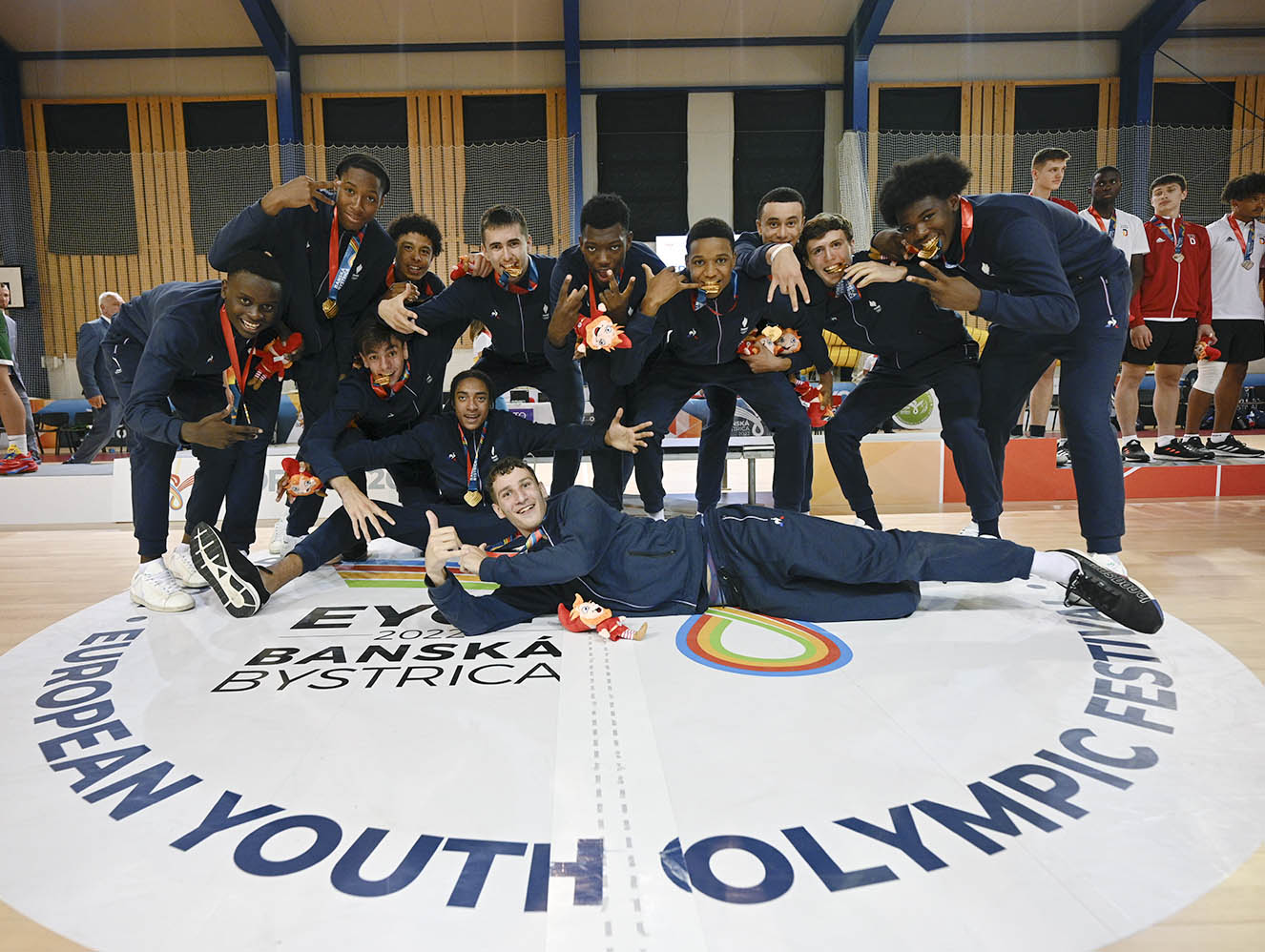 The final day of action at the European Youth Olympic Festival (EYOF) Banská Bystrica 2022 came to a close with France coming out as the victors in the boys and girls basketball events in Slovakia.

Lithuania, who had been the dominant force throughout the preliminary rounds of the boys basketball competition, were unable to stop the relentless French team from scoring freely in the second quarter of the gold medal match. France, who outscored Lithuania 23-8 in a memorable second quarter, had to overcome a slow start, and were behind after the first eight minutes of action in the Badin Basketball Hall. The French team showed their grit and determination to come out on top, with the match finishing 78-66 in their favour. Similar to the boys final, the French girls team put on a defensive masterclass in the third quarter, which included an outstanding total of eight blocked shots, to outscore Spain 16-3 to propel themselves to the coveted gold medal. Germany and Hungary both took home the bronze medal in the boys and girls events after defeating Slovenia and Belgium by double digits.

The Detva Handball Hall hosted the girls handball final, which saw the talented Hungarian team put in an incredible first half performance against Denmark to leave Banská Bystrica with the gold medal. Hungary led Denmark 14-9 at halftime to give themselves a comfortable cushion going into the second half. Denmark did not accept defeat and showed plenty of fighting spirit to push Hungary to their limit in the second half. Norway defeated Germany 28-23 to capture bronze in the girls handball competition. In the boys event, the Handball Hall Zvolen hosted an exhilarating final between Germany and Denmark, which saw the German’s score a goal with the last play of the game to snatch the gold medal in a match that will be remembered for years to come! Germany’s late surge in the second half was led by the inspirational Alexander Leonard, who ended the match with four goals. Portugal overcame the challenge of Croatia to win bronze in a nonstop, action filled match that saw each team exchange leads multiple times. Three Portuguese players ended the match with four goals to secure third place.

Italy seized the gold medals in the boys and girls volleyball competitions, after dominant displays against Bulgaria and Turkey to add to their country’s medal count. In the boys final, Italy showed superb communication skills and poise to defeat Bulgaria in straight sets, while the girls team overcame the Turkish fight back in the third set to eventually win gold in four sets. In the girls bronze medal match, Serbia showed tremendous team spirit to take the contest to a deciding set after trailing 2-0 however, Poland were able to regroup and won the final set 15-12 to claim third place in an unpredictable match.

Spain’s young star Mario Palencia won gold in the boys 2000m hurdles event after demonstrating a combination of endurance, composure and an elite level of concentration to record a new personal best time of 5:46.94. The breath-taking race saw eight young athletes record either new personal best or season best times, included silver and bronze medal winners Jan Skarban and Alin Savlovschi of the Czech Republic and Romania respectively. Palencia was able to pull away from his track rivals at the beginning of the final lap, which had the animated crowd at the Sports Park Athletics venue on their feet in anticipation of a close finish. The Spaniard sensationally overtook Skarban to win the energy sapping race by less than a second to bring an end to what has been an unforgettable week of competition for all the young involved.

Italy finished the 16th edition of the EYOF event in first place on the medal table, with an astonishing 47 medals in total, including 21 golds across the ten sports. Germany left Banská Bystrica in second place thanks to several outstanding performances by their young athletes to end the week with 9 gold medals, while Spain completed the national podium positions by recording 8 golds, just one ahead of Great Britain.

The action at the EYOF Banská Bystrica 2022 may have come to a close, but it is safe to say that the future of European Olympic sports is looking brighter than ever! Many of these athletes will seek to improve on their results here in Slovakia in a year’s time, when the EYOF takes place in Maribor, Slovenia for the 17th edition of the event.