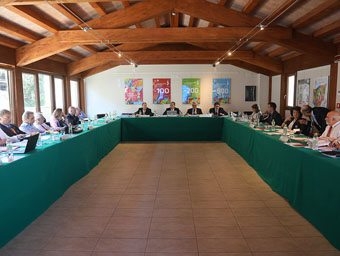 Just a few hours before the Opening Ceremony delegates of the Olympic Committees of the Small States of Europe met Tuesday morning at the Palazzo Graziani in the historic centre of San Marino, where, in a friendly and constructive atmosphere, the delegates nominated the President of the National Olympic Committee of Montenegro Dusan Simonovic President of the Assembly, thus formally accepting Montenegro’s candidacy to host the 2019 edition. The Montenegro GSSE will take place from 27 May to 1 June 2019. Bowls will be added to traditional sports.

The nine countries of the GSSE host games every two years on a rota basis, and Andorra has confirmed its candidacy for 2021, announcing an extended sports programme with the inclusion of Taekwondo, Karate, Cycling, Gymnastics and 3×3 Basketball.

In his capacity as member of the EOC, Mark Theisen spoke about the support Olympic Solidarity gives to the participating NOCs and the subsidy granted by the European Olympic Committees to the event, which was born under their wing.

At the next EOC General Assembly in Zagreb, the members of the Small States of Europe will hold at an extraordinary meeting, the aim of which is to improve rules for participation.

The sports ministers of Andorra, Cyprus, Iceland, Liechtenstein, Luxembourg, Malta, Monaco, Montenegro and San Marino at the opening ceremony of the Games of the Small States of Europe, which continue at the foot of Mount Titan until Saturday, also met and adopted a resolution to call for sporting events to be better supported and sustainable, both in terms of the environment and finances.

A resolution that, according to San Marino’s Secretary of State for Sport Marco Podeschi, should be seen as an example for all sports events, large or small, in the spirit of the recommendations of the IOC and the UN on climate change.