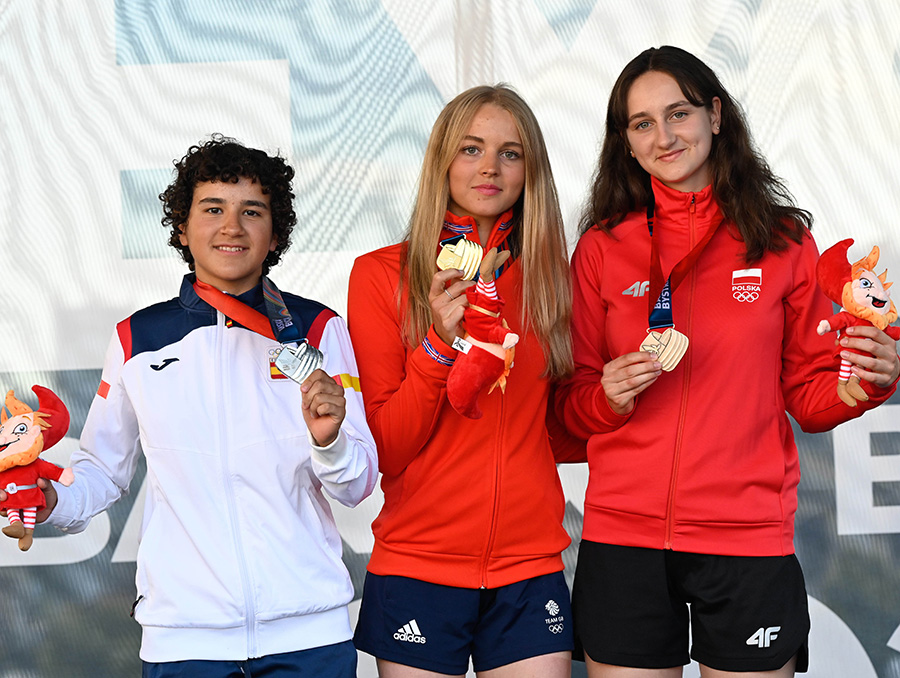 Day four of the European Youth Olympic Festival (EYOF) Banská Bystrica 2022 saw Cat Ferguson from Great Britain secure her second gold medal in as many races when she stormed to victory in the girls 57.8km road cycling race.

The greater Banská Bystrica area hosted another epic battle between Ferguson and her Spanish counterpart, Jessica Ostiz, who collected the silver medal in the girls 8.4km time trial on day two. Ostiz relentless pressing left Ferguson with no room for error down the stretch, as the two young stars battled it out for glory. The British athlete managed to maintain her lead to post a winning time of 1:32:08 to leave the EYOF Banská Bystrica 2022 with two golds. Italy’s Beatrice Temperoni finished in third, with a passionate fist pump at the end of the race leaving the crowd in no doubt how much it meant to her.

Ukraine claimed another medal inside the Sports Park judo venue, and this time it was a gold in the final of the boys 81kg weight category, as Stanislav Korchemliuk overcame the challenge of Azerbaijan’s Ismayil Zamanov with a tremendous display of physicality and determination. The talented young star looked speechless once he realised the outcome of the match!

History was made in athletics, where in the boys 400m final Matthew Galea won bronze to capture Malta’s first ever medal at an EYOF event. Galea, who recorded a new personal best time of 48.84, nearly stole the silver medal from Spain’s Fabian Vidal in a battle to the end as the crowd were rose to their feet during the home stretch. Noam Mamu ensured Israel took home the gold medal in impressive fashion, as he clocked a new personal best time of 47.60 to win the race. Slovakian Lenka Gymerska gave the home crowd reasons to cheer as she won silver in girls 400m event. The remarkable young athlete completed her best performance to date when she set a new personal best time of 55.23 whilst overtaking Maria Capota from Romania, who finished the race in the bronze position.

Mykyta Kudinov and Denys Mialkovskyi added to the Ukrainian medal count, with the pair winning bronze medals in the boys 50m freestyle and 200m backstroke events. Kudinov finished just 0.01 seconds behind French swimmer Falemana Lopez in a photo finish in the 50m freestyle race, which saw Davide Passafaro of Italy took home the gold medal in a spectacular event! Mialkovskyi left it all in the pool to hold off a late surge from Great Britain’s Conor Cherrington to win bronze in the 200m backstroke race, with Italy’s Daniele Del Signore securing silver to ensure that he would be leaving the EYOF with multiple medals. Hungarian starlet Alex Kovats displayed incredible endurance to win the gold medal with an emphatic performance in the evening session.

The action on day four kicked off at the Baseline Sport Arena, where Denmark’s Salomon Thomasen and Finland’s Nella Nyqvist come through tightly contested matches to win gold for their countries in the boys and girls singles badminton events. Thomasen overcome the highly competitive Swede Romeo Makboul in three sets, as did Nyqvist when she defeated Turkish sensation Ravza Bodur to be crown champion. Thomasen and Nyqvist have now earned the opportunity to compete at the European Games Krakow 2023 to add to the gold medals they won at the EYOF here in Banská Bystrica.

The penultimate day of action at the EYOF takes place tomorrow, where medals will be awarded for each artistic gymnastics discipline, athletics and much more. You can follow all the action on the EOC social channels, and via the livestream of events on the EOC Channel!