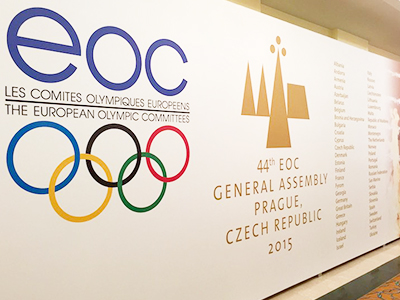 Prague, November 21, 2015 – European Olympic Committees (EOC) President Patrick Hickey has hailed 2015 as “an historic year for sport in Europe” at the EOC General Assembly in Prague in the Czech Republic.

This year’s General Assembly has brought together more than 350 delegates – including IOC President Thomas Bach and ANOC President Sheikh Ahmad Al-Fahad Al-Sabah, Honour Presidents from IOC and EOC, Jacques Rogge and Mario Pescante – from across European sport’s key stakeholder groups. The majority of delegates come from Europe’s 50 National Olympic Committees, and have been joined by members of the IOC and the IOC administration, and delegates from International and European Sports Federations, organising committees of the upcoming Olympic Games and Youth Olympic Games, cities bidding to host the 2024 Olympic Games, and other key sports organisations, as well as members of the media.

On the morning of the second day, the EOC awarded its European Laurels to five NOC’s sport leaders that, day after day, have put their efforts and expertise to the service of sport: Mrs Morana Palikovic Gruden (CRO), Mr Alain Geles (FRA), Mr Joseph Cassar, (MLT), Mr Ioan Dobrescu (ROU) and Mr Igor Kazikov (RUS)
–
EOC President Patrick Hickey said: “We are honoured that Prague is hosting the European Olympic family once again and the Czech Olympic Committee has done a terrific job in organising our General Assembly this year. “

“This is of course the year which we, finally, introduced a continental Games for Europe – and showed what a successful product it is. But we have been busy in many other fields as well, and it is only when we bring ourselves together that we can fully take stock of the great work being done within sport and society by the European Olympic family.”

The EOC has also provided an update on the process for selecting the host city for the 2019 European Games, with Patrick Hickey informing the General Assembly that: “Russia is still the EOC’s preferred partner for hosting the 2019 European Games. That is provided the independent authorities can confirm Russia’s ability to support an anti-doping programme that meets the highest international standards.”

The EOC will hold its next General Assembly in Minsk, invited by the Belarus NOC, which will celebrate its 25th anniversary in 2016. The NOC of Armenia, also a candidate, agreed most kindly to postpone its candidature to a future general assembly.