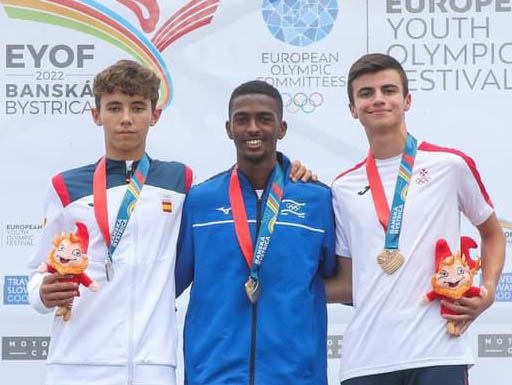 The boys 400m race on day 4 of the European Youth Olympic Festival (EYOF) Banská Bystrica 2022 was a thrilling affair from start to finish, which saw Mathew Galea secure Malta’s first ever medal at an EYOF event.

Galea, who posted a personal best time of 48.84, was only 0.2 seconds behind silver medallist Fabian Vidal from Spain in an iconic race that will live long in the memory for those in attendance. He spoke in an interview after the medal ceremony, where he described his immediate emotions after the race and explained what this could mean for the future of
athletics in Malta.

What did you feel when you looked up at the end of the race and saw your name in 3 rd place?

“It was a great feeling. The last 100m I felt something deep within me. I decided to give it everything I had, and before I knew it, I was the bronze medal winner! The medal is a bonus, but an extremely satisfying one!”

Did you except to win a medal at EYOF Banská Bystrica 2022?

“To be honest, no, I did not. I came here to get a new personal best time, but I kept on fighting, and I managed to get a medal in the end.”

What does it mean to you to have the honour of becoming the first-person representing Malta to win a medal at an EYOF event?

“It is a feeling that is hard to describe. I’m proud of my achievement, and I hope this can act as a catalyst to inspire more young athletes from Malta to win even more medals in future events. It’s been incredible to have had the opportunity to perform on this great platform here in Slovakia!”

What do you have to say to those young athletes who would have witnessed your accomplishment?

“I would say to them to keep going, never give up even though there are hard times. There is always a brighter future ahead if you work hard, listen to your coaches and believe in yourself.”

Besides winning the bronze medal, what has been your favourite experience here at the EYOF Banská Bystrica 2022?

“I have enjoyed meeting other athletes from different countries. It has been a great experience to stay in an Athlete’s Village. One that will stay with me forever. I have learnt a lot by participating here, and I look forward to competing in other international tournaments in the future.”

You can stay up to date with all the action at EYOF Banská Bystrica 2022 via the EOC social channels via the livestream of events on the EOC Channel!