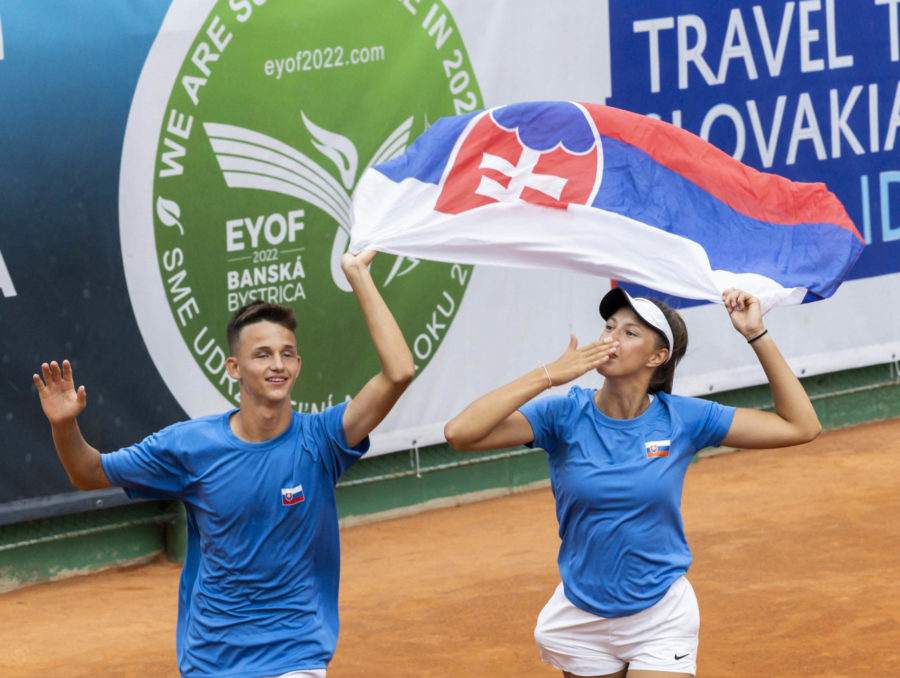 The penultimate day of action at the European Youth Olympic Festival (EYOF) Banská Bystrica 2022 resulted in Slovakia winning their first gold medals of the event, thanks to the unstoppable form of Renata Jamrichova, who won gold in both the girls singles and mixed doubles tennis competitions.

Centre court at the Sports Park tennis venue played hosted to the indominable Jamrichova, who secured gold by first winning 6-1, 6-0 in the girls singles final against Germany’s Philippa Farber. Jamrichova used a combination of a thunderous serve and supremely accurate groundstrokes to overpower her Farber to ensure that the host nation would leave Banská Bystrica with at least one gold medal. Jamrichova did not have to wait long to capture her nation’s second gold medal, when she and her partner Daniel Balascak defeated Romanian duo Eva Ionescu, who won bronze in the girls singles event, and Gabriel Ghetu in straight sets to mark a historic day for Slovakian youth sports! Antonina Czajka and Alan Wazny of Poland won bronze as they overcame the talented Finnish duo of Daria Bibanina and Linus Lagerbohm in a thrilling third set tiebreak to take home the medal.

The Zimný Štadión saw Helen Kevric and Radomyr Stelmakh of Germany and Ukraine win two more medals apiece for their countries, as the talented duo won three silver medals between them, with Kevric capturing the gold medal in the girls vault competition in front of a raucous crowd. The 14-year-old German star won her second medal of the day in the girls uneven bars event, which was won by Italy’s Martina Pieratti in sensational fashion. Meanwhile, Stelmakh made sure that he would be leaving Banská Bystrica with multiple medals, when he won silver in both the boys floor exercise and pommel horse competitions. He added to his personal medal count by utilising a blend of strength, agility and grace to climb up the leader board. Great Britain’s Danny Crouch and Kristijonas Padegimas of Lithuania secured the gold medal positions in the floor exercise and pommel horse events with near flawless displays of artistic gymnastics to impress the judges.

Swiss sensation Lucia Acklin produced an incredible performance to win gold in the girls heptathlon competition, as she finished with a total score of 5416. She ended the event 33 points clear of her nearest competitor, Estonia’s Viola Hambidge in an event that tested the young athletes skillset across seven events. Karl Ottfalk of Sweden demonstrated his endurance to win the gold medal in the boys 3000m with an astonishing time of 8:23.80. Lucian Steffan and Vittore Simone Borromini of Romania and Italy respectively, cemented their podium positions by setting new personal best times of 8:28.13 and 8:28.55 in a battle to the finish. In the boys 700g javelin event, Polish starlet Roch Krukowski and Italian Attila Herczeg finished first and second after smashing their previous personal best records. Krukowski sent the javelin into orbit when throwing for 73.63m to secure gold, while Herczeg showcased his obvious potential by recording a throw of 69.46m to finish clear of bronze medallist Stepan Sipek of the Czech Republic.

Julia Ackermann continued her fine form in the swimming pool, as the German added to her personal medal tally by winning the girls 800m freestyle competition. Ackermann recorded a time of 8:48.51 to finish the race nearly nine seconds ahead of silver medallist, Turkey’s Talya Erdogan, to send her teammates and supporters wild. Italian star Valentina Procaccini picked up her third medal at EYOF as she won bronze in an event that tested the stamina and technique of all the young athletes who participated.

The final day of the EYOF takes place tomorrow, where medals with be awarded for the first time in the basketball and volleyball competitions, as well as many others. You can follow all the action on the EOC social channels, and via the livestream of events on the EOC Channel!