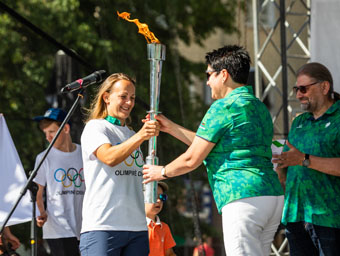 LITHUANIA – RECORD BREAKING NUMBER OF VISITORS AT THE OLYMPIC DAY

The Olympic Day put in place by the Lithuanian Olympic Committee (LNOC) in Panevėžys last June 2 attracted a record number of participants: 28,000 people, including 40 Olympians and Prime Minister of the Republic of Lithuania Saulius Skvernelis.

“Only 28 thousand? It felt like 51 thousand to me”, joked the Mayor of Panevėžys Rytis Mykolas Račkauskas at the end of the Olympic Day.

The free-of-charge LTeam participant passport challenges attracted 14 thousand people. Another 3,5 thousand participated in running, stand up paddle boarding, LTeam 3×3 basketball, bicycles and scooters challenges. During the Partners Cup 150 people participated in teambuilding activities, while the finals of the Lithuanian School Games attracted 500 pupils. According to the NOC, the participants also brought around 10 thousand supportive family members and friends.

“The number of the Olympic Day participants has increased again. Today Olympic, non-Olympic and Paralympic sports were joined in a harmonious unity and gained lots of popularity. Together with the residents of Panevėžys we managed to prove that we can achieve everything we want to. We are thankful to the city and its mayor for productive cooperation”, said the LNOC President Daina Gudzinevičiūtė.

The event was attended by families, sports enthusiasts and professionals. Around 30 Olympians, who participated at the event, tried out new sports or challenges.  Boxer Tadas Tamašauskas took up a challenge at the pavilion of Lithuanian wrestling, Member of Parliament Gediminas Vasiliauskas demonstrated his skills of acroyoga, and actor Marius Jampolskis participated in sitting volleyball challenge.

“I tried out a lot of sports and challenges, among them – judo and karate. In the beginning, I had no idea what to do during a fencing challenge, but I always welcome new experiences. The most exciting of them was an opportunity to ride a sports horse. This time I did not do a time challenge, instead, I simply enjoyed the pleasure of engaging in sports”, said Lithuania’s fastest marathon runner Diana Lobačevskė.

The Olympic Day was established by the International Olympic Committee 70 years ago. In Lithuania the first celebration event took place on May 13, 1989, where the Olympic champion Šarūnas Marčiulionis lighted the Olympic torch at the Gediminas Castle and sent it in a relay through the Baltic states until it reached the capital city of Estonia, Tallin.