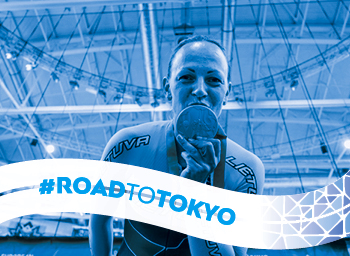 LITHUANIA’S KRUPECKAITĖ LIVING IN THE MOMENT ON ROAD TO TOKYO

Lithuanian track-cycling legend Simona Krupeckaitė is gearing up her fifth Olympic Games with zero expectations and even less pressure on herself.

While she admits it would be a dream come true to win an Olympic medal – the only thing missing from her overflowing trophy cabinet – the two-time World Champion, three-time European Champion and gold and silver medallist at the 2019 European Games says she has learnt from experience that it is better to stay loose and enjoy the moment than to burden yourself with lofty ambitions.

“I’m going to go to these Olympics with a smile on my face, because, I will be frank, I will probably not be thinking about a medal anymore when I go there,” Krupeckaitė, 38, says. “I am simply going to prove to primarily myself that I can still concentrate, can do what I can, that I can overcome stress, fatigue. That is my goal for this year.

“I know from my experience that you can’t go to the Games for a medal, you have to go there to do your best at that particular moment, and you have to train yourself to foster such an attitude. You simply have to learn to be where you are, enjoy what you do, and do your best.”

Krupeckaitė is set to join an elite group of Lithuanian Olympians this summer when she becomes just the sixth athlete from her country to appear at five or more Games. The list currently includes National Olympic Committee of Lithuania President and shooter Daina Gudzinevičiūtė, discus thrower Virgilijus Alekna, biathlete Diana Rasimovičiūtė and ice-dancing pair Margarita Drobiazko and Povilas Vanagas.

“I will enter into history at least in this way, not necessarily having won medals,” Krupeckaitė says with a laugh, having finished just off the podium at Athens 2004, Beijing 2008, London 2012 and Rio 2016. “Indeed, it is a huge achievement to be among the elite individuals for so many years and to keep winning fairly high places. Such things are very flattering. It also makes the work of the whole team meaningful. Because I would have never achieved it without the people who stand by me.”

Her team includes husband and long-time coach Dmitrij Leopold and fellow cyclist Miglė Marozaitė, with whom she will compete at Tokyo 2020 in the team sprint event, the same event the duo won silver in at Minsk 2019. Krupeckaitė will also compete individually in the keirin and individual sprint events.

Asked which of the three events she feels most confident about, she singles out team sprint as being the competition with the greatest opportunity for success, largely due to the fact that only eight teams from around the world qualified for it.

The individual events, she explains, are far more unpredictable. “Because both individual sprint and keirin are cat-and-mouse games, with a lot of uncertainty. And it very often happens that it is not only the favourites who take the entire podium of honour. Many things play a role here: accidents, burnouts, stress, tension and responsibility.”

Looking back at her glittering career, which began in earnest in 2003 when she claimed two silver medals at the U23 European Track Championships, she cites her world-record-setting win in the 500m at the 2009 World Championship in Poland as her favourite moment so far, as it was one of her toughest races. The competition produced an “unprecedented variety of emotions … from great joy to tremendous burnout.”

It also led her to being named Lithuanian Athlete of the year for the first time, an accolade bestowed upon her again in 2010 and 2016.

“For me it is a great honour to be granted the title of a Lithuanian Athlete of the year,” she says. “I am very proud that I was chosen as the best athlete as many as three times. It means both the love of the nation being shown to me and also a recognition by the sport community.”

Krupeckaitė also enjoys the support of her fellow athletes, having been voted by her peers in December onto the Athletes’ Commission of her NOC along with kayaker Edvinas Ramanauskas. It’s a role and responsibility she eagerly accepts.

“I like taking an interest in the topical issues of other sports, solving problems, finding common points of departure among the representatives of all sports federations,” she says. “The representatives of some sports can share their experience with others. This is a very meaningful activity in respect to both young and elite athletes.”

While she won’t rule out a post-cycling career in sports administration, Krupeckaitė says she isn’t thinking that far ahead yet – she still has too much left to give on the track, including taking part in the Union Cycliste Internationale (UCI)’s new Track Champions League beginning in November.

That said, could Tokyo 2020 possibly be her last Olympic Games?

“I think it is the last,” she says, laughing. “At least in the role of a cyclist. Although it seems to me that all the Games I attended were the last ones for me.

“But really, maybe that’s enough, maybe it’s time to feel the glow of contentment, even though Paris 2024 is only three years away …. Maybe I will get another crazy idea.”

It is safe to say that 2.8 million Lithuanians will be hoping she does get that crazy idea to carry on to Paris 2024, not to mention win that long-overdue Olympic medal in Tokyo in August.

“I think I could call it ‘a dream coming true’ – it would be a great achievement and would give me lots of self-satisfaction,” Krupeckaitė says about medalling in Tokyo. “However, since I don’t have it yet, I don’t want to think about it much.”

The track cycling events at Tokyo 2020 will take place from 2-8 August at the Izu Velodrome in Shizuoka. Click here for the complete schedule.