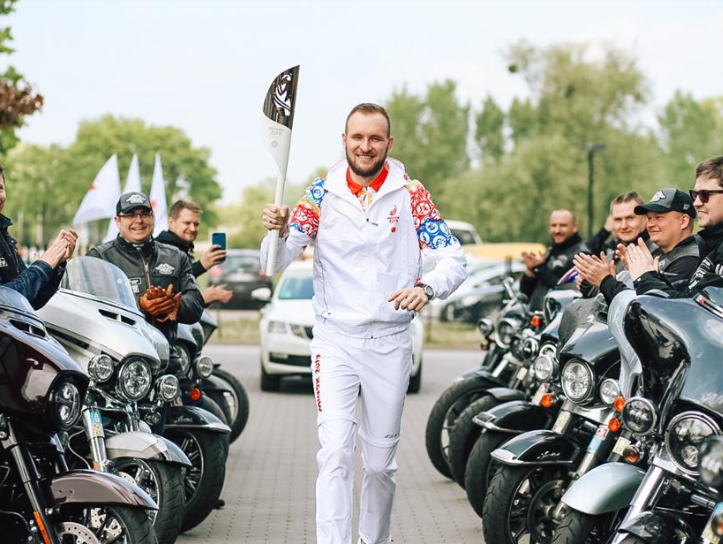 MINSK 2019 TORCH ENTERED BELARUS AFTER ITS JOURNEY ACROSS EUROPE

The Flame of Peace for the Minsk 2019 2nd European Games crossed the border into Belarus on 12 May, following an eight-day-journey across Europe.

The Relay was given a flying start when the Torch burned at the top of Mont Blanc after an ascent by members of Belarus Mountain Federation “The One Chapter Belarus”.

After that, on 8 May the Flame was carried in the Slovenian capital Ljubljana, where gymnast Saso Bertoncelj, who won pommel gold at the inaugural Games in Baku four years ago, received it from Belarus Honorary Consul Janez Skrabec.

From there, the bikers escorted the Flame along the banks of the Danube and took it to Austria on 9 May.

“I was especially surprised by these strong guys on bikes who have already covered thousands of kilometres,” Christoph Sieber, Olympic windsurfing champion at Sydney 2000 and Chef de Mission of the Austrian team in Minsk said at the reception ceremony in Vienna.

Perhaps the most emotional moment came when oldest living Olympic champion Agnes Keleti took part. She is 98 years old and won five Olympic gold medals, four of them at the age of 35 in the 1956 Melbourne Games, being a symbol of Hungarian sporting excellence.

A dozen of other Olympians and Paralympians joined an 11km relay and the Torch was carried by Canoeist medallist Katalin Kovacs, who had won Olympic gold at consecutive Games, and legendary swimmer Tamas Darnyi, who dominated the individual medley at Seoul 1988 and Barcelona 1992.

The Torch then passed through Braislava, Slovak and Czech Republic on 10 May. It was taken to Brno where the NOC organised a sports day for young people, including Minsk 2019 sports archery and judo.

“We were trying to find an unusual way to organise this ceremony and decided on this sports school,” said Belarus ambassador Valery Kurdyukov.

Poland was the final nation to be visited before the Flame reached Belarus soil. Martyna Dabrowska and Alexandra Gaworska, both 400m runners, carried the Flame to John Paul II Olympic Centre in Warsaw on 11 May.

The Flame lit the “Polish lamp”, which will be kept at the Olympic Centre and will be presented on 25 May at the 21st Olympic Picnic, a sports festival dedicated to the 2nd European games Minsk 2019.

The motorcade is now on the march in host nation Belarus, being the Torch first welcomed in the Brest Hero Fortress Memorial in the southwest corner of Belarus on 12 May.