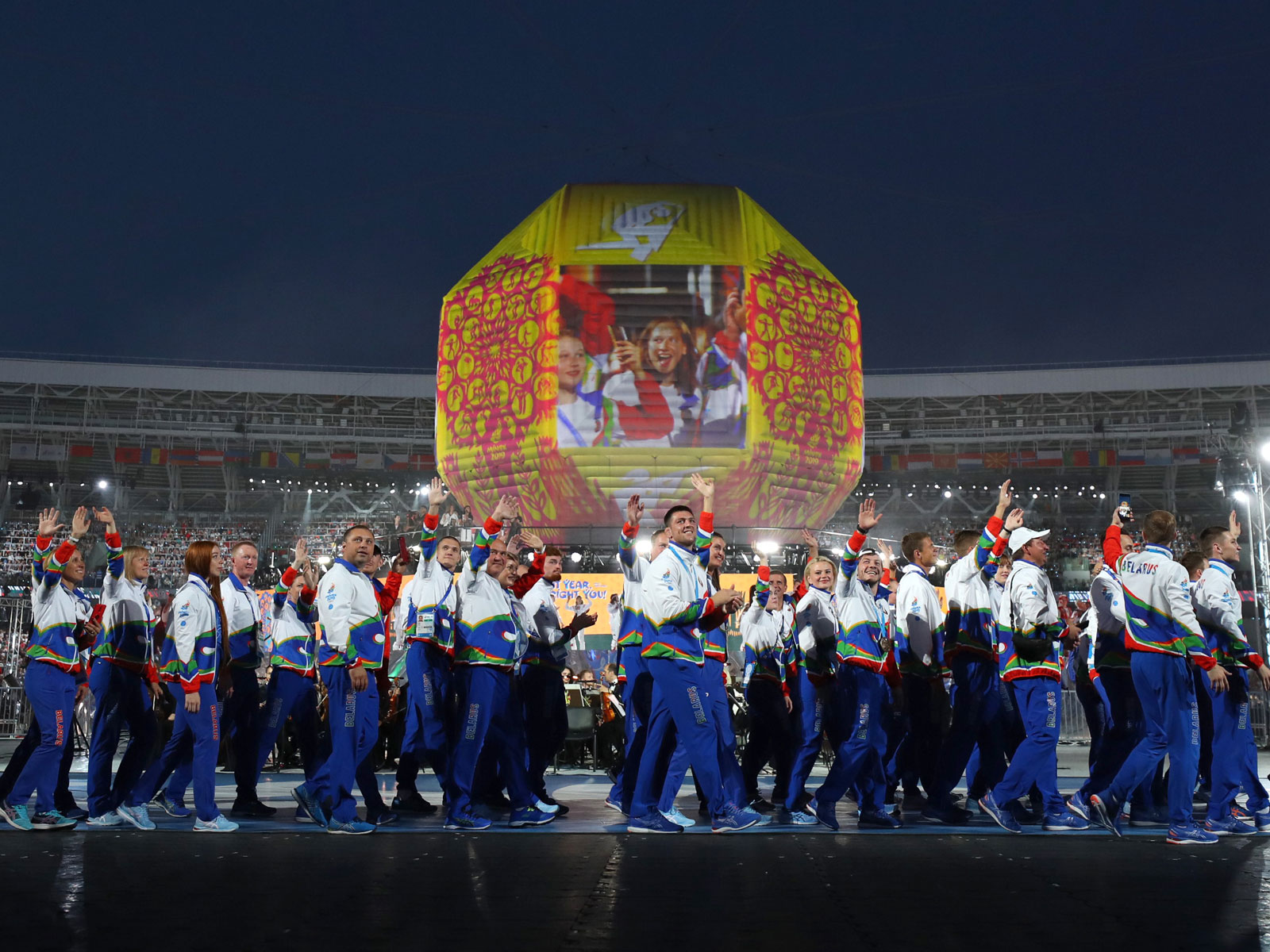 As the last flicker of the Flame of Peace was extinguished, the European Games Minsk 2019 came to an end on Sunday night after a grand Closing Ceremony, which paid tribute to the proud cultural history of Belarus and took a glance at the country’s bright technological future.

Minsk 2019 will be remembered for several innovations to enhance the fan experiences that have rarely been seen in multi-sports events before, such as the Games’ interactive chatbot, which allowed spectators to easily obtain information on everything from tickets to the latest results across social media outlets.

Continuing in this vein, the final ceremony was a digital extravaganza. Beginning with the opening City of a Thousand Voices episode – a nod to Minsk’s many start-ups and their achievements, such as the messaging app Viber – it merged live action and the virtual world through the latest advances in augmented reality.

With athletes from 50 countries across Europe parading through Dinamo Stadium and taking their place in the Circle of Honour for one last time, the Ceremony sought to pay tribute to the sporting exploits over the past 10 days through a six-part video series dedicated to different themes of elite competition.

Beamed on to a 16-metre tall polyhedron representing the National Library of Belarus – the country’s most renowned architectural and intellectual landmark – each clip covered the emotions that every athlete experiences, namely hope, passion, inspiration, empathy, sadness and euphoria.

The thousands of spectators packing the stands – illuminating the night sky with their smartphones and illuminated bracelets – were taken on an immersive journey through each and every one of these emotions through accompanying performances from dancers, aerial gymnasts and some of Belarus’ most iconic musical stars such as Iowa, J:Mors, Naviband, Shuma, and Teslaboy.

But while most of the celebration pointed towards the futurism of the digital age, it was embellished with symbols of Belarus culture going back through the centuries, with folklore bands performing a medley of traditional songs from across the six regions of the country throughout the athletes’ parade.

As in the Opening Ceremony, once again the giant Bison – a symbol of Belarus – appeared, this time with a poignant farewell message to the younger generation of Belarusians, reminding them never to forget their country’s past.

Few who experienced these European Games – the biggest sporting event to have been held in Belarus – will forget them, not least the athletes who took part, the many thousands of fans who watched them, and the 8,000 dedicated volunteers from all over the world who have helped make these Games such a resounding success.

But after 10 days of intense and high-quality sporting action, which saw medals decided, records broken and vital Tokyo 2020 Olympic Games qualification places obtained, it was Lesik – the Games’ loveable mascot who has been ubiquitous throughout Minsk over the preceding fortnight – who took centre stage to bid farewell.

Reciting the famous Na Kupalle poem by Yanka Kupala, one of the greatest Belarusian language writers of the 20th Century, the Flame of Peace was passed slowly from the Giant Fern-garnished cauldron to the fox’s heart to mark the official end of the Games.

In the words of George Katulin, chief executive officer of the local organising committee and Secretary General of the National Olympic Committee of the Republic of Belarus, “May the time of bright victories last as long as possible.”