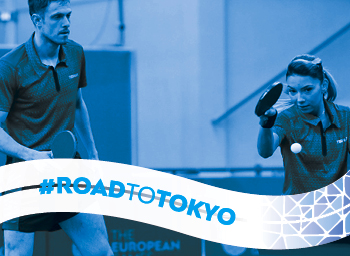 Athletes in karate, skateboarding, sport climbing and surfing won’t be the only ones making their Olympic debuts at Tokyo 2020. Table tennis players competing in the mixed doubles event are also set to write their names in the Olympic history books this summer.

The mixed doubles competition is new to the Olympic Games this year, and will see 16 teams compete for gold on 26 July at the Tokyo Metropolitan Gymnasium.

One of the European teams aiming to reach the podium is the Romanian duo of Bernadette Szocs and Ovidiu Ionescu, who are currently ranked 10th in the world. In addition to having won bronze medals together at the 2012 and 2016 European Championships, the pair won silver at the European Games Minsk 2019, which they both agree was the perfect springboard to the Olympic Games.

“It was the best experience in the mixed doubles,” says Szocs of her time at Minsk 2019. “Because we had many hard matches, we played very well and we fought to the end … and that competition gave us a greater confidence to get even closer to qualifying for Olympic Games.”

“In Minsk we missed direct qualification for Tokyo by losing the final,” Ionescu adds. “But the matches we played and the second place we won … for me Minsk was a success. I learned how to cope with the tension. Mixed doubles is a new event, always being two people involved you have to learn how to adapt to your partner, how to make the schedule. For sure we will take this experience to Tokyo.”

Szocs and Ionescu eventually secured their place at Tokyo 2020 as a mixed doubles team three months ago when the official announcement was made by the International Table Tennis Federation (ITTF). Both had already earned their tickets to Tokyo, with Ionescu competing in the men’s singles and Szocs set to fight for the women’s singles and women’s team titles.

But with Chinese athletes dominating Olympic table tennis – they have won 28 of the 32 gold medals available at the Games since table tennis was included on the sports programme at Seoul 1988 – Szocs and Ionescu believe the mixed event is where their best shot at winning a medal is.

“I do believe now we have the best possible chance to get a medal either in the women’s team event or in mixed doubles,” says the 32-year-old Ionescu. “To beat China in the Olympics is the ultimate goal. And I do believe we are more ready than ever.”

“To participate in the first Olympic mixed event is an honour,” Ionescu continues. “I am very proud of us and after all our past results I know we are able to achieve big things in Tokyo.”

Szocs agrees: “I am proud that we qualified for the mixed events because we have been mixed together for many years and I really felt that we would be able to qualify and that we deserved it. It is an honour to participate in the mixed events as this has not happened before, and especially to know that we are in the top 16 best in the world!”

This will be the second Olympic Games for both Szocs and Ionescu, having both competed at Rio 2016. As with their experiences during Minsk 2019, the duo say they learned a great deal at their first Olympic Games that they will carry with them into Tokyo 2020.

“In Rio I learned how to adapt to new situations,” Ionescu says. “It doesn’t matter how many Europeans or World Championships you have played in, the Olympic Games are totally different. Is a lot of pressure but being surrounded by the world’s best athletes and my time in Rio makes it all easier for me.”

Szocs says Tokyo and Rio will be like night and day due to the sheer number of events she qualified for this summer. “It is a big difference because at my first Olympics I participated only in teams, and this time I will participate in three events – what I always dreamed of. It is an accomplished goal, and of course it makes me want to prove that I really belong and give my all to win the medal!”

Joining Szocs and Ionescu on Team Romania in Tokyo will be Elizabeta Samara (women’s singles and Bernadette’s teammate in the women’s team event), and the women’s team of Daniela Dodean Monteiro and Irina Ciobanu. It will be Romania’s largest table tennis contingent at an Olympic Games and certainly points to a purple patch for the sport as the country goes in search of its first Olympic table tennis medal.

“I can’t say this is a golden age [of Romanian table tennis] as over the years we always had great athletes,” says Ionescu. “Behind these results is the support we always get from our National Olympic Committee and the national federation. They are always behind us and we just need to focus on practicing hard and on the goals.”

The goal now is clearly on Tokyo 2020 and bringing home a medal or medals. For Szocs, one trip to the podium would be nice, but three times would be even better: “My goals are of course to win at least one medal at the Olympics,” she says, “and, if possible, a medal at all the events.”

“The goal is to win the first Olympic medal in history for Romanian table tennis,” adds Ionescu. “It doesn’t matter what colour it is.”

“It will be a dream come true. As I started to play table tennis, I was always following the Olympics … and of course you want one day to become a hero for your country. We struggled a lot with medals at recent Olympics, and by winning a medal in Tokyo it will prove once again that Romania is a country full of talent and winners.”