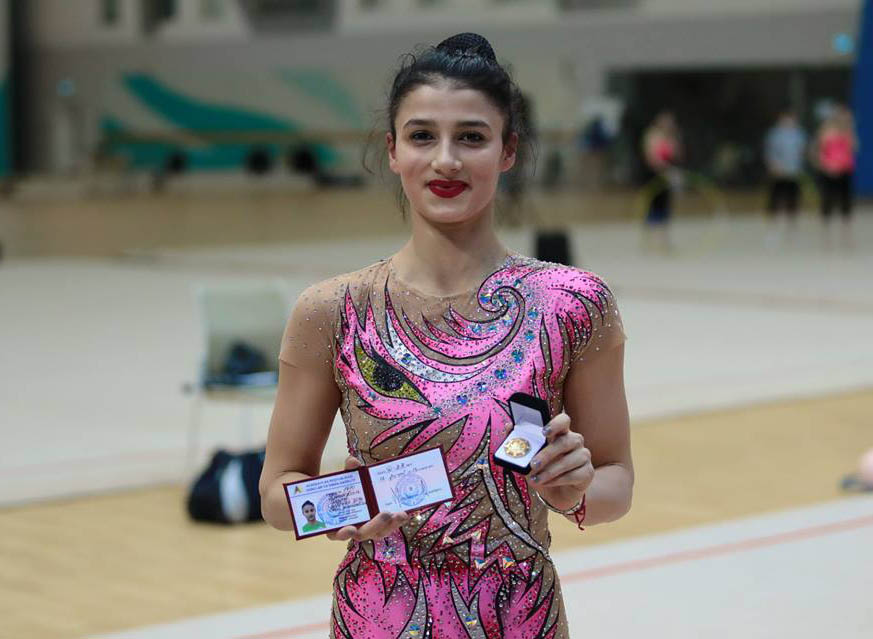 NO OBSTACLE TOO TOUGH FOR AZERBAIJANI GYMNAST ON ROAD TO TOKYO

By this measure, Azerbaijani rhythmic gymnast Zeynab Hummatova is elite-level, having experienced a string of setbacks throughout her sports career but each time found the strength to come back stronger than ever.

“We women can overcome any challenge,” the 21-year-old says, adding that sport is the perfect outlet for goal-oriented, hard-working women.

She should know. Having practised gymnastics since the age of 6, Hummatova quickly rose up the ranks and was invited to her first national team training camp at the age of 10. Unfortunately for Hummatova, she suffered an injury prior to camp but took part anyway, training through the pain. While she wasn’t at her best because of the injury, she did enough to impress chief national coach Mariana Vasilyeva, who invited her back to the national team for good two years later.

“In general, sports allow athletes to develop a very strong character,” says Hummatova, who credits gymnastics for teaching her determination, purposefulness, courage, endurance and a strong mindset – all traits she has come to rely heavily on during her 15-year sporting career, which will culminate this summer with her first trip to the Olympic Games at Tokyo 2020.

She has come a long way since her early days with the national team, which she says were the most difficult for her. Because of her injury, she was older than her peers when she joined the team, which affected her self-confidence and drive to succeed. At one point she even considered retiring from the sport.

But on the advice and encouragement of her trainer, Mariana Khanum, she had a change of heart and decided to continue with gymnastics, only this time in aerobic gymnastics.

After finishing 5th at the 2017 World Championships, Hummatova opted to return to rhythmic gymnastics – with the senior national team, no less – and the rest, as they say, is history.

Hummatova does not take any of her success for granted. Her string of injuries and successive comebacks preclude it.

After qualifying for the Olympic Games, she once again fell prey to injury, this time requiring surgery and a three-month layoff. Or so the doctors assumed. Thanks to Hummatova’s strong willpower and desire to join her teammates in preparing for Tokyo 2020, she returned to training only six weeks after her surgery.

Having competed solo and as part of a team, Hummatova says she enjoys the source of strength she receives while working with her teammates. “We support and motivate each other, we are working hand in glove and would not be complete if any one of us weren’t there,” she says, adding that the biggest difficulty of team gymnastics is getting all five individual athletes to become totally in sync with each other, which often means using a single gesture or facial expression to communicate.

As Hummatova and her teammates gear up for Tokyo 2020, they are also excited to compete at the upcoming European Championships and World Championships. Further down the road they hope to finish on the podium at the European Games Krakow-Malopolska 2023 and the next edition of the Islamic Solidarity Games in Konya, Turkey.

“My main objective this year is to honourably represent Azerbaijan at the Olympic Games,” she says. “Notwithstanding all the challenges and the course of the day, when I get on the mat I remember that I am representing my country and no matter how I feel, I am obliged to represent my homeland honourably. Sports make you a stronger person.”