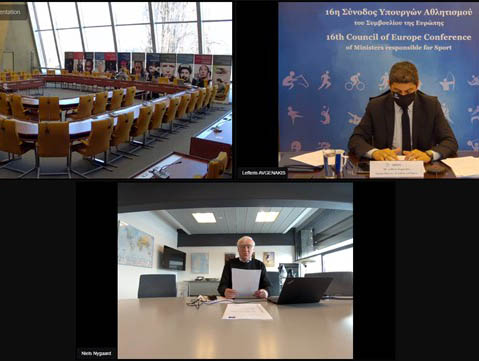 Acting President of the European Olympic Committees (EOC) Niels Nygaard today spoke passionately in defence of the European Sports Model during the Closing Session of the 16th Council of Europe Conference of Ministers Responsible for Sport.

Declaring that the European Sports Model was coming under increasing threat from parties interested only in money and not on development, Nygaard said: “Let me be clear. Sport in Europe is at a crossroads. The COVID-19 pandemic has once again clearly shown the contribution that sport makes to our society in social, health and economic terms.

“The basis for this contribution are the clubs and the millions of volunteers who make sport the largest social group in Europe. The interplay between grassroots and competitive sport is an essential element that distinguishes us from an exclusively commercialised sports model.”

Nygaard went on to highlight the main tenets of the European Sports Model, which are:

“Some of the key elements of the European Sport Model are at stake,” Nygaard continued. “The openness of competition based on promotion and relegation of teams according to their sporting merits is at stake. The release of best players to play for their national teams is at stake. The safety and integrity of sport is at stake. And last but definitely not least, the solidarity between top and grassroots level is at stake.”

“For these reasons, we keep on reiterating and repeating our message on the need to preserve the European Sports Model. A strong European Sports Model, supported by robust solidarity funding mechanisms and managed by well-governed federations, is also key to enabling you, public authorities, to deliver your policy objectives for sport in Europe.”

The Conference, held online over five sessions as a result of the pandemic, was initially scheduled to be held in Athens from 4-6 November 2020.

Earlier at the Conference, General Director of the International Olympic Committee (IOC) Christophe de Kepper also spoke of the merits of the European Sports Model, in particular during the pandemic: “More than ever, the (coronavirus) crisis has made it clear that sport is a low-cost, high-impact tool that aids all countries in their recovery efforts towards mentally and socially fit societies,” he said. “The second key learning from this crisis is the emphasis on the need for solidarity among the sports movement. Without solidarity, clubs and associations at the base of the European Sports Model cannot survive. And the huge contribution they make to their communities and to elite sport will be lost.”

The 16th Council of Europe Conference of Ministers Responsible for Sport adopted two resolutions on the following themes: 1) progress on the third revision of the European Sports Charter, and 2) a statement on the role and application of human rights in sports. All documents from the Conference can be found here. More information and links to the presentations can be found here.

Also speaking at the Closing Session today were Council of Europe Deputy Secretary General Gabriella Battaini-Dragoni and Deputy Minister of Culture and Sports of Greece Lefteris Avgenakis, who chaired the meetings.