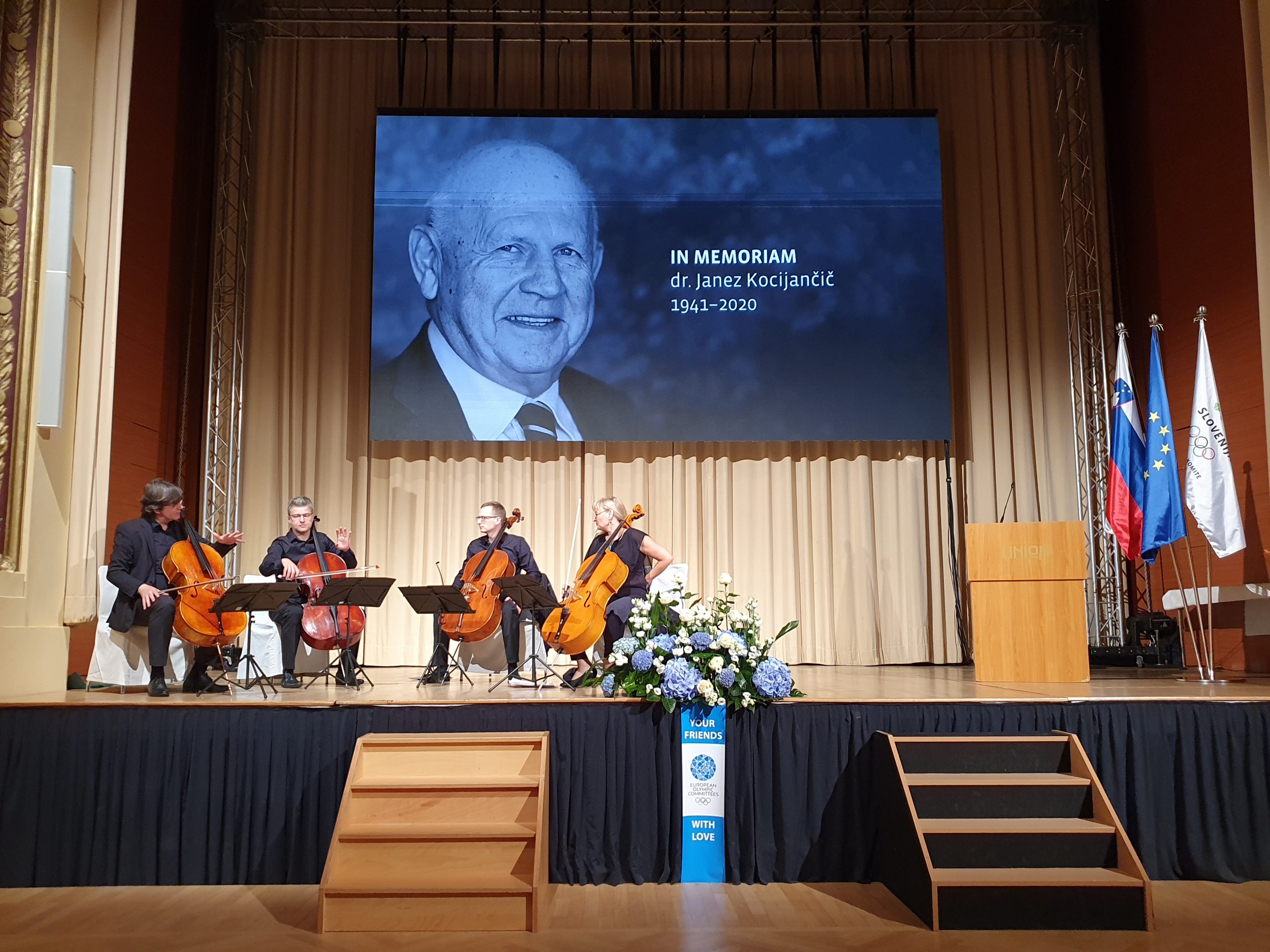 In a moving memorial service held today at the Grand Union Hotel in Ljubljana, Slovenia, friends, family and colleagues from around the world paid their final respects to European Olympic Committees (EOC) President Janez Kocijančič, who passed away on 1 June.

“The Olympic Movement of Europe has lost a great leader and we have all lost a dear and kind friend,” said EOC Secretary General Raffaele Pagnozzi. “He was a profound believer in the power of sport for good, and tirelessly worked to promote Olympic values and ideals in the certainty that they can help provide our youth with a better tomorrow. He did so with unparalleled wisdom, and we pledge to continue his good work in honour of his memory.

“Aside from his outstanding qualities as a leader, his immeasurable knowledge of sport and of the Olympic Movement in particular, Janez was an immensely kind and compassionate person, a characteristic that endeared him to everyone who worked with him.

“Ours is a great loss but nothing compared to the loss his death represents for his family. Our Olympic solidarity, a value so close to Janez’s heart, thus goes to his family, and in particular his beloved wife Andreja and their children.”

The ceremony was attended also by officials from the International Ski Federation (FIS), of which Kocijančič was a member of the FIS Council since 1981 and 1st Vice-President since 2010.

In a touching video tribute, International Olympic Committee (IOC) President Thomas Bach said: “With our friend Janez Kocijančič, our Olympic Movement has lost a great, great ambassador for the Olympic Values and I personally have lost a true and long-time loyal friend … He was a true European. A true European who looked beyond the borders of the European Union, including all countries and cultures of European origin. This made conversations with him always inspiring and interesting because of his rich knowledge of culture, literature and science.”

Miroslav Cerar, double Olympic champion in gymnastics who together with Kocijančič was one of the founding fathers of the Slovenian Olympic Committee (SOC), said he remembered Janez as “a constant guiding presence in Slovenian sport and an esteemed figure abroad … Ever creative and decisive, you were also tolerant, brimming with energy and wisdom. You knew how to listen and give weighty arguments that proved invaluable to us.

“During your time at the helm of the SOC, Slovenian athletes achieved more than we ever dared hope and Slovenian sport became a true social phenomenon, fostering a strong feeling of national unity.”

The memorial ended with Kocijančič being officially awarded the Olympic Order, which was mandated by the IOC Executive Board last month. The highest IOC award for achievement in sport, the Olympic Order was presented to Kocijančič in recognition of his “outstanding achievements in the course of world sport and his faithfulness to the Olympic ideal as illustrated by Pierre de Coubertin, the renovator of the modern Olympic Games.”

The award was accepted by Janez’s wife, Andreja, and daughter, Nike, and presented by special IOC envoy, Zlatko Mateša, who is also President of the Croatian Olympic Committee, together with President of the Slovenian NOC Bogdan Gabrovec.

Click here for a video of the memorial service, here for a selection of photos.

An EOC video tribute to President Kocijančič can be found here.