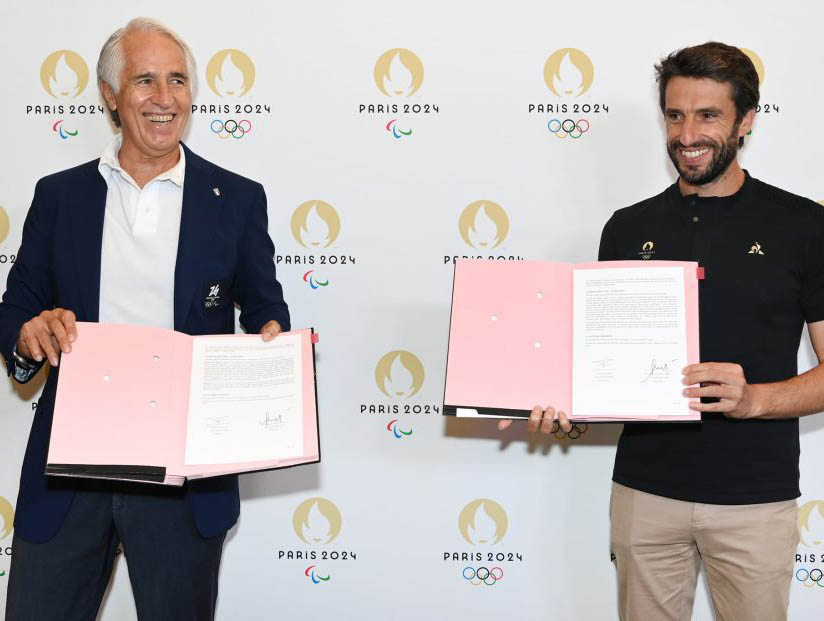 With six more days before the curtain falls on the Olympic Games in Tokyo, Europe is not waiting to prepare the next Games and decided to move forward together.

The Organising Committees (OC) of Paris 2024 Summer Games and Milan-Cortina 2026 Winter Games have chosen to join forces by signing a cooperation agreement in the Japanese capital on 3 August 2021.

The approach is not new. Paris 2024 has already concluded a similar agreement with the Californians of Los Angeles 2028. The Asians of PyeongChang 2018, Tokyo 2020 and Beijing 2022 had also concretised their will to share expertise and knowledge through similar deals.

But the French and Italians are not hiding it: they want to go further. Their partnership is intended to be concrete and practical and, above all, it does not exclude any area of expression.

“We have a common will to leave a legacy in society, especially for the practice of sports in schools. A legacy for the people,” explains Tony Estanguet. “Time has come to propose a new model for the Olympic Games, more sustainable, with a better use of existing facilities. We want to share everything that can be shared.”

Giovanni Malagò, President of the Milan-Cortina 2026 Organising Committee and of the Italian National Olympic Committee (CONI), welcomes the agreement with the same enthusiasm. “We want to learn a lot from Paris 2024, because France is France, Paris is Paris, and Tony is … Tony,” he suggests with humour. “We have our respective personalities, but we have in common, Italians and French, a touch of class. With Paris 2024, we will be the first two Games to put the IOC’s New Standard into practice”.

Paris 2024 and Milan-Cortina 2026 want to take advantage of their common culture, but also their geographical proximity, to build bridges rarely imagined in the Olympic movement. The French team plans to open to the Italians their observation programme, which is usually rather intended for the host city of the same season’s next Games. The Italian team could send some of its members to settle at Paris 2024’s OC headquarters several months before the event, for instance in the technology department.

Another idea is also bringing Los Angeles 2028 on board so as to develop digital apps together, for example for transportation. This approach would have multiple benefits, while also reducing costs. The IOC will appreciate it.

“We are not forbidding ourselves anything,” explains the Paris 2024 OC. “Let’s all see what can be useful to each other”. Another example: the torch relay. Combining the two events would have the merit of giving Paris 2024 a European dimension. The idea would also make the mobilization of the Italian people around the Olympic cause easier, eighteen months before the deadline.