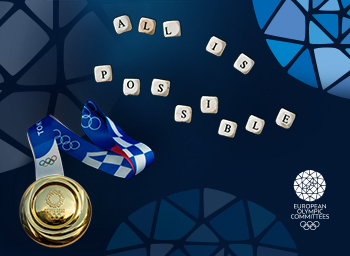 The Olympic Games never fail to create new superstars and national heroes, and Tokyo 2020 is no exception so far as the Games reach their midway point today.

With eight days of competition already completed, 37 European NOCs occupy a place on the medals table, with the Russian Olympic Committee leading the pack having already won 11 gold, 15 silver and 11 bronze medals.

European athletes have featured prominently in the headlines so far, including the incredible solo ride by Austria’s Anna Kiesenhofer in the women’s cycling road race, where she claimed Austria’s first cycling medal in 125 years. Alessandra Perilli of San Marino, meanwhile, won the first ever Olympic medal for her country when she secured bronze in the women’s trap shooting final.

Other highlights saw Switzerland complete a clean sweep of the podium in the women’s mountain bike, with Jolanda Neff leading home Sina Frei and Linda Indergand – the first time this feat has been accomplished by Swiss women in any Olympic event.

The waterways continued to be fruitful for European athletes, with Stefanos Ntouskos winning Greece’s first Olympic rowing gold medal and setting a new Olympic record in the process.

Week 2 of the Games is undoubtedly going to create more fantastic moments of sporting history for Europe. Follow all the action here.