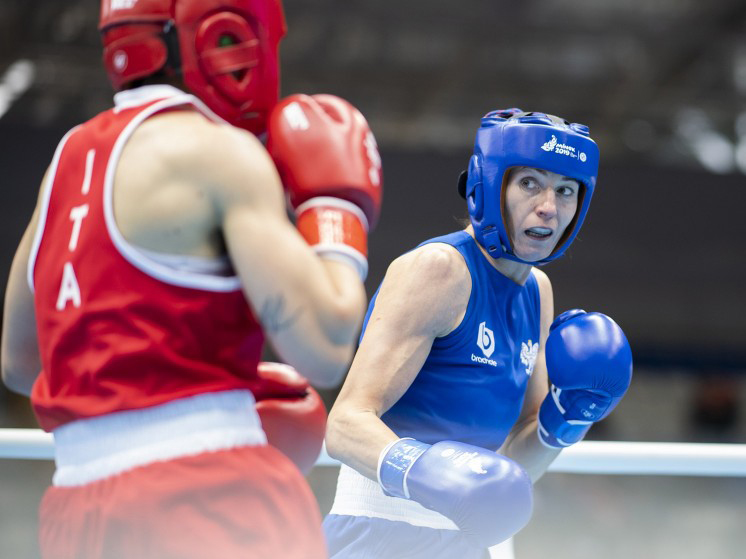 Fifteen years after being crowned European Champion at the 2005 Women’s European Amateur Boxing Championships, Poland’s Karolina Koszewska (née Łukasik) returned to the top of the podium last month at the European Games Minsk 2019.

The 37-year-old mother of two beat Assunta Canfora of Italy 4-1 in the women’s boxing welterweight -69kg final to add European Games’ glory to the gold she won in Tønsberg, Norway (2005), the silver she took in Pécs, Hungary (2003) and the bronze she finished with in Riccione, Italy (2004). Professionally, Koszewska was once owner of the WIBF, GBU and WBC world champion belts, while also laying claim to the WBA title on an interim basis.

The Polish Olympic Committee caught up with Koszewska not long after her European Games’ victory to ask her what it felt like to be queen of the continent again, the battles she had to overcome to get there, and her thoughts about possibly competing at the Olympic Games Tokyo 2020.

Q: Tell us a little about all the twists and turns in your sports career. It’s been a long and winding road!

A: I come from a very sporty family with a boxing tradition. My dad was a boxer, as well as my older brother, who was successful in junior categories. I started my adventure with kickboxing, winning the title of Polish champion and twice world champion.

When women’s boxing started in Poland, I joined right away. I went to the first competition, won and found that it was the sport for me. From 2001-2005 I boxed at the amateur (Olympic) level, then I went professional until 2008, but I stopped because I got pregnant.

In 2015, I decided to return to the ring after my maternity break, and I had two fights. But I was discouraged by poor funding and the lack of interest for subsequent fights, so just to maintain myself I started to train amateur boxers.

Fortunately, due to changes in regulations in 2017, I was able to return to Olympic boxing. Before this change, if a competitor ever fought professionally, she could no longer return to amateur-Olympic fights. Two people benefited from this opportunity to return in Poland, including myself.

Q: What did it mean for you to go to the European Games? What result did you expect there?

A: When I decided to return to the amateur ring two and a half years ago, I dreamt about going to the Olympic Games. I thought that this road would be much easier [than it is], but I still believe that I can do this. I really like to train, I like trips, sports camps and fights. I thought that the European Games could offer me a foretaste of [the Olympic Games], but I didn’t have any specific achievement in my head going into Minsk.

Q: Your appearance in Minsk, however, was suddenly put in doubt …

A: My mother struggled with cancer for many years, and in the months [leading up to the European Games] she was very weak, so it kind of prepared us for the worst.

My mother died just before my planned departure for the European Games. I was at her bedside, we said goodbye. I had to make the very important decision whether I would stay for the funeral or go to fight in Minsk. My mother helped me a lot in the whole process of preparing for the European Games – she supported me very much. She wanted me to live through the magic of these Games. That is why I want to dedicate this medal to her.

For the first time I saw somebody die after I gave birth to my two children. Life has come full circle for me. It strengthened me a lot. When I went into the ring in Minsk, I thought that it was only a fight, it was so easy, and I won. I know that my mother would be very happy with this gold medal, that’s why I want to give it to her. The medal will be made into a memento with the inscription “For you mom.”

Q: What are your plans for the near future?

A: Another sports camp. I don’t want to think very far into the future, I live from tournament to tournament. I don’t know what will happen to my children now, because my mother was always with them while I was training. They have to stay with me at the next camps. But I have revived the idea of appearing at the Olympic Games, which are next year in Tokyo. I would love to qualify for them.