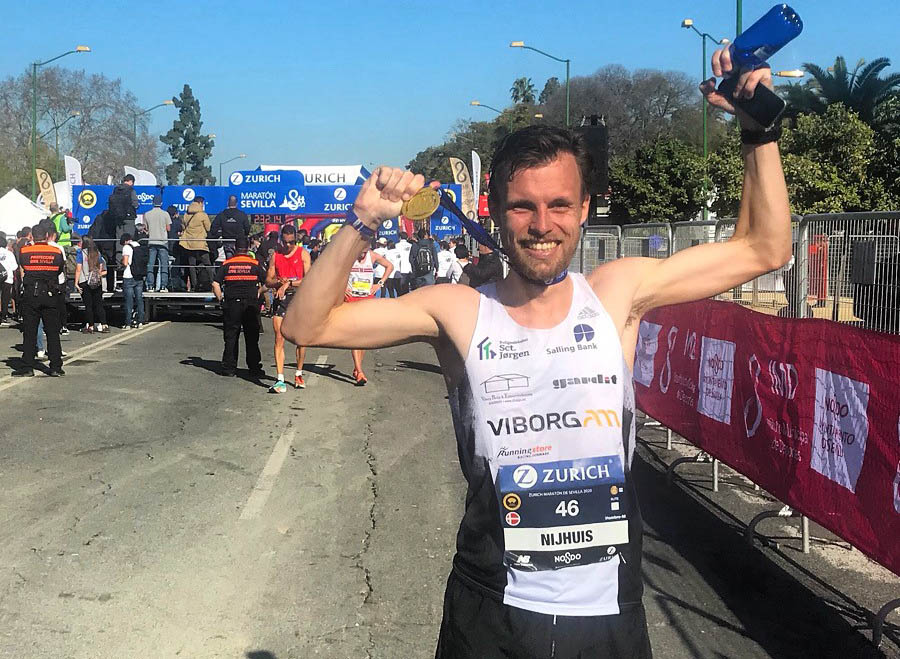 PROMISING PROGNOSIS FOR DANISH DISTANCE STAR ON ROAD TO TOKYO 2020

Not long ago he was concurrently the national champion in every distance from the 1500m through to the marathon, a feat he accomplished after posting a Danish record in the first marathon he ever competed in back in 2018.

The 28-year-old, who has been focusing on running the longer distances since his impressive marathon debut, qualified for his first Olympic Games during the Seville Marathon early last year.

Qualifying for any Olympics can be a gruelling task, but imagine needing to shave almost three minutes off your personal best to do so. He did just that in Seville, running a PB time of 2:10.57 that was a full 33 seconds inside the qualifying time required for Tokyo 2020.

“I certainly thought I could do it,” he says when asked about his experience in Spain. “I had put down a good training block over the summer and finishing 31st in Doha at the World Championships in 2019 showed me I was on the right track. During the race in Seville there was a group of 20 people all aiming for that Olympic standard, which was great.

“The last kilometres of the race were gruelling but when I saw the clock with 300-400m to go I knew I made it, and I soaked up the entire experience. Crossing the finishing line was amazing, I pumped my fists up in the air and fell to my knees, where I shed a few tears. All the hard work over the last decade just seemed to be justified in that moment.”

Nijhuis has been a familiar face on the international athletics scene since finishing tenth in the 10,000m at the European U23 Championships in 2013. He has compiled a glittering array of medals and trophies ever since.

And despite never having run a marathon until his mid-20s, Nijhuis always had an inkling that he might one day be on the path he is currently on. “My first Olympic memory that really stands out is the 2004 Athens marathon where Brazilian runner Vanderlei de Lima, who was leading the race, gets pushed off the course [by a spectator] leaving Stefano Baldini [of Italy] to win the race,” Nijhuis says. “This made me think that everything and anything can happen in a marathon. At age 16 after running for some years, I told a local newspaper that my dream was to make the Olympics in the marathon.”

Having now achieved his dream, Nijhuis is relishing his chance to run at Tokyo 2020. “I will focus on competing and beating as many of my competitors as possible. I will make sure that I have prepared myself the best possible way and then stick to the race plan.”

Best-laid plans don’t always materialize, however, as the postponement of the Games has shown, but Nijhuis has been able to train in warmer weather in Kenya and largely avoid the negative impact of the yearlong pause in operations.

Although it has been almost impossible for Nijhuis to find races to compete in lately, he has brushed it off with characteristic aplomb, confident in the knowledge that one of his greatest strengths is his discipline to train – rain or shine, alone or in groups. He admits that when he started in athletics, he was not the strongest or most talented runner, but his work ethic always made up for it.

The same work ethic will see Nijhuis become a doctor soon, as he is close to finishing his studies at the University of Aarhus. He credits his school for allowing him the time away from classes to focus on chasing his Olympic dream. “The university has given me really good conditions to be an athlete and I’ve decided to go part-time so that I hopefully can make another Olympics [in 2024]. I’m aware that once I’m a doctor, the time to dedicate to running will become a bit more difficult to plan into my daily schedule. This is the reason that I want to focus 100 per cent now before switching gears later in life.”

Having experienced the punishing weather conditions of the World Championships in Doha in 2019 and acclimatized further in Kenya, Nijhuis says he is fully prepared for the hot temperatures in Sapporo, where the Tokyo 2020 marathon will be staged. He is excited to get the opportunity to establish himself as one of Europe’s best in an event traditionally dominated by runners from African nations.

The prognosis for Nijhuis is promising and all of Denmark will be anxiously awaiting the final results of his 42.2km Olympic challenge.