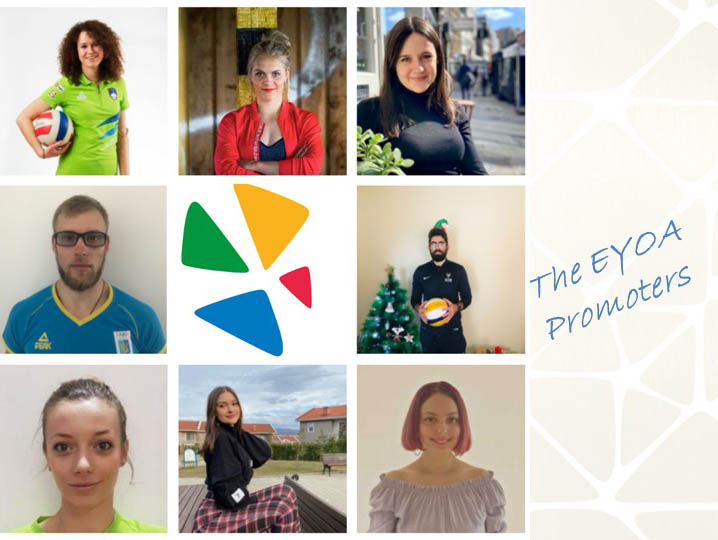 Three months after the start of the programme in September 2020, the new group of European Young Olympic Ambassadors (EYOA) from 24 countries is meeting regularly in live webinars to pursue the goals of the programme and preparing themselves to deliver educational activities for athletes during the original dates of the EYOF 2021 in Vuokatti. One feature of this edition is that all activities will take place online and all members will interact with each other in a virtual space. This new format offers an excellent opportunity to reach out to the athletes through various communications channels and to build an online community that will learn to cherish the Olympic Values in a digital way.

The EYOA are divided into three functional groups with each group focused on a different aspect of the programme as Promoters, Facilitators, and Reporters. The idea of this initiative is that athletes first need to learn about the programme (the task of Promoters), then to actively participate in activities with the help of their teammates and mentors (the task of Facilitators), and finally to give feedback on what have they have learned and how they have engaged with the Olympic Values (the task of Reporters).

Let us introduce you to the members of the first group – the group of Promoters. The main activities of the Promoters group are to find creative ways to spread the word about the activities, to engage and motivate athletes to take part in the EYOA programme, and to create a promotional plan for the project.

Ilayda Develioglu (22) from Turkey loves the sport of tennis and plans to pursue her academic career in the field of sport. “We should not resist the changes that come our way, but rather let life live through us and not worry that sometimes life turns upside down.” Ilayda believes that her role as an EYOA will help her to establish new friendships and live the spirit of the EYOF.

Lena Gabrscek (26) from Slovenia speaks five languages and is passionate about volleyball, hiking and reading. Her advice to everyone is “be proud of who you are and let a smile be your best friend.” Lena views Olympism as an opportunity to “become the best version of yourself” and hopes to extend her network as well as gain new knowledge by being an EYOA.

Claudia Mestre Moreno (24) from Spain has been living in Great Britain for the past seven years. She is currently working for Team Great Britain within the Marketing Department. Claudia speaks an impressive number of languages (six). Claudia explains her motivation to participate in the EYOA project, “I wanted to be part of a group of inspiring, like-minded people who love sports and want to make a difference through sport and education.” Her goal matches those of the programme, to “see sport as more than just competition, as a way to create friendships, celebrate the joy of effort, and be a role model in society.”

Era Shala (17) from Kosovo is an alpine skier who was part of the 2020 YOG. Ski racing, swimming, and hiking top her list of most favorite activities. By participating in the EYOA project, Era wants to “be part of the sport’s community and to help people make good changes as well as be helpful to those in need.” Era supports the idea that “one fails only when they stop trying” and encourages athletes not to give up even when sometimes there are challenges.

Dmytro Mytsak (25) from Ukraine is another alpine skier who first participated in the EYOF in 2011. Dmytro went on to participate at the 2012 YOG and the Olympic Games Sochi 2014. He is passionate about Olympism and is already actively helping to promote the Olympic Movement in Ukraine by staging Olympic lessons and managing an alpine skiing school for about 120 children.

Mario Albaladejo Saura (25) from Spain is a Ph.D. student who would like to develop his career as a researcher. He describes himself as an active person who besides practicing volleyball, loves to play paddle and spend time in the nature. He considers Rafael Nadal as one of the best examples to follow and is sure that “hard work always pays off” – both in sports and in life. Mario says: “I will try to help athletes experience an unforgettable and enjoyable time during the EYOF.”

Emina Hadziahmetovic (25) from Bosnia and Herzegovina is a table tennis player. She is currently pursuing her master’s degree in International Relations at the International University of Sarajevo. The ability to exchange knowledge, sports experience, and to meet new people and cultures is something that attracted Emina to become an EYOA.

Hilla Hannola (22) is an alpine skier from Finland who retired in 2019. Currently Hilla works as a coach and also practices CrossFit. She is passionate about studying medicine and would like to become a medical doctor. “Eventually hard works pays off”, remarks Hilla who is keen to learn new things and stay positive. Unity, equality, and great sportsmanship are the values that Hilla believes encompass the wider meaning of Olympism.

This group of ambassadors is coordinated by three alumni participants: Christopher Papamichalopoulos from Cyprus, Anna-Maria Pollany from Austria, and Barbora Mokosova from Slovakia. Christopher and Anna-Maria have been a part of the programme since 2017 when they participated in the first edition of the EYOA project at Erzurum 2017. Barbora joined the project as part of the 2019 EYOF in Baku.