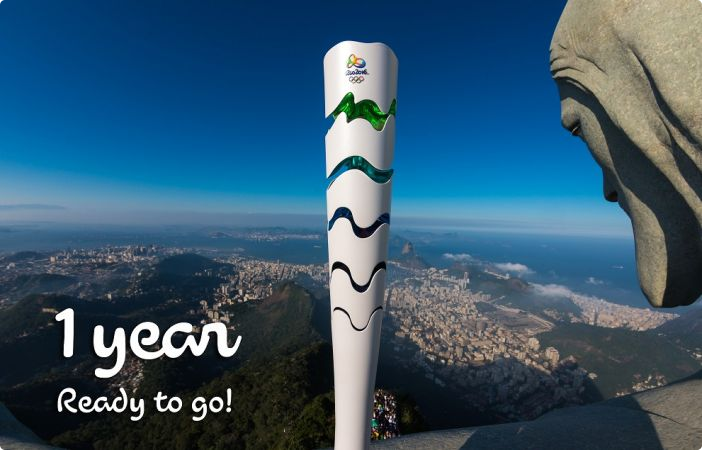 Rio de Janeiro, August 5, 2015 – Twelve months before staging world’s greatest sporting event, Rio 2016 looks at what has been achieved and what is still to come. The official website of the 2016 Olympics focuses on the various initiatives launched besides the Games organisation.

Since Rio won the right to host the Games, in 2009, the organising committee has worked on many initiatives in various areas:

1. Taking the Games into schools

To increase its reach, the programme launched in August, in partnership with the Ministry for Education, a long-distance online teaching platform, in Portuguese, English and Spanish.

2. Inspiring volunteering in Brazil and around the world

The volunteer programme, launched in 2014, had over 240,000 sign-ups from all states in Brazil and another 192 countries. The United States, Russia, China and Great Britain were the nations with the most candidates after Brazil.

This year the list of selected candidates will be published, and the training phase begins in February 2016.

Rio 2016’s objective is to have, by 2016, 70,000 licensed companies that will supply 40,000 sale points, as well as 150 official stores in airports, shopping centres, hotels, the athletes’ village and at all Games venues. Three stores are already open in Rio de Janeiro and there is also an online store in Brazil.

By the end of the year, more stores will be opened at airports in Rio and São Paulo, as well as shopping centres in Rio. The expectation is that by next year, thousands of different types of products will have been developed, which should generate R$1 billion in Brazilian retail.

4. A torch to inspire a nation

The concept of the Rio 2016 Olympic torch was presented at the beginning of 2015, with the union between the Olympic flame and the warmth of the Brazilian people being the central notion. The relay will begin with the traditional lighting ceremony in the Greek city of Olympia, birthplace of the ancient Games.

By the end of 2015, Rio 2016 will announce all the cities where the relay will pass through. At the beginning of 2016, the organising committee and sponsors will announce who the 12,000 torchbearers will be.

The Rio 2016 Games will create 85,000 contractor jobs, the majority of which will be in the service sector.

Rio 2016 signed an agreement with the Support Foundation for the Technical School (FAETEC), which will train 270,601 applicants for roles with the Games. Of this group, 85,000 will be selected for jobs related to the Games.