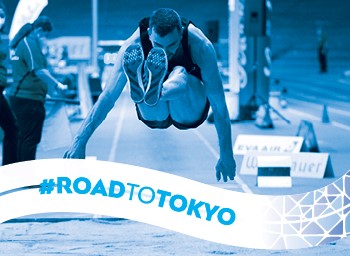 Izmir Smajlaj has made quite a name for himself in Albania.

He’s been national long jump champion for 18 straight years, held the national record for 14, and is also the only Albanian athlete to have won a major athletics championship, a feat he accomplished by claiming gold at the 2017 European Indoor Championship in Belgrade.

This year he’s aiming to level up even further by medalling at the Olympic Games Tokyo 2020, which will be his second Games after Rio 2016.

“It was and is always an honour to be part of such a great competition, and the fact that I will be participating in Tokyo, it helps me achieve more of the goals I have for my sport career,” says Smajlaj, who in April was also unanimously elected Athletes’ Representative on the Executive Board of the Albanian National Olympic Committee. “Of course, five years have passed since Rio [where he finished 21st] and now I’m more prepared and confident in what I want to achieve at this Olympics.

“My goal for Tokyo is to reach the final, and I certainly expect a good personal best result. Maybe with a bit of luck even a podium finish!”

Smajlaj’s legendary status at home would certainly be cemented should that happen, as it would be Albania’s first Olympic medal since the country first took part at the Olympic Games at Munich 1972.

It’s an almost 50-year drought the 28-year-old would love to put an end to this summer.

“Albania is a small country, and I have already entered in the history of Albanian sport as the first European Champion with clear results and records,” he says. “But if I was to win an Olympic medal, it would be the greatest achievement of my sport career and the country I represent will be really proud of me.”

It already is. In addition to his national heroics and European title, Smajlaj is also a four-time Balkan Champion, a 2018 Small States of Europe champion, and a rather proficient triple jumper to boot, with the national record in that discipline also belonging to him.

The COVID-19 pandemic clearly threw a spanner in the works for all Olympians last year, with the most obvious upheaval being the postponement of Tokyo 2020 by a year. Smajlaj says that while his daily routine was turned upside down and he became frustrated with so many competitions being cancelled, he has gradually found his groove again, evidenced by the four competitions he has already won in 2021 in Vienna, Istanbul, Belgrade and Tirana.

“It is true that I have won 4 gold medals in difficult competitions this 2021 winter season,” he says. “Truth is that I’m feeling good, and I am training intensively to be part of the Olympic Games, where I do believe that I’ll be in the finals.”

That’s the kind of winning mentality Olympic champions tend to possess. And his positive mindset is all the more impressive considering that he was side-lined by injury only a few months ago. “Sport has its difficulties, and among them are injuries,” he says. “I suffered a meniscus tear during a competition and underwent surgery in August 2020. I recovered slowly, but fortunately right now I’m feeling better, and my knee is also in good condition.”

“I am grateful to have an Olympic scholarship,” he says. “This scholarship has helped me in training as the sport conditions in Albania aren’t the best … Albania does not have a closed long jump hall and I am forced to train every winter in another country in Europe. Thanks to this scholarship I had the budget to spend for this purpose, helping me to train and develop my sport performance in every season.”

It has all clearly paid dividends judging by his recent results. Results that his coach believes could see Smajlaj win that elusive first medal for Albania in Tokyo.

“I’m training with the best long jump trainer, who is also the President of the Albanian Athletics Federation, Mr. Gjergj Ruji,” Smajlaj says. “He gives me strength, lessons, and support to reach even better results than my personal best of 8.11m [set in his hometown of Shkodër in June 2019].”

All of Albania will be tuning in to support Smajlaj on his Olympic quest this summer, which would be a massive weight on the shoulders of a lesser athlete. But for Smajlaj, he welcomes the expectations and feeds off the national spotlight.

“Sport is life! I have everything connected to this sport and I’m really grateful that I have achieved the fans’ support, this growing talent and also a clean record to be proud of.”

We wish him all the best in Tokyo!