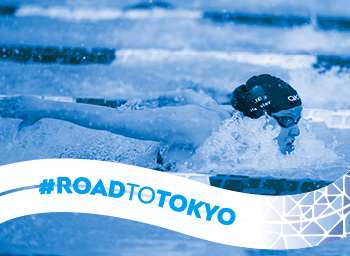 On the eve of her third trip to the Olympic Games this summer, Liechtenstein swimmer Julia Hassler is the personification of contentment.

As the first female swimmer in history to represent Liechtenstein at international swimming events, a 17-time national record holder, her country’s flag bearer at the Olympic Games Rio 2016, as well as a three-time Liechtenstein Sportswoman of the Year, Hassler admits she’s done more in her athletic career than she could have even imagined when swimming her first laps in the pool as a child.

Now 28, Hassler is practically Zen-like as she looks ahead to Tokyo 2020, which will be her Olympic swan song as she prepares to transition into a career in sports psychology.

“Yes, my swimming career is slowly coming to an end,” she says. “I’m not 100% sure if Tokyo 2020 will be my last competition yet, but for sure it will be my last Olympics. I was not sure if I should continue after the postponement of the Games, so now I’m just trying to give my best the last few months and trying to peak at the Games and enjoy every moment.

“Whatever the outcome will be, I reached much more in my career than I could ever dream about.”

Hassler qualified for Tokyo 2020 in April 2019 at the first opportunity, her first time swimming an A-Cut to directly qualify for the Games, where she will compete in the 400m, 800m and 1,500m freestyle events.

Having punched her ticket prior to the onset of COVID-19, Hassler says her training wasn’t as adversely affected by the pandemic as other athletes, and despite certain challenges, she chose to focus on the positives, like being home with more opportunities to see friends and family.

It also gave her more time to devote to her education. In addition to obtaining a master’s degree in psychology, Hassler finished her master’s thesis just a few weeks ago. Her goal post-competition is to “find a job in a company I like as much as swimming.”

“I’m planning to become a sports psychologist to help other athletes and give my experiences from my studies and sports to the next generation,” she adds.

But before she does, there is still one final Olympic Games to attend. With just over 50 days to go, Hassler will be drawing inspiration from her first two appearances at the Games in London and Rio de Janeiro, even though each turned out to be completely different experiences.

“My first Olympics went really well,” she recalls. “I swam a personal best in both my events. Everything was surreal and like a dream. Afterwards I was sure I wanted to experience this again, but I had many setbacks and it was tough.”

So tough that Hassler admits her performance at Rio 2016, where she finished 21st in the 800m freestyle, was so poor that she felt she had barely improved over the four years since London 2012. Disheartened by the experience, Hassler considered quitting the sport – but only after she tasted the joy of swimming one last personal best.

It was a decision that would wind up keeping her in the pool and at the elite level for a lot longer than she may have thought, and not because she was unable to set another personal best time. Quite the opposite, in fact.

“2017 was a complete game changer,” she says. “I made my first final at the World Championships and won a [bronze] medal at the European Championships …. and now I’m still here and just trying to enjoy my last Games and leave my last Olympics with amazing memories.”

Is a podium finish out of the question?

“That would be crazy,” she says, contemplating such a scenario. “It would also be the first medal for Liechtenstein in any Summer Olympics.”

Pragmatically, she adds: “My goals are to perform there at the best of my ability and improve all my times and then we will see how far I can come with that.”

We wish her the best of luck in Tokyo and with her post-athletic endeavours!